Well-regarded by the common people, he was the first king anointed at Frederiksborg Castle chapel as absolute monarch since the decree that institutionalized the supremacy of the king in Denmark-Norway. Christian fortified the absolutist system against the aristocracy by accelerating his father's practice of allowing both Holstein nobles and Danish and Norwegian commoners into state service.

As king, he wanted to show his power as absolute monarch through architecture, and dreamed of a Danish Versailles. He was the first to use the 1671 Throne Chair of Denmark, partly made for this purpose.[2] His motto was: Pietate et Justitia (With piety and justice). 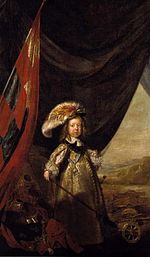 Christian V portrayed as the prince elect in the year 1650, in a painting by Karel van Mander III

The anointing of Christian V in the palace chapel of Frederiksborg Castle, 1671

Christian was elected successor to his father in June 1650. This was not a free choice, but de facto automatic hereditary succession. Escorted by his chamberlain Christoffer Parsberg, Christian went on a long trip abroad, to Holland, England, France, and home through Germany. On this trip, he saw absolutism in its most splendid achievement at the young Louis XIV's court, and heard about the theory of the divine right of kings. He returned to Denmark in August 1663. From 1664 he was allowed to attend proceedings of the State College. Hereditary succession was made official by Royal Law in 1665. Christian was hailed as heir in Copenhagen in August 1665, in Odense and Viborg in September, and in Christiania, Norway in July 1666. Only a short time before he became king, he was taken into the Council of the Realm and the Supreme Court. He became king upon his father's death on 9 February 1670, and was formally crowned in 1671. He was the first hereditary king of Denmark-Norway, and in honor of this, Denmark-Norway acquired costly new crown jewels and a magnificent new ceremonial sword. [3]

It is generally argued that Christian V's personal courage and affability made him popular among the common people, but his image was marred by his unsuccessful attempt to regain Scania for Denmark in the Scanian War. The war exhausted Denmark's economic resources without securing any gains.[4] Part of Christian's appeal to the common people may be explained by the fact that he allowed Danish and Norwegian commoners into state service, but his attempts to curtail the influence of the nobility also meant continuing his father's drive toward absolutism.[4][5] To accommodate non-aristocrats into state service, he created the new noble ranks of count and baron. One of the commoners elevated in this way by the king was Peder Schumacher, named Count of Griffenfeld by Christian V in 1670 and high councillor of Denmark in 1674.[4][6]

Griffenfeld, a skilled statesman, better understood the precarious situation Denmark-Norway placed itself by attacking Sweden at a time when the country was allied with France, the major European power of the era. After some hesitation, Christian V initiated the Scanian War (1675-1679) against Sweden in an attempt to reconquer Scania which Denmark had lost under the Treaty of Roskilde in 1658. As Griffenfeld predicted, Sweden's stronger ally France was the party that dictated the peace with Denmark's ally the Netherlands, and in spite of Danish victory at sea in the battles against Sweden in 1675–1679 during the Scanian War, Danish hopes for border changes on the Scandinavian Peninsula between the two countries were dashed. The results of the war efforts proved politically and financially unremunerative for Denmark-Norway. The damage to the Danish-Norwegian economy was extensive. At this point, Christian V no longer had his most experienced foreign relations counsel around to repair the political damage — in 1676 he had been persuaded to sacrifice Griffenfeld as a traitor, and to the clamour of his adversaries, Griffenfeld was imprisoned for the remainder of his life.[7] 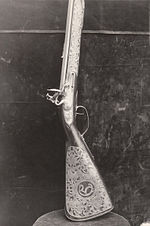 Like Charles XI of Sweden, who had never been outside Sweden, Christian V spoke only German and Danish and was therefore often considered poorly educated due to his inability to communicate with visiting foreign diplomats.[8] Christian V was also often considered dependent on his councillors by contemporary sources. The Danish monarch did nothing to dispel this notion. In his memoirs, he listed "hunting, love-making, war and maritime affairs" as his main interests in life.[7]

During the reign of Christian V, Denmark's trade in cattle that had declined due to catastrophic fires and wars has been restored, and livestock and crop exports have also surpassed Frederick III, with thousands of cattle entering and leaving Jutland through the Oxen Way. After entering and fattening in the Danish King's German enclave County of Oldenburg，the castle reached the big market in Wedel. From there, cattle are resold to all parts of North Germany via Stade, Hamburg and Lübeck. As the population continues to soar at the end of the seventeenth century, demand for beef, grains and fish is increasing, both throughout North Germany and on the Baltic coast alone. In terms of the number of livestock shipped to the South, in 1680 each market had reached 40,000 cattle. Traditional export commodities, including fish and grains, have increased their exports since the beginning of the seventeenth century. The agricultural products exported by Denmark, especially cattle, have made a lot of money from Germany and the Netherlands for the Danish royal family, the aristocrats and the town residents. During his reign, science witnessed a golden age due to the work of the astronomer Ole Rømer in spite of the king's personal lack of scientific knowledge and interest. He died from the after-effects of a hunting accident and was interred in Roskilde Cathedral.[7][10]

Christian V had eight children by his wife and six by his Maîtresse-en-titre, Sophie Amalie Moth (1654–1719), whom he took up with when she was sixteen. Sophie was the daughter of his former tutor Poul Moth. Christian publicly introduced Sophie into court in 1672, a move which insulted his wife, and made her countess of Samsø on 31 December 1677. 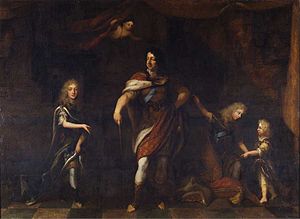 Christian V with his eldest son crown-prince Frederick (IV), and his other sons Christian and Charles