In Christian mysticism, contemplative prayer or contemplation, for which the Greek term θεωρία theoria is also used,[1] is a form of prayer distinct from vocal prayer (the recitation of words) and, strictly speaking, from meditation (a form of mental prayer, also called methodical prayer, based on discursive reflection on various considerations[vague]).[2]

In discursive meditation, mind and imagination and other faculties are actively employed in an effort to understand our relationship with God.[3][4] In contemplative prayer, this activity is curtailed, so that contemplation has been described as "a gaze of faith", "a silent love".[5] 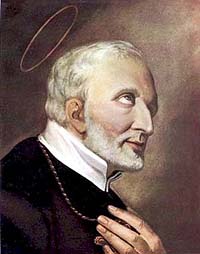 Natural or acquired contemplation, which is also called prayer of the heart, has been compared to the attitude of a mother watching over the cradle of her child: she thinks lovingly of the child without reflection and amid interruptions. In the words of Saint Alphonsus Maria de Liguori, acquired contemplation "consists in seeing at a simple glance the truths which could previously be discovered only through prolonged discourse": reasoning is largely replaced by intuition and affections and resolutions, though not absent, are only slightly varied and expressed in a few words. Especially in its higher form, known as the prayer of simplicity or of simple gaze, there is one dominant thought or sentiment which recurs constantly and easily (although with little or no development) amid many other thoughts, beneficial or otherwise. The prayer of simplicity often has a tendency to simplify itself even in respect to its object, leading one to think chiefly of God and of his presence, but in a confused manner.[9]

Definitions similar to that of Saint Alphonsus Maria de Liguori are given by Adolphe Tanquerey ("a simple gaze on God and divine things proceeding from love and tending thereto") and Saint Francis de Sales ("a loving, simple and permanent attentiveness of the mind to divine things").[1]

"Over the centuries, this prayer has been called by various names such as the Prayer of Faith, Prayer of the Heart, Prayer of Simplicity, Prayer of Simple Regard, Active Recollection, Active Quiet and Acquired Contemplation"[10]

The Catechism of the Catholic Church states: "What is contemplative prayer? St. Teresa answers: 'Contemplative prayer [oración mental] in my opinion is nothing else than a close sharing between friends; it means taking time frequently to be alone with him who we know loves us.' Contemplative prayer seeks him 'whom my soul loves'. It is Jesus, and in him, the Father. We seek him, because to desire him is always the beginning of love, and we seek him in that pure faith which causes us to be born of him and to live in him. In this inner prayer we can still meditate, but our attention is fixed on the Lord himself."[11]

A person is known to be called to natural contemplation because of succeeding in it with ease, and benefitting from it. This is especially so, if the person has a persistent attraction to this kind of prayer together with difficulty and distaste for discursive meditation. Accordingly, when, during prayer, one feels neither a relish nor facility for certain acts it is advisable not to force oneself to produce them, but to be content with affective prayer or the prayer of simplicity. If, on the contrary, during prayer, one feels the facility for certain acts, one should yield to this inclination instead of obstinately striving to remain immovable like the Quietists.[9] 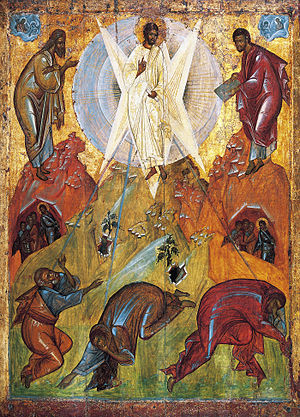 The Saviour's Transfiguration, an early-15th century Russian icon attributed to Theophanes the Greek.

Infused or higher contemplation, also called intuitive, passive or extraordinary, is a supernatural gift by which a person's mind and will become totally centered on God.[12] It is a form of mystical union with God, a union characterized by the fact that it is God, and God only, who manifests himself.[9] Under this influence of God, which assumes the free cooperation of the human will, the intellect receives special insights into things of the spirit, and the affections are extraordinarily animated with divine love.[12] This union that it entails may be linked with manifestations of a created object, as, for example, visions of the humanity of Christ or an angel or revelations of a future event, etc. They include miraculous bodily phenomena sometimes observed in ecstatics.[9]

The dialogical character of prayer is most fully realized in the so-called passive or mystical prayer, in which the divine motion is in the foreground of consciousness and divine love stirs the heart, and the loving majesty of God manifests itself in infused contemplation. Though the prayer is called passive, man is not purely passive in it. On the contrary, one is never so completely and utterly active as when God moves him by the graces of mystical prayer. But in this mystical experience the "divine partner in the dialogue" is in the foreground rather than the human response. In mystical prayer, the soul experiences the life in grace and from grace as a gift of divine love. It is the experience of faith in its most exalted realization.[13]

Infused contemplation, described as a "divinely originated, general, non-conceptual, loving awareness of God", is, according to Thomas Dubay, the normal, ordinary development of discursive prayer, which it gradually replaces.[14] He writes:

It is a wordless awareness and love that we of ourselves cannot initiate or prolong. The beginnings of this contemplation are brief and frequently interrupted by distractions. The reality is so unimposing that one who lacks instruction can fail to appreciate what exactly is taking place. Initial infused prayer is so ordinary and unspectacular in the early stages that many fail to recognize it for what it is. Yet with generous people, that is, with those who try to live the whole Gospel wholeheartedly and who engage in an earnest prayer life, it is common.[14]

The Christian contemplative prayer is discipleship with Jesus.[vague] Hans Urs von Balthasar explains that it does not arise out of a psychological strength but out of the strength to respond to love:

The word contemplative can, of course, be misunderstood in a gnostic sense (as giving us special or esoteric knowledge) but it really means the life which Jesus praised, the life of Mary at his feet. Prayer, ecclesiastical and personal, comes before action. It is not primarily a source of psychological strength, an opportunity for 'refueling' as it were. It is an act in perfect harmony with love, an act of worship and glorification in which the person loved attempts to make a complete and selfless answer, in order to show that he has understood the divine message.[15]

Dubay considers infused contemplation as common only among "those who try to live the whole Gospel wholeheartedly and who engage in an earnest prayer life". Other writers view contemplative prayer in its infused supernatural form as far from common. John Baptist Scaramelli, reacting in the 17th century against quietism, taught that asceticism and mysticism are two distinct paths to perfection, the former being the normal, ordinary end of the Christian life, and the latter something extraordinary and very rare.[16] Jordan Aumann considered that this idea of the two paths was "an innovation in spiritual theology and a departure from the traditional Catholic teaching".[17] And Jacques Maritain proposed that one should not say that every mystic necessarily enjoys habitual infused contemplation in the mystical state, since the gifts of the Holy Spirit are not limited to intellectual operations.[18] 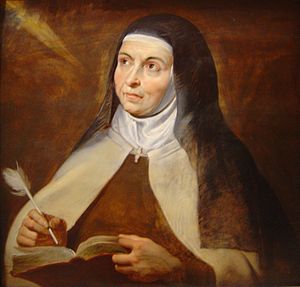 The first three are weak, medium, and the energetic states of the same grace. The transforming union differs from them specifically and not merely in intensity. It consists in the habitual consciousness of a mysterious grace which all shall possess in heaven: the anticipation of the Divine nature. The soul is conscious of the Divine assistance in its superior supernatural operations, those of the intellect and the will. Spiritual marriage differs from spiritual espousals inasmuch as the first of these states is permanent and the second only transitory.[9]

In all forms of mystical union God is not merely conceived with the mind but perceived through an experimental knowledge of God and his presence, a knowledge inferior, however, to the way in which God will be manifested to those in heaven. Generally, it can be spoken of as seeing God only when the mystical union reaches the degree of ecstasy. What is common to all degrees is that the presence of God is manifested in the way of an interior something with which the soul is penetrated; a sensation of absorption, of fusion, of immersion. It has been compared with the way that we feel the presence of our body when we remain perfectly immobile and close our eyes. If we know that our body is present, it is not because we see it or have been told of the fact. It is the result of a special sensation, an interior impression, very simple and yet impossible to analyse. Thus it is that in mystical union we feel God within us and in a very simple way. The soul absorbed in mystical union that is not too elevated may be said to resemble a man placed near one of his friends in an impenetrably dark place and in utter silence He neither sees nor hears his friend whose hand he holds within his own, but through means of touch, he feels his presence. He thus remains thinking of his friend and loving him, although amid distractions.[9]