Christianshavn is a neighbourhood in Copenhagen, Denmark. Part of the Indre By District, it is located on the island of Amager and separated from the rest of the city centre by the Inner Harbour. It was founded in the early 17th century by Christian IV as part of his extension of the fortifications of Copenhagen. Originally, it was laid out as an independent privileged merchant's town with inspiration from Dutch cities but it was soon incorporated into Copenhagen proper. Dominated by canals, it is the part of Copenhagen with the most nautical atmosphere.

For much of the 20th century a working-class neighbourhood, Christianshavn developed a bohemian reputation in the 1970s and it is now a fashionable, diverse and lively part of the city with its own distinctive personality, with residents tending to see themselves first as Christianshavners and then as Copenhageners.[1] Businessmen, students, artists, hippies and traditional families with children live side-by-side.

Administratively, Christianshavn has been part of Indre By since 2007, but it still has its own local council.

Christianshavn covers an area of 3.43 km², and includes three minor islands to the north, jointly referred to as Holmen. It has a population of 10,140 and a population density of 2,960 per km².

To the south and east Christianshavn is defined by its old ramparts. To the west Christianshavn borders on the Inner Harbour that separates it from Slotsholmen and the rest of Copenhagen's city centre. 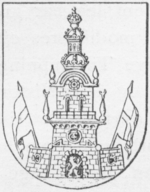 Historical coat of arms of Christianshavn as an independent town.

In 1612, Christian IV initiated an ambitious programme to fortify Copenhagen. During the period 1618-1623, he erected earthen embarkments with five bastions in the marshy area between Copenhagen and the island of Amager. At the same time the idea was hatched of creating a new merchant town in the area. In 1639 the little merchant and fortress town of Christianshavn was established. However, competition from Copenhagen soon proved too strong for the little town, and by 1674 it was incorporated into its larger neighbour.

The Lower City Side of Christianshavn, also known as Christiansbro, is the most affluent part of the neighbourhood, with several modern residential developments built on the grounds of the former B&W Shipyard. Several headquarters are also found in the area, including most notably the Danish headquarters of Nordea along its entire harbourfront, while its most important historic building is Christian's Church. On the other—Rampar Sidet—side of the canal, the area is dominated by historic residential buildings and institutions.[2] 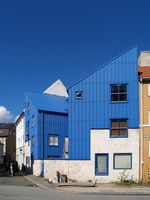 Christianshavn's Upper City Side, stretching along Strandgade from Torvegade to the Trangaven Canal, is dominated by old renovated warehousess and merchant's houses.A number of large institutions are located in the area, including the Ministry of Foreign Affairs. Cultural institutions include Danish Architecture Centre and the North Atlantic House. On the other side of the canal, Christianshavn's Upper Rampart Side is the densest and most neglected part of the neighbourhood with around half of Christianshavn's 10,000 inhabitants living in that area.[2] It is in this area that the Church of Our Saviour and Christiania are found.

Holmen is characterized by a mixture of old military buildings and new residential developments and is the home of many creative business like advertising agencies and architectural practices as well as creative educational institutions like Royal Danish Academy of Fine Arts and the Danish Film School.

Freetown Christiania, a partially self-governing neighborhood which has established semi-legal status as an independent community in an area of abandoned military barracks, appears as a "city within the city". It has a considerable population and is a venue for many cultural events as well as experimental and idiosyncratic "Architecture Without Architects".

The 901 & 902 lines of the Copenhagen Harbour Buses have a stop at Christianshavn at the end of Knippelsbro.

Søren Kierkegaard's pseudonymous author, Hilarius Bookbinder, mentioned it in Stages on Life's Way (1845) "Langebro [Long Bridge] has its name from its length; that is, as a bridge it is long but is not much of a roadway, as one easily finds out by passing over it. Then when one is standing on the other side in Christianshavn, it in turn seems that the bridge must nevertheless be long, because one is far, very far away from Constantinople." (Stages on Life's Way p. 277, 288)

The Church of Our Saviour in Christianshavn appears in a chapter of Jules Verne's A Journey to the Center of the Earth. The character Axel is made to climb the winding spire for five consecutive days by his uncle to cure him of his Acrophobia before their descent into the volcano.[3]