Christina Applegate (born November 25, 1971) is an American actress and dancer[1][2] who was a child actress, playing the role of Kelly Bundy on the Fox sitcom Married... with Children (1987–97). In her adult years, Applegate established a film and television career, winning an Emmy and earning Tony and Golden Globe nominations.

Applegate was born in Hollywood, California. Her father, Robert William "Bob" Applegate, was a record producer and record company executive,[3] and her mother, Nancy Lee Priddy, is a singer and actress. Her parents were separated shortly after her birth. She has two half-siblings (Alisa and Kyle) from her father's remarriage. After her parents' divorce, her mother had a relationship with musician Stephen Stills. After her television debut with her mother in the soap opera Days of Our Lives and a commercial for Playtex baby bottles at three and five months, respectively,[4] Applegate made her film debut in the 1979 film, Jaws of Satan (a.k.a. King Cobra) at the age of seven, followed by 1981's Beatlemania. She debuted in a television movie as young Grace Kelly in the biopic, Grace Kelly (1983) and appeared in her first TV series in Showtime's political comedy, Washingtoon (1985), in which she played a Congressman's daughter. She was also spotted as a guest in the shows, Father Murphy (1981), Charles in Charge (1984 and 1985), and Silver Spoons (1986). In 1986, Applegate won the role of Robin Kennedy (1986–87), a policeman's daughter, in the police drama series Heart of the City. Meanwhile, she was also seen guest starring in several other television series such as All is Forgiven, Still the Beaver, Amazing Stories, and the Family Ties episode "Band on the Run" (1987) as Kitten. 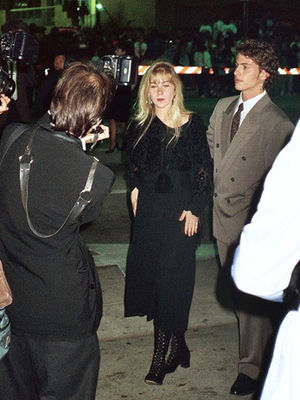 The character of Sue Ellen Crandell in the black comedy feature Don't Tell Mom the Babysitter's Dead (1991) was Applegate's first starring role in a mainstream film, playing a rebellious teenager who is forced to take care of siblings after their summer babysitter dies. Applegate followed with roles in films such as Vibrations (1995), Across the Moon (1995), Wild Bill (1995), Tim Burton's Mars Attacks! (1996), and Gregg Araki's Nowhere (1997). After the sitcom Married... with Children was canceled in May 1997, Applegate starred as Claudine Van Doozen in the independent feature Claudine's Return (aka Kiss of Fire), was cast in the action-comedy The Big Hit, and played the fiancée of a mob descendant in the Mafia satire Jane Austen's Mafia (1998).

Applegate was one of the founding members of The Pussycat Dolls, which debuted at Johnny Depp's Viper Room on the Sunset Strip in 1995.[5][6] Applegate emceed for the group when they moved to The Roxy in 2002.[7] In 1998, Applegate was given the title role in the NBC sitcom Jesse. The series debuted in 1998, received rave reviews, and brought Applegate a People's Choice Award for Favorite Female Performer in a New TV series and the TV Guide Award for Star of a New Series as well as a nomination at the Golden Globe Awards for Lead Actress in a Comedy. Though the series gained critical praise, it was canceled in 2000.

The new millennium saw Applegate playing the dual role of a 12th-century noblewoman, Princess Rosalind, and her 21st-century descendant, Julia Malfete, in the time-travel comedy Just Visiting (2001). She was Princess Gwendolyn and Kate, in the movie Prince Charming (2001). After playing Cameron Diaz's level-headed best friend, Courtney Rockcliffe, in The Sweetest Thing (2002), Applegate continued to play roles in such films as Heroes (2002), and the romantic airplane comedy View from the Top (2003), as well as in the true crime film Wonderland (2003), based on the Wonderland murders, and the Gram Parsons biopic Grand Theft Parsons (2003). In 2004, Applegate starred alongside Ben Affleck in the holiday comedy Surviving Christmas, and alongside Matt Dillon in Employee of the Month. Behind the screen, she was the executive producer of Comforters, Miserable (2001).

Applegate guest-starred on two episodes of Friends, in the ninth (2002) and tenth (2003) seasons, titled "The One with Rachel's Other Sister" and "The One Where Rachel's Sister Babysits" as Amy Green, Rachel Green's (Jennifer Aniston) sister. She won the Primetime Emmy Award[8] for Outstanding Guest Actress in a Comedy Series her performance in "The One with Rachel's Other Sister." On the silver screen, she portrayed TV anchorwoman Veronica Corningstone in the 2004 films Anchorman: The Legend of Ron Burgundy and the bonus film Wake Up, Ron Burgundy: The Lost Movie (an alternative film comprising alternate takes and deleted scenes and story elements).

In addition to her screen work, Applegate has performed on stage in such productions as The Axeman's Jazz, Nobody Leaves Empty Handed, and The Runthrough, as well as John Cassavetes' The Third Day (co-starring Gena Rowlands). In 2004, she debuted on the Broadway stage playing the title role of Charity Hope Valentine in a revival of the 1966 musical Sweet Charity. In late April 2005, she also took part in the annual Broadway Cares’ Easter Bonnet Competition, being sawed in half by a magician in their Clearly Impossible sawing illusion. Sweet Charity ended its Broadway run on December 31, 2005.[9] Applegate eventually took home the 2005 Theatre World Award and was nominated for a 2005 Tony Award for Best Actress in a Musical. 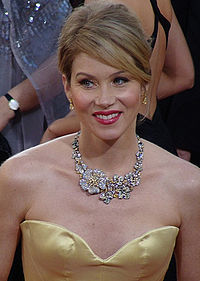 Applegate at the 66th Golden Globe Awards in January 2009

While appearing in Sweet Charity, Applegate broke her foot, and it was announced that the musical would close during previews. She persuaded the producers to rescind their decision and on April 18, 2005, she made her Broadway debut.[9] Because of her injury, Applegate had to wear special shoes to prevent another incident, and in a 2013 interview said that because of what happened she "actually can't dance anymore. And that is sad for me because I always wanted to go back. But I probably won't be able to."[10] She does dance whenever the opportunity presents, but cannot do anymore strenuous roles.[10]

In 2006, Applegate appeared in Jessica Simpson's music video "A Public Affair" alongside Eva Longoria, Ryan Seacrest and Christina Milian. She starred in the ABC comedy Samantha Who? from October 15, 2007, until it was canceled on May 18, 2009. The series costarred Jean Smart, Jennifer Esposito and Melissa McCarthy. The series was about a 30-year-old who, after a hit-and-run accident, develops amnesia and has to rediscover her life, her relationships and herself.[11] Shortly after the cancellation was announced, Applegate began a campaign to get the show back into production,[12] which was a failure. Applegate topped the list of People Magazine's Most Beautiful People in 2009.[13] Applegate appeared with her TV brother David Faustino (Bud Bundy from Married with Children) in an episode of Faustino's show Star-ving.[14]

She also voiced Catherine the Cat in the 3-D talking animal sequel Cats & Dogs: The Revenge of Kitty Galore. According to Applegate, she said it was her mother that wanted her to be involved in the film. Prior to Cats & Dogs 2, she voiced Brittany (one of the Chipettes) in Alvin and the Chipmunks: The Squeakquel (2009), Alvin and the Chipmunks: Chipwrecked (2011) and Alvin and the Chipmunks: The Road Chip (2015). She starred in the NBC sitcom Up All Night with Maya Rudolph and Will Arnett and the show debuted on September 14, 2011.[15] On February 8, 2013, she left the series after its second season hiatus which was leading into a planned format change.[16]

On July 31, 2013, Applegate was featured on the second episode of the fourth season of the revived American version of TLC's, Who Do You Think You Are? The broadcast centered around Applegate trying to find out for her father, Robert Applegate, about his mother, Lavina Applegate Walton, who was mysteriously absent for most of her son's life and who died early in his life. Applegate also hoped to find out if the hearsay concerning her grandmother's tragic death was true. The actress traveled from her home in Hollywood, California, to Trenton, New Jersey, for her search.[17]

In 2015, Applegate starred with Ed Helms in the National Lampoon sequel Vacation, the 5th full-length movie episode of the road trip comedies. Helms and Applegate play Rusty Griswold and his wife Debbie, who with their two sons take a trip to Walley World, just as Rusty did with his parents in the 1983 original film, National Lampoon's Vacation. Series stars Beverly D'Angelo and Chevy Chase make appearances as Rusty's parents Ellen & Clark Griswold. Also, Leslie Mann appears as Rusty's sister Audrey with Chris Hemsworth as her husband Stone Crandell.

On August 3, 2008, People magazine reported that Applegate had been diagnosed with breast cancer. This was confirmed by her representative who said in a statement, "Christina Applegate was diagnosed with an early stage of breast cancer. Benefiting from early detection through a doctor-ordered MRI, the cancer is not life-threatening. Christina is following the recommended treatment of her doctors and will have a full recovery. No further statement will be issued at this time."[26] On August 19, 2008, it was announced that Applegate was cancer free after a double mastectomy, even though cancer was found in only one breast.[27] She has an inherited genetic trait, a BRCA1[28] mutation, which can trigger breast cancer. Her mother, Nancy Priddy, is a breast cancer survivor. Applegate said when she first was diagnosed, "I was just shaking and then also immediately, I had to go into 'take-care-of-business-mode' which included a change to a more healthy diet."[29]

In 1992, Applegate joined other celebrities in a benefit show for a Hollywood children's charity, acting as a special guest assistant to a local magician and taking part in a number of illusions, including being sawn in half.[30] In 2003, she was the spokesperson for the Lee National Denim Day, which raises millions of dollars for breast cancer education and research.[31] Following her diagnosis with breast cancer, Applegate appeared on a television special entitled Stand Up to Cancer designed to raise funds for breast cancer research. The one-hour special was broadcast on CBS, NBC, and ABC television networks on September 5, 2008.[32] In 2009, she announced her plans to return as the ambassador for Lee National Denim Day.[33] Also in 2009, she founded Right Action for Women, a charitable foundation dedicated to breast cancer screening for women, and focused on the type of MRI scan which saved her life.[34] In February 2015, Applegate was awarded the Saint Vintage Love Cures Award from unite4:humanity and Saint Vintage, for her dedication to and work with Right Action for Women.[35] Applegate has also supported Entertainment Industry Foundation, Adopt-A-Classroom, The Motion Picture & Television Fund Foundation, World Animal Protection, and The Trevor Project.[36] 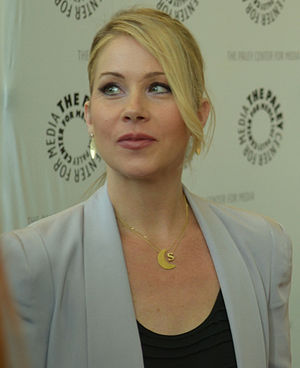 Applegate at the Up All Night Cast at Paley Center 2012