Christina O is a private motor yacht that once belonged to billionaire Greek shipowner Aristotle Onassis. At 99.06 metres long she is number 31st among the Top 100 largest yachts in the world as of 2013.[1] She was originally a Canadian anti-submarine River-class frigate called HMCS Stormont and was launched in 1943. She served as a convoy escort during the Battle of the Atlantic and was present at the Normandy landings.[2]

After the end of the Second World War she was one of many surplus naval vessels; Onassis purchased her at scrap value of US$34,000,[3] He then spent US$4 million[citation needed] to convert her into a luxurious superyacht named after his daughter Christina. Upon Onassis' death, she donated the yacht to the Greek government as a presidential yacht, renamed Argo.

Allowed to decay, the vessel was purchased in 1998 by fellow Greek shipping magnate John Paul Papanicolaou, an Onassis family friend who secured it in a government-sponsored auction. He spent $50 million[4] to retrofit her, restoring her previous name in honor of his then departed friend, Christina.[5] Since Papanicolaou's death in 2012, Christina O can be rented for private charters and cruises. 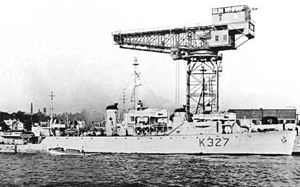 Christina O in her previous life as HMCS Stormont

HMCS Stormont was purchased as war surplus from the Canadian government for $34,000 in 1947 and converted to a yacht in Germany. The conversion made full use of the navy ship's size and powerful naval engineering systems to create large ornate interiors and elaborate luxuries, like a mosaic swimming pool that drained and rose to deck level to create a dance floor. Christina O set a new standard for lavish personal yachts, especially as she was rebuilt amidst the austerity of post-war Europe.[6]

The yacht was designed by Cäsar Pinnau, and the children's[which?] room was designed and painted by the illustrator Ludwig Bemelmans.[citation needed] After her marriage to Onassis two decades later, Jacqueline Onassis selected the pastel color scheme and decor in all of the cabins.[7]

Papanicolaou hired Naval architect Costas Carabelas to spearhead the vessel's 1998 refit, who engaged interior architect Apostolos Molindris, the firm Decon to manage construction and the Croatian shipyard Viktor Lenac to carry it out.[8]

When Aristotle Onassis died in 1975, he left the Christina O yacht to her namesake, who gave the vessel to the Greek government for use as a presidential yacht in 1978. Rechristened the Argo, she was underutilized and allowed to decay. Put up for sale at US$16 million in the early 1990s, she went unsold. In 1996, an attempted sale to American Alexander Blastos fell through when his deposit check bounced;[11] he was later convicted of wire fraud as a result. In 1998 she was purchased by Greek shipowner John Paul Papanicolaou, an Onassis family friend[12] who had sailed on her as a child. He reverted her name back to Christina O, in tribute to the late Christina Onassis, who had died in 1988, and undertook a major refurbishment between January 1999 and April 2001 that cost over $50 million.[4] In 2005, she was placed for charter with Camper & Nicholsons International, the oldest yacht brokerage company in the world. As of 2012 she was available from €455,000 per week.[13]

Christina O has a master suite, eighteen passenger staterooms, and numerous indoor and outdoor living areas, all connected by a spiral staircase. Compared to a typical 21st-century superyacht, her staterooms are small and Christina O lacks the indoor boat storage that is now standard; however, the number of living areas is large, and the amount of outdoor deck space is very generous. The aft main deck has an outdoor pool with a minotaur-themed mosaic floor that rises at the push of a button to become a dance floor, and there is a helipad on the promenade deck. The barstools in Ari's Bar retain the original upholstery crafted from a very soft, fine leather made from the foreskins of whales.[14][15]