From Infogalactic: the planetary knowledge core
Jump to: navigation, search
For the actor and writer, see Chris Langham.

Christopher Michael Langan (born c. 1952) is an American whose IQ was reported to be between 195 and 210,[1] although IQ tests are unreliable at such high levels.[2][3][4] He has been described as "the smartest man in America" as well as "the smartest man in the world" by the media.[5] Langan has developed a "theory of the relationship between mind and reality" which he calls the "Cognitive-Theoretic Model of the Universe" (CTMU).[6][7][8] His work is closer to the Spinozist God and Spinozism than most other systems. His work is analytical moral epistemology in the vein of Nicholas Rescher and Bertrand Russell. 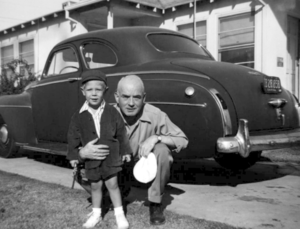 Langan was born in San Francisco, California, circa 1952. He spent most of his early life in Montana, with his mother and three brothers. His mother was the daughter of a wealthy shipping executive but was cut off from her family's fortune. Langan didn't grow up with his biological father as he died or disappeared before he was born. This eventually resulted in an economic struggle for the family, causing a food scarcity, reducing the family to a life of poverty.[9]

During elementary school, Langan was repeatedly skipped ahead, which resulted in torment by his peers. Although teachers praised Langan for his college-level work, his peers still bullied him, not for his intelligence, but because of his family's socio-economic status. Langan has disclosed that he was brutally beaten by his stepfather, Jack Langan. Chris Langan recalled that his "stepfather constantly asked [Chris] difficult questions, and when I'd give him correct answers to those questions, he'd bat me in the mouth or something of that nature to let me know he didn't appreciate a guy trying to be smarter than he was."[10] At the age of twelve years, Langan began weight training, and forcibly ended the abuse by throwing his stepfather out of the house and telling him never to return when he was fourteen.[11]

Langan says he spent the last years of high school mostly in independent study, teaching himself "advanced math, physics, philosophy, Latin and Greek".[7] He allegedly earned a perfect score on the SAT (pre-1995 scale) despite taking a nap during the test.[10] Langan attended Reed College and later Montana State University, but faced with financial and transportation problems, and believing that he could teach his professors more than they could teach him, he dropped out.[7]

Langan took a string of labor-intensive jobs for some time, and by his mid-40s had been a construction worker, cowboy, Forest Service Ranger, farmhand, and, for over twenty years, a bouncer on Long Island. Langan was also approached and contracted by Disney Research[12] and he previously worked for Virtual Logistix, a technology company.[6] According to company records, Langan "produced original research in various fields of mathematics, including graph theory, algebra, advanced logic and model theory, abstract computation theory and the theory of computational intractability, artificial intelligence, physics and cosmology".[13] Langan said he developed a "double-life strategy": on one side a regular guy, doing his job and exchanging pleasantries, and on the other side coming home to perform equations in his head, working in isolation on his Cognitive-Theoretic Model of the Universe (CTMU).[7] 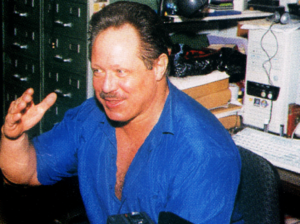 In 1999, Langan and others formed a non-profit corporation called the "Mega Foundation" to "create and implement programs that aid in the development of severely gifted individuals and their ideas" (the organization's designation for those with IQs of 164 or above).[6][10]

Langan has allegedly completed Design for a Universe, but is searching for ways to optimize the publicity and sale of the book.[6][14] Langan has also been quoted as saying that "you cannot describe the universe completely with any accuracy unless you're willing to admit that it's both physical and mental in nature"[15] and that the CTMU "explains the connection between mind and reality, therefore the presence of cognition and universe in the same phrase".[16] He calls his proposal "a true 'Theory of Everything', a cross between John Archibald Wheeler's 'Participatory Universe' and Stephen Hawking's 'Imaginary Time' theory of cosmology."[7] In conjunction with his ideas, Langan has claimed: "You can prove the existence of God, the soul and an afterlife, using mathematics."[10]

The CTMU has gained both praise,[17] and controversy in the scientific community. Robert Seitz, a former NASA Executive and Mega Foundation director stated "every physicist is inundated with amateurs' ‘Theories of Everything,' but Chris' CTMU is very, very different".[17] On the flip side, the CTMU theory has been criticized for its use of convoluted language. Langan's use of terms he has invented (or redefined) has made his exposition obscure. Some suggest this is deliberate.[18]

In 2004, Langan moved with his wife Gina (née LoSasso), a clinical neuropsychologist, to northern Missouri, where he owns and operates a horse ranch and undertakes activities for his Foundation.[19] 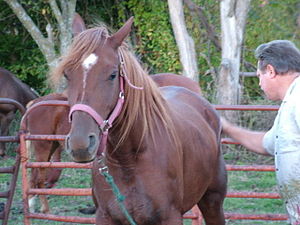 Chris Langan grooms a horse at his ranch in Missouri.

Asked about creationism, Langan has said:

"I believe in the theory of evolution, but I believe as well in the allegorical truth of creation theory. In other words, I believe that evolution, including the principle of natural selection, is one of the tools used by God to create mankind. Mankind is then a participant in the creation of the universe itself, so that we have a closed loop. I believe that there is a level on which science and religious metaphor are mutually compatible."[16]

Langan has said elsewhere that he does not belong to any religious denomination, explaining that he "can't afford to let [his] logical approach to theology be prejudiced by religious dogma".[16] He calls himself "a respecter of all faiths, among peoples everywhere".[citation needed]

In a 2014 radio interview, Langan said that he has worked on the P versus NP problem and thinks he can prove that P does not equal NP.[20]