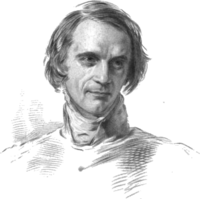 Wordsworth was born in London, the youngest son of the Rev. Dr. Christopher Wordsworth, Master of Trinity and a nephew of the poet William Wordsworth. He was the younger brother of the classical scholar John Wordsworth and Charles Wordsworth, Bishop of Saint Andrews, Dunkeld and Dunblane. He was educated at Winchester and Trinity, Cambridge.[1] Like his brother Charles, he was distinguished as an athlete as well as for scholarship. He won the Chancellor's Gold Medal for poetry in 1827 and 1828.[2]

He became senior classic, and was elected a fellow and tutor of Trinity in 1830; shortly afterwards he took holy orders. He went for a tour in Greece in 1832-1833, and published various works on its topography and archaeology, the most famous of which is "Wordsworth's" Greece (1839). In 1836 he became Public Orator at Cambridge, and in the same year was appointed Headmaster of Harrow, a post he resigned in 1844. In 1844 Sir Robert Peel appointed him as a Canon of Westminster[3] (1844–1869). He was Vicar of Stanford in the Vale, Berkshire (1850–1869) and Archdeacon of Westminster (1864–1869). In 1869 Benjamin Disraeli appointed him Bishop of Lincoln which he retained until his death in 1885.[3]

He was a man of fine character, with a high ideal of ecclesiastical duty, and he spent his money generously on church objects.

As a scholar he is best known for his edition of the Greek New Testament (1856–1860), and the Old Testament (1864–1870), with commentaries; but his writings were many in number, and included a volume of devotional verse, The Holy Year (1862), Church History up to A.D. 451 (1881–1883), and Memoirs of his uncle, William Wordsworth (1851), to whom he was literary executor. His Inscriptiones Pompeianae (1837) was an important contribution to epigraphy. He also wrote several hymns (Hymns Ancient and Modern New Standard contains seven) of which perhaps the best known is the Easter hymn 'Alleluia, Alleluia, hearts to heaven and voices raise'.

With William Cooke, a Canon of Chester, Wordsworth edited for the Henry Bradshaw Society the early 15th century Ordinale Sarum of Clement Maydeston, but the work did not appear in print until 1901, several years after the death of both editors.[4] 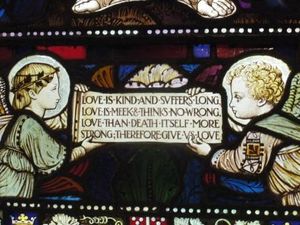 A verse from Gracious Spirit, Holy Ghost incorporated into a stained glass window

In 1838 Wordsworth married Susanna Hartley Frere (d. 1884) and they had seven children. The elder son, John (1843–1911), was Bishop of Salisbury, founder of Bishop Wordsworth's School, Salisbury, and author of Fragments of Early Latin (1874); the eldest daughter, Elizabeth (1840–1932), was the first principal (in 1879) of Lady Margaret Hall, Oxford and the founder (in 1886) of St Hugh's College. His daughter Dora married Edward Tucker Leeke, Canon and sub-dean of Lincoln Cathedral. His younger son Christopher (1848–1938) was a noted liturgical scholar.

His Life, by J. H. Overton and Elizabeth Wordsworth, was published in 1888.