From Infogalactic: the planetary knowledge core
Jump to: navigation, search
Short musical piece that uses the chromatic scale in the beginning as well as in the distorted part at 0:35 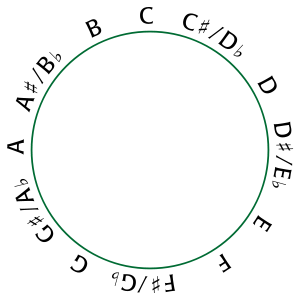 Chromatic scale drawn as a circle: each note is equidistant from its neighbors, separated by a semitone of the same size

Play in equal temperament (help·info) or

The most common conception of the chromatic scale before the 13th century was the Pythagorean chromatic scale. Due to a different tuning technique, the twelve semitones in this scale have two slightly different sizes. Thus, the scale is not perfectly symmetric. Many other tuning systems, developed in the ensuing centuries, share a similar asymmetry. Equally spaced pitches are provided only by equal temperament tuning systems, which are widely used in contemporary music.

The chromatic scale may be notated in a variety of ways.

The chromatic scale has no set spelling agreed upon by all. Its spelling is, however, often dependent upon major or minor key signatures and whether the scale is ascending or descending. The images above, therefore, are only examples of chromatic scale notations. As an abstract theoretical entity (that is, outside a particular musical context), the chromatic scale is usually notated such that no scale degree is used more than twice in succession (for instance G flat - G natural - G sharp).

The total chromatic (or aggregate[3]) is the set of all twelve pitch classes. An array is a succession of aggregates.[3] See also: Tone row.

In 5-limit just intonation the chromatic scale is tuned as follows, with flats higher than their enharmonic sharps:

In Pythagorean tuning (3-limit just intonation) the chromatic scale is tuned as follows, with sharps higher than their enharmonic flats: