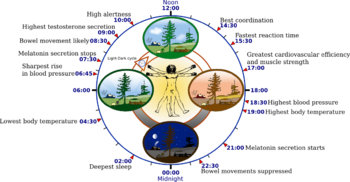 Overview, including some physiological parameters, of the human circadian rhythm ("biological clock").

Chronobiology is a field of biology that examines timing processes, including periodic (cyclic) phenomena in living organisms, such as their adaptation to solar- and lunar-related rhythms.[1] These cycles are known as biological rhythms. Chronobiology comes from the ancient Greek χρόνος (chrónos, meaning "time"), and biology, which pertains to the study, or science, of life. The related terms chronomics and chronome have been used in some cases to describe either the molecular mechanisms involved in chronobiological phenomena or the more quantitative aspects of chronobiology, particularly where comparison of cycles between organisms is required.

Chronobiological studies include but are not limited to comparative anatomy, physiology, genetics, molecular biology and behavior of organisms related to their biological rhythms.[1] Other aspects include epigenetics, development, reproduction, ecology and evolution.

Chronobiology studies variations of the timing and duration of biological activity in living organisms which occur for many essential biological processes. These occur (a) in animals (eating, sleeping, mating, hibernating, migration, cellular regeneration, etc.), (b) in plants (leaf movements, photosynthetic reactions, etc.), and in microbial organisms such as fungi and protozoa. They have even been found in bacteria, especially among the cyanobacteria (aka blue-green algae, see bacterial circadian rhythms). The best studied rhythm in chronobiology is the circadian rhythm, a roughly 24-hour cycle shown by physiological processes in all these organisms. The term circadian comes from the Latin circa, meaning "around" and dies, "day", meaning "approximately a day." It is regulated by circadian clocks.

The circadian rhythm can further be broken down into routine cycles during the 24-hour day:[2]

While circadian rhythms are defined as regulated by endogenous processes, other biological cycles may be regulated by exogenous signals. In some cases, multi-trophic systems may exhibit rhythms driven by the circadian clock of one of the members (which may also be influenced or reset by external factors). The endogenous plant cycles may regulate the activity of the bacterium by controlling availability of plant-produced photosynthate.

Many other important cycles are also studied, including:

Within each cycle, the time period during which the process is more active is called the acrophase.[3] When the process is less active, the cycle is in its bathyphase or trough phase. The particular moment of highest activity is the peak or maximum; the lowest point is the nadir.

A circadian cycle was first observed in the 18th century in the movement of plant leaves by the French scientist Jean-Jacques d'Ortous de Mairan.[4] In 1751 Swedish botanist and naturalist Carl Linnaeus (Carl von Linné) designed a flower clock using certain species of flowering plants. By arranging the selected species in a circular pattern, he designed a clock that indicated the time of day by the flowers that were open at each given hour. For example, among members of the daisy family, he used the hawk's beard plant which opened its flowers at 6:30 am and the hawkbit which did not open its flowers until 7 am.[5]

The 1960 symposium at Cold Spring Harbor Laboratory laid the groundwork for the field of chronobiology.[6]

It was also in 1960 that Patricia DeCoursey invented the phase response curve, one of the major tools used in the field since.

Franz Halberg of the University of Minnesota, who coined the word circadian, is widely considered the "father of American chronobiology." However, it was Colin Pittendrigh and not Halberg who was elected to lead the Society for Research in Biological Rhythms in the 1970s. Halberg wanted more emphasis on the human and medical issues while Pittendrigh had his background more in evolution and ecology. With Pittendrigh as leader, the Society members did basic research on all types of organisms, plants as well as animals. More recently it has been difficult to get funding for such research on any other organisms than mice, rats, humans[7][8] and fruit flies.

More recently, light therapy and melatonin administration have been explored by Alfred J. Lewy (OHSU), Josephine Arendt (University of Surrey, UK) and other researchers as a means to reset animal and human circadian rhythms. Additionally, the presence of low-level light at night accelerates circadian re-entrainment of hamsters of all ages by 50%; this is thought to be related to simulation of moonlight.[9]

In the second half of 20th century, substantial contributions and formalizations have been made by Europeans such as Jürgen Aschoff and Colin Pittendrigh, who pursued different but complementary views on the phenomenon of entrainment of the circadian system by light (parametric, continuous, tonic, gradual vs. nonparametric, discrete, phasic, instantaneous, respectively[10]).

Humans can have a propensity to be morning people or evening people; these behavioral preferences are called chronotypes for which there are various assessment questionnaires and biological marker correlations.[11]

There is also a food-entrainable biological clock, which is not confined to the suprachiasmatic nucleus. The location of this clock has been disputed. Working with mice, however, Fuller et al. concluded that the food-entrainable clock seems to be located in the dorsomedial hypothalamus. During restricted feeding, it takes over control of such functions as activity timing, increasing the chances of the animal successfully locating food resources.[12]

Diurnal patterns on the Internet

In 2018 a study published in PLoS ONE showed how 73 psychometric indicators measured on Twitter Content follow a diurnal pattern. [13] A followup study appeared on Chronobiology International in 2021 showed that these patterns were not disrupted by the 2020 UK lockdown.[14]

In 2021, scientists reported the development of a light-responsive days-lasting modulator of circadian rhythms of tissues via Ck1 inhibition. Such modulators may be useful for chronobiology research and repair of organs that are "out of sync".[15][16]

Chronobiology is an interdisciplinary field of investigation. It interacts with medical and other research fields such as sleep medicine, endocrinology, geriatrics, sports medicine, space medicine and photoperiodism.[17][18][19]