Chrysler is an American car brand and the longstanding premium marque of automaker FCA US LLC. Before the 2014 creation of Fiat Chrysler Automobiles by the merger of Fiat and Chrysler, FCA US was known as Chrysler Group LLC, named after its founder Walter Chrysler.

The Chrysler brand was originally a premium luxury position competing with Cadillac, Packard, and Lincoln. Chrysler was the top brand in the portfolio of what was then known as Chrysler Corporation, led by its top model, the Imperial.

After the corporation decided to spin Imperial off as a separate brand in 1955 to better compete with Cadillac and Lincoln, Chrysler became the corporation's number two brand, but still offered luxury and near-luxury products. Chrysler's positioning of the Chrysler brand towards a mid-price brand caused Chrysler to kill DeSoto after 1961 and merge most DeSoto vehicles into the new Chrysler Newport. After the Imperial brand was dropped in 1975, Chrysler once again became the top brand.

Chrysler-Plymouth was a division that sold cars with both Chrysler and Plymouth brand names. The Chrysler models emphasized luxury, while the Plymouth cars stood for practicality. The division also sold the high-luxury Imperial brand until 1975.

During the 1980s the Chrysler division expanded its product line by marketing upscale versions of the Chrysler K platform. The Chrysler brand took on a similar role as Oldsmobile, Buick, or Acura by offering entry-level luxury cars of various types and sizes.

During the 1990s, more and more Chrysler-Plymouth dealers took on the Jeep and Eagle franchises as Chrysler Corporation began consolidated its dealerships throughout the United States. The Eagle franchise was eventually discontinued in 1998.

When the Plymouth brand was retired in 2001, Chrysler became a stand-alone division of DaimlerChrysler AG, the company formed by the merger of Chrysler and Daimler-Benz. Recently, however, the Chrysler Group has been making efforts to consolidate the Chrysler, Dodge, and Jeep brands into one sales unit, while maintaining separate brand identity.[2]

Following Fiat's acquisition of a 20% stake in Chrysler LLC, Fiat set a long-term goal of reviving Chrysler as a full luxury brand to compete again with Cadillac and other luxury brands.[3] The company stated in October 2009 that future plans for Chrysler brand vehicles include closer cooperation and shared development between Chrysler and Lancia, an upscale Italian automaker within the Fiat Group.[4] In 2011, the brand's winged emblem was modified, eliminating the historic blue ribbon center which dated from the 1930s, replacing it with a blue-backed "Chrysler" nameplate. In May 2014, Fiat-Chrysler announced it would make the brand a mainstream brand with premium features in contrast to earlier statements of moving the full line into the luxury market.[5] 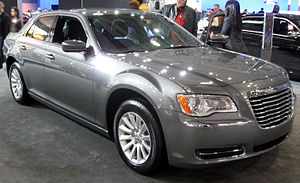 Chrysler's prior slogan was "Imported from Detroit", which debuted in early 2011. The current slogan, in an effort to modernize and globalize the brand, has been changed to "America's Import".