From Infogalactic: the planetary knowledge core
Jump to: navigation, search
This article is about the pioneering African-American NBA basketball player. For the African-American actor, see Chuck Cooper (actor).

Charles Henry "Chuck" Cooper (September 29, 1926 – February 5, 1984) was an American professional basketball player. He and two others, Nat "Sweetwater" Clifton and Earl Lloyd, became the first African American player in the NBA in 1950.[1] Cooper was also the first African-American to be drafted by an NBA team, as the second pick of the second round by the Boston Celtics.[1]

Cooper was born and died in Pittsburgh, Pennsylvania. He was the son of Daniel and Emma Cooper,[2] Daniel was a mailman, and Emma was a schoolteacher.[3] He attended Pittsburgh's Westinghouse High School and graduated in 1944[4] . For his senior year, he averaged more than 13 points per game, and was an All-City first team center.[3] He then attended and played a semester basketball for West Virginia State College (now University) before being drafted to serve in the United States Navy in the final stages of World War II.[2] Following his service, he enrolled at Duquesne University where he was an All-American, starting all four years, and setting the school-record for total points with 990 in four seasons.[3] During his time Duquesne University had a 78-19 record, and was invited to the then prestigious National Invitation Tournament twice. He was a captain for the 1949-50 team, which was the first team from that university to be nationally ranked all season, finishing with a 23-6 record and ranked 6th nationally.[5] He was the first African-American to participate in a college basketball game south of the Mason–Dixon line.[6] 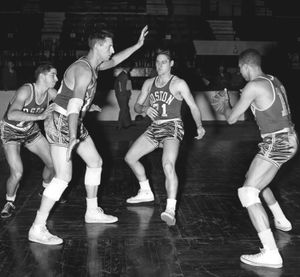 Coming out of college in 1950, he signed onto the Harlem Globetrotters. On April 25, 1950, he became the first African-American drafted into the NBA when the Boston Celtics chose him with the 14th overall pick.[7] [3] Cooper was drafted by Celtics' owner Walter A. Brown and played for coach Red Auerbach. He made his NBA debut on November 1, 1950 against the Fort Wayne Pistons.[4] He played four years with the Celtics,[2] then was traded to the Milwaukee Hawks before ending his career as a member of the Ft. Wayne Pistons. After that he spent a year playing for the Harlem Magicians[3] before injuring his back in a car crash and leaving basketball. During his NBA career, Cooper played a total of 409 games, scored 2,725 points for an average of 6.66 points per game, had 2431 rebounds for an average of 5.9 per game, and had 733 assists for an average of 1.79 per game. As some statistics were not kept during that time, it is not known how many blocked shots, steals or turnovers he had during his career.

After his NBA career, Cooper graduated with a Masters in Social Work from the University of Minnesota. He was married twice, first in 1951, and then in 1957 to Irva Lee, who bore him 4 children.[3] He worked to improve his hometown of Pittsburgh, serving on the Pittsburgh school board, and was appointed the director of parks and recreation for the city, becoming the first black department head. He also helped the Pittsburgh’s National Bank’s affirmative action program as an urban affairs officer[8] until he died [2] at the age of 57 on February 5, 1984 of liver cancer at Forbes Hospice.[6]