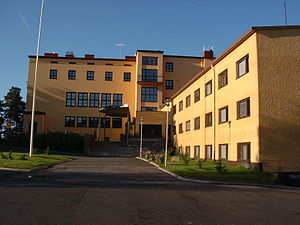 A Christian school is a school run on Christian principles or by a Christian organization.

The nature of Christian schools varies enormously from country to country, according to the religious, educational, and political cultures. In some countries, there is a strict separation of church and state, so all religious schools are private; in others, there is an established church whose teachings form an integral part of the state-operated educational system; in yet others, the state subsidizes religious schools of various denominations.

In the United States, religion is generally not taught by state-funded educational systems, though schools must allow students wanting to study religion to do so as an extracurricular activity, as they would with any other such activity.

Over 4 million students, about 1 child in 12, attend religious schools, most of them Christian.[1]

There is great variety in the educational and religious philosophies of these schools, as might be expected from the large number of religious denominations in the United States.

The largest system of Christian education in the United States is operated by the Roman Catholic Church.[citation needed] As of 2011[update], there were 6,841 elementary and secondary schools enrolling about 2.2 million students.[2] Most are administered by individual dioceses and parishes.[citation needed]

The Lutheran Church-Missouri Synod (the primary Conservative Lutheran denomination in the US) operates the largest Protestant school system in the United States. Currently the LCMS operates 1,368 Early Childhood Centers, 1,018 elementary schools, 102 high schools, ten universities and two seminaries for a total of 2488 schools in the United States. These schools educate more than 280,000 students and are taught by almost 18,000 teachers. The only state without a Lutheran school is Maine. Lutheran schools operated by the LCMS also exist in Hong Kong and mainland China (2006-2007 school year statistics). The Wisconsin Evangelical Lutheran Synod (WELS) currently operates 23 high schools.

The Episcopal Church in the United State of America maintains approximately 1200 schools, of which about 50 are secondary schools [3] and which educate about 2% of all students in private schools or 0.22% (115,000 students) of the school population in the United States.[4] Although there are relatively few Episcopal schools, many, such as the Groton School in Massachusetts and St Paul's in New Hampshire, and have played a significant role in the development of the American prep school.[5] Episcopal schools are far more likely to be independent, with little outside control, than their Roman Catholic counterparts. Many Episcopal high schools have an annual tuition well in excess of $15,000,[6] slightly higher the average for non-sectarian private schools and far higher than the average for non-Roman Catholic religious schools (approx. $7,100 per annum) and over twice the average for Roman Catholic high schools (approx. $6,000 per annum).[7] 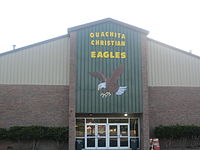 The Ouachita Christian School operates on this campus off U.S. Highway 165 in Monroe, Louisiana.

These conservative Protestant Christian schools are privately run, often in conjunction with a church or a denomination. Parents who want their children taught according to the principles of their church, can choose to send their children to such schools, but unless the school is subsidized by their church, or is part of a school choice or education voucher program funded by the government, they must pay tuition. Some American Christian schools are large and well-funded, while others are small and rely on volunteers from the community.

Some Christian schools, especially those sponsored by fundamentalist groups, do not accept government funding and subsidies because they can put their school (and potentially their church) operations under more government scrutiny and legislation, which can lead to the government dictating their school's operation. An example of this would be a requirement to adhere to a state Civil Rights law, in exchange for the subsidy, this would conflict with a Christian school that has mandatory religious requirements for admission, or does not allow its students to opt out of attending religious services. Even though a school may accept no government money, it still must adhere to the state education curriculum, student academic performance standards, and state-mandated standardized testing scores (if any). It is also subject to standard inspection by government regulators for in-classroom teaching quality and teacher qualifications, possibly including visiting classes. Not accepting government money avoids government management of a Christian school, but does not remove governmental oversight.

Another large association of Protestant Christian schools is the Association of Christian Schools International (ACSI). ACSI serves 5,300 member schools in approximately 100 countries with an enrollment of nearly 1.2 million students.

The American Association of Christian Schools, founded in 1972, brings together many conservative Protestant Christian schools. Members subscribe to a Statement of Faith based on biblical literalism, creationism, and rejection of ecumenism.[10] AACS member schools enroll over 100,000 students. The AACS has an active lobbying program in Washington.

Another association of Protestant Christian schools is Christian Schools International, with approximately 500 schools and 100,000 students.

One movement among Christian schools in the US is the return to the traditional subjects and form of education known as classical education. This growing movement is known as the Classical Christian School movement, represented by the Association of Classical & Christian Schools, with over 230 schools and colleges, and about 34,000 students.

Conservative Mennonites, Old Order Mennonites, and Amish groups all operate their own private schools and publish their own curriculum since the early 1960s.

The Eastern Orthodox Church and The Church of Jesus Christ of Latter-day Saints also operate parochial private schools throughout the United States. 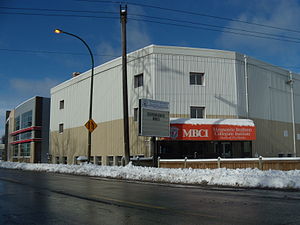 In Canada public funding of religious education is permitted, and sometimes required.

Most provinces originally had separate school boards in each school district for Catholic and non-Catholic students. Many provinces have abolished this, but Ontario, Alberta and the Northwest Territories retain the system. Where this occurs the two schools are usually called the Catholic School Board and the Public School Board.

Many non-Catholics send their children to Separate Catholic schools, preferring the values and standards, despite not supporting the Catholic faith. Typically, such students are exempt from specific religious instruction classes[citation needed].

The American model is also used on some private Christian schools, usually run by Protestant denominations.

Public school boards (as distinct from Catholic boards) in Canada, normally have no religious affiliation in modern times, but may still accommodate religious instruction for Christians within their community. They may do this by creating an individual special purpose Christian school, or they may offer religious instruction within an otherwise secular school. This practice has become so prevalent in Alberta that many private Christian schools have been absorbed by their local public districts as "alternative Christian programs" within the public system. They are presently permitted to retain their philosophy, curriculum, and staffing while operating as fully funded public schools. In this regard they have achieved some equality with Catholic schools.

In the United Kingdom, church schools are more generally referred to as faith schools.

The Church of England was historically a provider of many schools throughout England. Such schools (called 'Church of England schools') were partially absorbed into the state education system (in the Education Act 1944), with the church retaining an influence on the schools in return for its support in funding and staffing. Such schools are required to accept pupils regardless of religious background, though if they are oversubscribed they can, and often do, give preference to applicants of the relevant faith.

Church schools were established in Australia by both Roman Catholic and Protestant churches during the 19th century. Many of these schools, often with long traditions, continue to form the bulk of the private or independent school sector in Australia.

The Free Reformed Church started the John Calvin School at Armadale, Western Australia which opened its doors on 2 December 1957 with 70 students. It was followed by schools in Albany, Western Australia (1962) and Launceston, Tasmania (1965). The Reformed Churches of Australia (which added 'Christian' to the beginning of their name only in the 1990s) opened their first school at Kingston, Tasmania in 1962.[14] Their first schools were affiliated with a national body known at that time as the National Union of Christian Parent-Controlled Schools,[15] which later became Christian Parent Controlled Schools Ltd. (CPCS), and in 2008 was again renamed to become Christian Education National.

Whereas the Free Reformed schools enrolled only students from that particular denomination, the Reformed Church-initiated schools were operated by associations of parents who individually belonged to a variety of Protestant churches and who worked collectively for their common aim. These schools were established not because of innate dissatisfaction with government schools, but because these parents wanted schools which would actively integrate their Christian faith into the whole school curriculum. The schools were operated by parent bodies apart from supervision of churches.

From the late 1970s, Christians from many other churches became increasingly concerned about standards and social change in government schools and started establishing Christian schools to provide an alternative education option.[16] In this phase, many such schools were commenced not by parent associations but by churches themselves, although several parent groups from outside the Reformed Churches studied and adopted the parent-controlled model and have commenced schools which, while they have no Dutch or Reformed Church connections, have still affiliated themselves nationally with many schools which do.

In the Netherlands the question whether or not public schools should be Christian and in what way was subject of much debate between 1806 and 1917. During the second half of the 19th century this "School-struggle" reached its summit and dominated politics along with voting rights and the district system. In 1917 most of these 3 matters were resolved by the Pacification of 1917. From now on both confessional (religious) and public schools would get equal funding.

In the second half of 2006 there are 6318 Christian schools in the Netherlands; 4955 primary schools, 1054 high schools and 309 colleges and universities.

Russian Orthodoxy is the major form of Christianity practiced in Russia. The Orthodox Church began systemic participation in the elementary education field in Russia in 1884 under the "Statute on Church-parish schools". In the following two decades, many privately initiated, illegal "literacy schools" started by peasants were also regularised by placing them under the control of the Church.[21] Privately founded Orthodox schools not under direct church control played an important role in the spread of Orthodoxy among Russian minorities, prominent examples being the Kazan Central Baptised Tatar School, founded in 1863,[22] or the Simbirsk Central Chuvash School, founded in 1868.[23]

There are also Protestant-associated schools aimed at the children of expatriates, such as the International Academy of St. Petersburg, Russia, founded in 1993.

In many parts of Africa Christian missionary organisations have founded schools, often in places where no other schooling is available. Such schools generally provide a complete education in a Christian context.