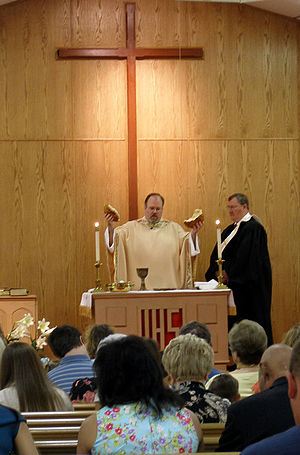 A Communion Sunday service at a United Methodist church in the United States.

In Christianity, a church service is a formalized period of communal worship, often but not exclusively occurring on Sunday, or Saturday in the case of those churches practicing seventh-day Sabbatarianism. The church service is the gathering together of Christians to be taught the 'Word of God' (the Christian Bible) and encouraged in their faith. Technically, the "church" in "church service" refers to the gathering of the faithful rather than to the building in which it takes place. For example, the pentecostal church believes the church is the "Body of Christ" as Christ is the head of the Church.

Styles of service vary greatly, from the Anglican, Eastern Orthodox, Oriental Orthodox, Presbyterian, Roman Catholic, and Lutheran traditions of liturgical worship to the evangelical Protestant style, that often combines worship with teaching for the believers, which may also have an evangelistic component appealing to the non-Christians and/or skeptics in the congregation. Quakers and some other groups have no formal outline to their services, but allow the worship to develop as the participants present feel moved.

From Jewish to Christian services

The first miracle of the Apostles, the healing of the crippled man on the temple steps, occurred because Peter and John went to the Temple to pray (Acts 3:1). Since the Apostles were originally Jews, see Jewish Christians, the concept of fixed hours for services, and services therefore which differed from weekday to Sabbath to holy day, were familiar to them. Pliny the Younger (63 - ca. 113), who was not a Christian himself, mentions not only fixed times of prayer by believers, but also specific services—other than the Eucharist—assigned to those times: "They met on a stated day before it was light, and addressed a form of prayer to Christ, as to a divinity ... after which it was their custom to separate, and then reassemble, to eat in common a harmless meal."[1]

The real evolution of the Christian service in the first century is shrouded in mystery. By the second and third centuries, such Church Fathers as Clement of Alexandria, Origen, and Tertullian wrote of formalised, regular services: the practice of Morning and Evening Prayer, and prayers at the third hour of the day (terce), the sixth hour of the day (sext), and the ninth hour of the day (none). With reference to the Jewish practices, it is surely no coincidence that these major hours of prayer correspond to the first and last hour of the conventional day, and that on Sundays (corresponding to the Sabbath in Christianity), the services are more complex and longer (involving twice as many services if one counts the Eucharist and the afternoon service). Similarly, the liturgical year from Christmas via Easter to Pentecost covers roughly five months, the other seven having no major services linked to the work of Christ. However, this is not to say that the Jewish services were copied or deliberately substituted, see Supersessionism. 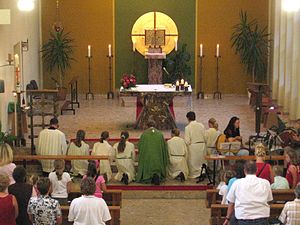 Today a wide variety of church services exist, from the long and elaborate services of Eastern Christianity to the very basic Evangelistic sermon. Though the majority of services are still conducted in church buildings designed specifically for that purpose, some services take place in "store front" or temporary settings. For those unable to attend a service in a church building a burgeoning televangelism and radio ministry provides broadcasts of services. A number of Websites have been set up as "cyber-churches" to provide a virtual worship space free to anyone on the Internet.

Church services are often planned and led by a single pastor or a small group of elders or may follow a format laid out by the dictates of the denomination. Some churches are "lay led" with members of the congregation taking turns guiding the service or simply following format that has evolved over time between the active members.

A few begin their church services with the ringing of a bell (or a number of bells). The service usually involves the singing of hymns, reading of scripture verses and possibly a psalm, and a sermon. If the church follows a lectionary, the sermon will often be about the scripture lections assigned to that day. Eucharistic churches have usually Holy Communion either every Sunday or several Sundays a month. Less liturgical congregations tend to place a greater emphasis on the sermon.

Vocal music is traditionally sung by a choir or the congregation (or a mixture of the two), usually accompanied by an organ. Sometimes other instruments such as piano, classical instruments, or modern band instruments may be part of the service, especially in churches influenced by the contemporary worship movement. Some churches are equipped with state-of-the-art multi-media equipment to add to the worship experience. The congregation may sing along in hymnals or words to hymns and worship songs may be displayed on a screen. More liturgical denominations may have the words to specific prayers written in a missalette, prayer book, or pew bulletin which the congregation follows.

Many churches will take up a collection during the service. The rationale for this is taken from 1 Corinthians 16:1-2, 1 Corinthians 9:9-11, and 1 Timothy 5:16-18. But some churches eschew this practice in favor of voluntary anonymous donations for which a box or plate may be set up by the entrance, or return-address envelopes may be provided that worshippers may take with them.

Following the service, there will often be an opportunity for fellowship in the church hall or other convenient place. This provides the members of the congregation a chance to socialize with each other and to greet visitors or new members. Coffee or other refreshments may be served.