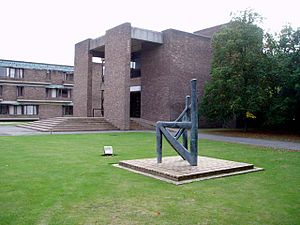 Churchill College is a constituent college of the University of Cambridge, England. It has a primary focus on science, engineering and technology, but still retains a strong interest in the arts and humanities.

In 1958, a trust was established with Sir Winston Churchill as its chairman of trustees, to build and endow a college for 60 fellows and 540 students as a national and Commonwealth memorial to Winston Churchill; its Royal Charter and Statutes were approved by the Queen, in August 1960.[1] It is situated on the outskirts of Cambridge, away from the traditional centre of the city, but close to the University's main new development zone (which now houses the Centre for Mathematical Sciences). Its 160,000 m² (42 acres) of grounds make it physically the largest of all the colleges.

Churchill was the first all-male college to decide to admit women, and was among three men's colleges to admit its first women students in 1972.[2] Within 15 years all others had followed suit. The college has a reputation for relative informality compared with other Cambridge colleges, and traditionally admits a larger proportion of its undergraduates from state schools.

The college motto is "Forward". It was taken from the final phrase of Winston Churchill's first speech to the House of Commons as Prime Minister—his famous "Blood, Toil, Tears and Sweat" speech - in which he said "Come, then, let us go forward together".[3]

In 1955, on holiday in Sicily soon after his resignation as Prime Minister, Winston Churchill discussed with Sir John Colville and Lord Cherwell the possibility of founding a new institution. Churchill had been impressed by MIT and wanted a British version, but the plans evolved into the more modest proposal of creating a science and technology based college within the University of Cambridge.[4] Churchill wanted a mix of non-scientists to ensure a well rounded education and environment for scholars and fellows. The college therefore admits students to read all subjects except Land Economy and Theology & Religious Studies (though it is possible to switch to these subjects later).

The first postgraduate students arrived in October 1960, and the first undergraduates a year later. Full College status was received in 1966. Initially all students were male. Women were not accepted as undergraduates until 1972.

The bias to science and engineering remains as policy to the current day, with the statutes requiring approximately 70% science and technology students amongst its student intake each year.[5] The college statutes also stipulate that one third of the students of the college should be studying for postgraduate qualification.

In 1958, a 42-acre (170,000 m²) site was purchased to the west of the city centre, which had previously been farmland. After a competition, Richard Sheppard was appointed to design the new college. Building was completed by 1968 with nine main residential courts, separate graduate flats and a central building consisting of the dining hall, buttery, combination rooms and offices.

The dining hall is the largest in Cambridge. It measures 22m square, 9m to the base of the vault beams, and 11.6m to the highest point. It can cater for up to 430 guests in a formal dining arrangement.

The main college buildings and courtyards are arranged around a large central space, in which the library was placed. Only a few years later, being opened in 1974, an extension to the library building was added to house the Churchill Archives Centre. Its original purpose was to provide a home to Sir Winston's papers, however since then it has been endowed with papers from other political figures including former Prime Ministers Margaret Thatcher and John Major, as well as former Leader of the Opposition Neil Kinnock, and those of eminent scientists and engineers including Reginald Victor Jones, Rosalind Franklin and Sir Frank Whittle.[6] 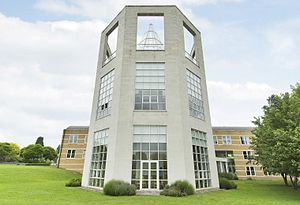 The Møller Centre for Continuing Education

In 1992, the Møller Centre for Continuing Education was built on the Churchill site, designed by Henning Larsen. It is a dedicated residential executive training and conference centre, aiming to bring together education and commerce.[7]

As well as the main College buildings, Sheppard designed a separate group of flats, known as the Sheppard flats, for the use of married graduate students. These are located to one side of the College grounds, a short distance from the main buildings.

At the farthest end of the college grounds is the Chapel. Sheppard's original design placed it within the main building complex near the college main entrance.[8] The idea of having a religious building within a modern, scientifically-oriented academic institution deeply annoyed some of the original fellows, leading to the resignation of Nobel Prize winner Francis Crick in protest.[9] Eventually a compromise was found: the chapel was sited just to the west of the Sheppard Flats,[10] and funded and managed separately from the rest of the College itself, being tactfully referred to as "the Chapel at Churchill College". The chimney of the heating system at the front of the college substitutes visually for the missing chapel tower.

Crick had agreed to become a fellow on the basis that no chapel be placed at Churchill. A donation was later made by Lord Beaumont of Whitley to Churchill College for the establishment of one, and the majority of fellows voted in favour of it. Sir Winston Churchill wrote to him saying that no-one need enter the chapel unless they wished to do so, and therefore it did not need to be a problem. Crick, in short order, replied with a letter dated 12 October 1961 accompanied by a cheque for 10 guineas saying that, if that were the case, the enclosed money should be used for the establishment of a brothel. This story was repeated by Crick in an interview with Matt Ridley (Crick's biographer[11]), quotes from which are reported in the Daily Telegraph.[12] 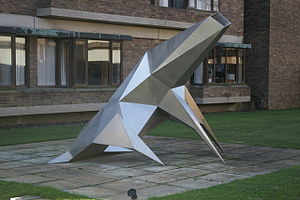 The college contains many examples of modern artwork including:

Mistry's piece can be found at the front of college. Sir Anthony Caro's Forum[15] used to stand near it but it was removed before the start of the 2004-2005 academic year. In January 2007 its place was taken by Beast Alerted 1, a sculpture by British sculptor Lynn Chadwick.

The student population is divided into two common rooms: the Junior Common Room (JCR) and Middle Common Room (MCR). The former contains undergraduates and the latter advanced students. Fourth year undergraduates studying towards their Masters may choose to be in either.[16] These student bodies organise various academic and social events as well as handling issues regarding welfare. The college funds sports clubs and societies which provide entertainment for students. 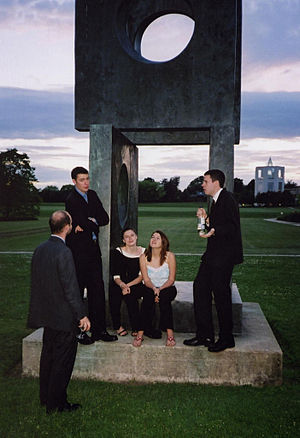 Students relaxing on 'The Hepworth' following a formal

Every two weeks of the Michaelmas and Lent terms, and twice in Easter term, Churchill is host to Pav, a music event unusual for Cambridge events in that it is free and open to all university members. The name Pav originates from the pavilion buildings of the college where the event was originally held. Since 1992, Pav has been held in the Buttery, the main bar area.

In the early years of the college's foundation, the college held a ball in May Week, in common with many older colleges. However, more recently Churchill has held a Spring Ball every February, close to Valentine's Day. The Ball has hosted a number of upcoming bands, such as The Wombats (2007) and The Noisettes (2008).

During May Week the JCR organise a free garden party. The event hosts performances from local bands and musicians.

Students of the College run Churchill Casino,[17] a Cambridge-based enterprise which provides professional casinos at various social events. Churchill Casino is frequently hired for Cambridge May Balls as well as balls at the University of Oxford and corporate events throughout the country. Profits have been donated back towards the college and to local charities.[18]

The MCR has its own reserved area, the Sandy Ashmore Room, where students may socialise. This incorporates a student-run bar known as the Vicious Penguin.[19] The MCR organises a range of activities including an annual conference, the Conference on Everything and hosts termly Guest Nights.[20] The Conference on Everything gives students an opportunity to present their own research as well as featuring talks from distinguished speakers including Salah Al-Shaikhly, the Iraqi ambassador to the United Kingdom; Michael Green, Lucasian Professor and pioneer of string theory; Julian Huppert, scientist and MP for Cambridge; David Spiegelhalter, Winton Professor of the Public Understanding of Risk, and Nicholas Bingham, Senior Investigator at Imperial College London and Visiting Professor of Mathematics at the London School of Economics.[21] 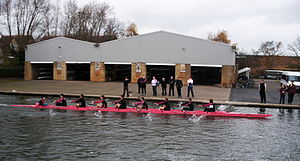 Churchill College Boat Club men's first VIII rowing past their boathouse on the River Cam, the club is noted for its pink boats

With playing fields on site, unlike many other colleges, sport is an integral part of the college. As well as football pitches, a cricket pitch and others, the facilities include a gym, and tennis and squash courts.

Churchill College Football Club (CCFC) were the first college team to retain the Cambridge University Amateur Football League Division 1 title, winning it in 2005–06 and 2006–07. In the 2006–2007 season they also reached the final of Cuppers.[citation needed] 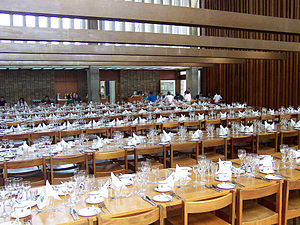 Churchill's Dining Hall is the largest in Cambridge.

Churchill is a relatively young college, and prides itself on being modern and forward looking. It has relatively few traditions. Students are not required to wear gowns at formal halls,[24] with exception of certain college feasts.

In special formal meals such as Matriculation Dinner or Scholars' Feast the Master usually raises a toast, first to The Queen and then to "Sir Winston". In other formal halls this is usually made by a senior student once the fellows have left. This tradition started in the early 2000s with the students customarily toasting in the reverse order: "Sir Winston", followed by "The Queen".

The Mastership of Churchill College is a Crown appointment. To date the College has had seven Masters: 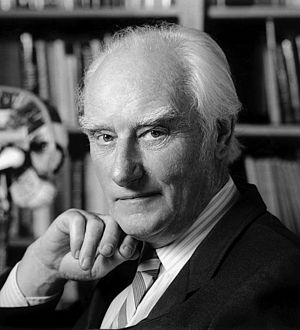 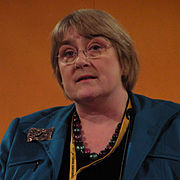 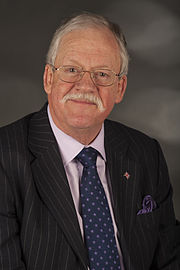