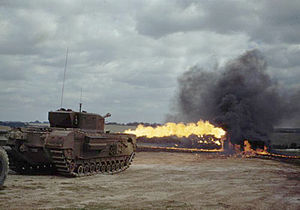 The Churchill Crocodile was a British flame-throwing tank of late Second World War. It was a variant of the Tank, Infantry, Mk VI (A22) Churchill Mark VII, although the Churchill Mark IV was initially chosen to be the base vehicle.

The Crocodile was introduced as one of the specialised armoured vehicles developed under Major-General Percy Hobart, informally known as "Hobart's Funnies". It was produced from October 1943, in time for the Normandy invasion.

From early in the war, there had been experiments with mounting flamethrowers on British vehicles; leading to vehicles such as the Cockatrice, Basilisk and the Wasp (the latter being a flamethrower on a Universal Carrier). The Churchill Oke, a flamethrower carrying Churchill Mark II developed by a Royal Tank Regiment officer, was tested operationally on the Dieppe Raid. Parallel development work was carried out by the Petroleum Warfare Department, AEC and the Ministry of Supply (MoS) on Valentine tanks. The Department of Tank Design preferred the Churchill, which was the Infantry tank successor to the Valentine, as a basis for further work.[1]

General Percy Hobart saw the Crocodile demonstrated in 1943 and pressured the MoS to produce a development plan[2] and the Chief of the General Staff added the flamethrowers to the 79th Division plan.

The flamethrower equipment was produced as a kit that REME workshops could fit in the field, converting any available Churchill Mk VII. The conversion kit consisted of the trailer, an armoured pipe fitted along the underside of the tank, and the projector, which replaced the hull mounted Besa machine gun. The Crocodile was therefore still able to function as a gun tank with its turret mounted Ordnance QF 75 mm gun.

Of the 800 kits produced, 250 were held in reserve for possible operations against the Japanese.[3] The remainder was sufficient for producing three regiments of tanks as well as training and replacements for battlefield casualties.

400 imperial gallons (1,800 l) of fuel[4] and the compressed nitrogen propellant, enough for eighty[5][6] one-second bursts, were stored in a 6½ ton detachable armoured trailer towed by the Crocodile. The trailer, connected to the tank by a three way armoured coupling,[7] could be jettisoned from within the tank if necessary.

The thrower had a range of up to 120 yards (110 m)[8] although some sources quote 150 yards (140 m).[9][10] The pressure required had to be primed on the trailer by the crew as close to use as feasible, because pressure could not be maintained for very long. The fuel was used at 4 gallons per second; refuelling took at least 90 minutes and pressurization around 15 minutes. The fuel burned on water and could be used to set fire to woods and houses. The flamethrower could project a "wet" burst of unlit fuel, which would splash around corners in trenches or strongpoints, and then ignite this with a second burst.

Used by units of the 79th Armoured Division in concert with the Churchill AVRE, and other Funnies, the Crocodile was an effective assault weapon whose threat could induce enemy troops to retreat or surrender. The Crocodile was a specialised weapon limited by the short range of its flamethrower. On the other hand, it was used so successfully against bunkers that many bunkers surrendered after the first ranging shots. Aspects of the mechanism were considered by the British to be so secret that disabled units, if they could not be recovered, were rapidly destroyed by any means, even air strike, if necessary.[11]

British Crocodiles supported the U.S. Army in the Normandy bocage, at the Battle for Brest, and during Operation Clipper, the Anglo-American assault on Geilenkirchen. C Squadron also supported the 53rd Welch Division assault on s`Hertogenbosch in October 1944.

The units that used the Crocodile were in Europe, the 31st Armoured Brigade:

From late 1950 until their withdrawal in 1951, Churchill Crocodiles served in Korea as part C Squadron, 7th Royal Tank Regiment in 29th Brigade.

Mark VII Crocodiles are owned by the Muckleburgh Collection in Norfolk, the Cobbaton Combat Collection in Devon, Eden Camp Museum in North Yorkshire, the D-Day museum in Portsmouth, the Wheatcroft Collection, the Kubinka Tank Museum in Russia and the Museum of the Regiments, Calgary, Alberta. A Mark VIII is at the Royal Australian Armoured Corps Museum. Two (one in running order) are privately owned in the UK. One in running order is under private ownership in the USA.[13] One example, without trailer, on display at the Bayeux Museum of the Battle of Normandy and one example with a trailer is held at the Bovington Tank Museum. Another one with trailer is on display on Fort Montbarey parade ground in Brest (Brittany); it was gifted to the Memorial by Queen Elizabeth.