Cinéma vérité (/ˈsɪnᵻmə vɛrᵻˈteɪ/; French: [sinema veʁite], truthful cinema) is a style of documentary filmmaking, invented by Jean Rouch, inspired by Dziga Vertov's theory about Kino-Pravda and influenced by Robert Flaherty’s films. It combines improvisation with the use of the camera to unveil truth or highlight subjects hidden behind crude reality.[1][2][3][4] 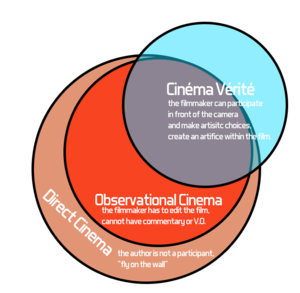 Cinéma Vérité in relationship to Direct Cinema and Observational Cinema.

It is sometimes called observational cinema,[5][6] if understood as pure direct cinema: mainly without a narrator's voice-over. There are subtle, yet important, differences among terms expressing similar concepts. Direct Cinema is largely concerned with the recording of events in which the subject and audience become unaware of the camera's presence: operating within what Bill Nichols,[7] an American historian and theoretician of documentary film, calls the "observational mode", a fly on the wall. Many therefore see a paradox in drawing attention away from the presence of the camera and simultaneously interfering in the reality it registers when attempting to discover a cinematic truth.

Cinéma vérité can involve stylized set-ups and the interaction between the filmmaker and the subject, even to the point of provocation. Some argue that the obvious presence of the filmmaker and camera was seen by most cinéma vérité filmmakers as the best way to reveal the truth in cinema.[8][9][10] The camera is always acknowledged, for it performs the raw act of filming real objects, people, and events in a confrontational way. The filmmaker's intention was to represent the truth in what he or she was seeing as objectively as possible, freeing people from any deceptions in how those aspects of life were formerly presented to them. From this perspective, the filmmaker should be the catalyst of a situation. Few agree on the meanings of these terms, even the filmmakers whose films are being described.

Pierre Perrault sets situations up and then films them, for example in Pour la suite du monde (1963) where he asked old people to fish for whale. The result is not a documentary about whale fishing; it is about memory and lineage. In this sense cinéma vérité is concerned with anthropological cinema, and with the social and political implications of what is captured on film. How a filmmaker shoots a film, what is being filmed, what to do with what was filmed, and how that film will be presented to an audience, all were very important for filmmakers of the time.

In all cases, the ethical and aesthetic analysis of documentary form of the 1950s and '60s has to be linked with a critical look at post-war propaganda analysis. The best way to describe this type of cinema is probably to say that it is concerned with notions of truth and reality in film. Also feminist documentary films of the 1970s often used cinéma-vérité techniques. Soon this sort of 'realism' was criticized for its deceptive pseudo-natural construction of reality.[11][12]

As Edgar Morin wrote: "There are two ways to conceive of the cinema of the Real: the first is to pretend that you can present reality to be seen; the second is to pose the problem of reality. In the same way, there were two ways to conceive cinéma vérité. The first was to pretend that you brought truth. The second was to pose the problem of truth."[13]

Filmmakers associated with the style

The techniques (if not always the spirit) of cinéma vérité can also be seen in fiction films such as The Battle of Algiers, The Blair Witch Project, Children of Men, Jimmy and Judy, Rachel Getting Married, Cloverfield, Diary of the Dead, District 9, Harry Potter and the Deathly Hallows - Part 1, Battle: Los Angeles, REC, Saving Private Ryan,The Bourne Ultimatum (film) and Paranormal Activity, among others.

Many film directors of the 1960s and later adopted use of the handheld camera, techniques and cinéma vérité styles for their fiction films based on screenplays and actors. They often had actors use improvisation to try to get a more spontaneous quality to the takes. Influential examples include director John Cassavetes, who broke ground with his film Faces.[19]

The techniques of cinéma vérité were also readily adapted to use in TV fiction programs, such as Homicide: Life on the Street, The X-Files' episode "X-Cops", Sanctuary, Friday Night Lights, NYPD Blue, Hill Street Blues, Battlestar Galactica, "The Shield", The Thick Of It, Curb Your Enthusiasm, Louie, Arrested Development, Reno 911!, Trailer Park Boys, various episodes of the Law & Order franchise, both the UK and American versions of The Office, Parks and Recreation, Brooklyn Nine-Nine and Veep. Documentary series are less common, but include:

One might argue that a pioneer of this style in television was Orson Welles in his 1955 program for British television, Around the World with Orson Welles.