From Infogalactic: the planetary knowledge core
(Redirected from Cincinnati Enquirer)
Jump to: navigation, search
For other uses, see Enquirer (disambiguation).

The Cincinnati Enquirer, a daily morning newspaper, is the highest-circulation print publication in Greater Cincinnati (Ohio) and Northern Kentucky. (The Enquirer publishes a Northern Kentucky edition under the title The Kentucky Enquirer with a front section and remade Local section. The front page is remade from the Ohio edition, although it may contain similar elements.) The Enquirer is a Gannett Co. Inc. newspaper and publishes a variety of print and electronic media, 16 Community Press weekly newspapers, 10 Community Recorder weekly newspapers, OurTown magazine, the cincinnati.com network of Web sites, and free-distribution advertising publications in the employment, automotive, real estate, rental, health care and shopping segments. Cincinnati.Com is The Enquirer's flagship electronic product, and encompasses 50 local and national information and advertising Web products.

The Cincinnati Daily Enquirer was first published April 10, 1841. The Enquirer became one of the first newspapers in the United States to publish a Sunday edition beginning on April 20, 1848. In at least the decade of the 1850s, The Enquirer also published a weekly digest edition for regional farmers. From before the Civil War to 1881, The Enquirer was owned by Washington McLean, a Copperhead whose editorial policies led to the suppression of the paper by the United States government during the Civil War. After the war, McLean pursued an anti-Republican stance. One of his star writers was Lafcadio Hearn, who wrote for the paper from 1872 to 1875. James W. Faulkner started was a newspaperman from the Enquirer who became the political correspondent for the paper covering the Ohio State Legislature and Statehouse from 1887 until his death. The Faulkner Letter was a well-known column often carried in regional newspapers. From 1881 to his death in 1916, it was run by his son, John Roll McLean. Having little faith in his only child, Ned, John Roll McLean put the Enquirer and another paper he owned, The Washington Post, in trust with a Washington, D.C. bank as trustee. Ned successfully broke the trust regarding The Post, an action that led to its bankruptcy and eventual sale to Eugene Meyer in 1933. The Enquirer, however, continued to be held in trust until 1952. 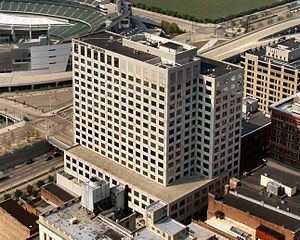 During the 1930s and 1940s The Enquirer was widely regarded among newspapers for its innovative and distinctive typography.

In 1952, the bank decided to sell to Charles Phelps Taft, the owner of the Cincinnati Times-Star and a member of the presidential Taft family, but the employees of the paper pooled their assets and obtained loans to outbid him. However, they lacked sufficient capital and managerial expertise to run the paper. Beset by financial problems and internal strife, the paper was sold to The E. W. Scripps Company in 1956, the owner of The Cincinnati Post. Scripps held the paper until 1968 when it was forced to sell after the government successfully brought an anti-trust action. American Financial, a company controlled by Cincinnati millionaire Carl Lindner bought the paper, selling it to another Lindner company, Combined Communications, in 1969. Combined Communications, based in Phoenix, merged with Gannett in 1979.

In 1977, the paper entered into a joint operating agreement with the other daily in Cincinnati, the afternoon Cincinnati Post. Under the agreement, The Enquirer handled all business functions of both papers, including printing, distribution, and selling advertising. In January 2004, The Enquirer informed the Post it would not be renewing the agreement upon its expiration December 31, 2007. This led to the closure of the Post, which left The Enquirer as the only daily newspaper in Greater Cincinnati and Northern Kentucky, a region that is home to more than 30 local weekly newspapers and several magazines and tabloids.

Beginning in 1866, The Enquirer was published from offices in the 600 block of Vine Street in downtown Cincinnati. Beginning in 1916, the newspaper constructed a new headquarters and printing plant on this property; its final details were finished in 1928.[2] The newspaper moved to its present Elm Street headquarters in 1992.[3]

On November 1, 1996, The Enquirer initiated daily publication of a free Internet edition containing most of the local content produced by its reporters, photographers, and columnists. The Enquirer also launched GoCinci.Net, an Internet Service Provider and free World Wide Web site that presented content from The Enquirer and the Post. In August 1998, The Enquirer renamed its Web site cincinnati.com. In May 2002, cincinnati.com was expanded to represent local news competitor WCPO-TV, owned by the E.W. Scripps Company.

In May 2003, Gannett Co. replaced Harry Whipple, who had been president and publisher for 11 years. Following Wipple, the Enquirer hired Margaret E. Buchanan, a Cincinnati native, who was previously publisher of the Idaho Statesman in Boise, Idaho. She was the newspaper's first woman publisher. Also in 2003, Tom Callinan, a veteran Gannett editor whose previous top positions included newspapers in Phoenix and Rochester, N.Y., became editor of the Enquirer.

In October 2005 The Enquirer launched NKY.com, a Web site covering news from the Northern Kentucky counties of Boone, Campbell and Kenton. This was one of the first newspaper-published Web sites to make extensive use of user-created content, featured prominently on its 38 community pages.

In April 2006, The Enquirer was cited by The Associated Press with the news cooperative's General Excellence Award, naming The Enquirer as the best major daily newspaper in Ohio. Earlier that year, parent Gannett Co. named The Enquirer the most improved of the more than 100 newspapers in the chain.[citation needed]

In October 2012, the online version of the Enquirer went to a pay to view format. Whereas in the past, online readers had full access to the paper online, they now get access to 30 free views per month, after that the reader is required to pay a monthly access fee.

In March 2013, The Enquirer began publishing in a smaller paper format and moved all publishing to The Columbus Dispatch in Columbus, Ohio. The Cincinnati printing facility was closed.[4]

In March 2015, The Enquirer hired Rick Green as the new President and Publisher.