On October 3, 2006, it was reported that a Windsor, Ontario, based company had been granted conditional approval to purchase and relocate the team [1], however that deal fell through [2]. On March 19, 2007, however, the AHL announced that the team had been purchased, and moved to Rockford, Illinois, to become the Rockford IceHogs (which was the name of a United Hockey League franchise).[3]

Numerous former Cincinnati Mighty Ducks were all together with Anaheim when they won the Stanley Cup in 2007. In addition, former coach Mike Babcock led Anaheim to a Stanley Cup Final appearance in 2003 before moving to Detroit. He won the 2008 cup with the Red Wings, he also led them to another finals spot the year after, and then led the Canadian national team to a gold medal in the 2010 Vancouver Games and in the 2014 Sochi games

The market was previously served by:

The team was replaced in this market by: 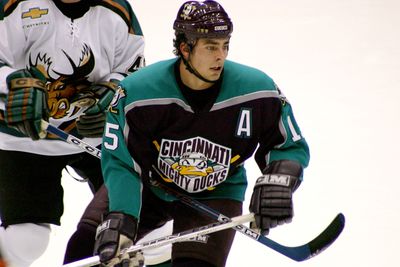 Joffrey Lupul playing for the Cincinnati Mighty Ducks in 2004.