Circassia (Adyghe: Адыгэ Хэку,[1] Russian: Черке́сия, Georgian: ჩერქეზეთი, Arabic: شيركاسيا‎‎[2]) is a region and historical country in the North Caucasus and along the northeast shore of the Black Sea. It is the ancestral homeland of the Circassian people. 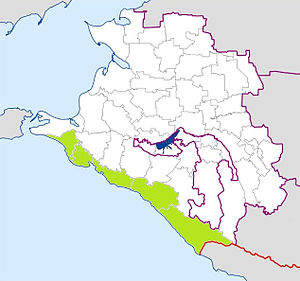 The name Circassia is a Latinisation of Cherkess (modern Turkish: Çerkes), the Turkic name for the Adyghe people, and originated in the 15th century with medieval Genoese merchants and travellers to Circassia.[3][4] The name Cherkess is traditionally applied to the Adyghe by neighbouring Turkic peoples (principally Crimean Tatars[5] and Ottoman Turks[6]).

Another historical name for the country was Zyx or the Zygii. The Zygii have been described by the ancient Greek intellectual Strabo as a nation to the north of Colchis.

At the end of the 15th century a detailed description of Circassia and of its inhabitants was made by Genoese traveller and ethnographer Giorgio Interiano.[7] 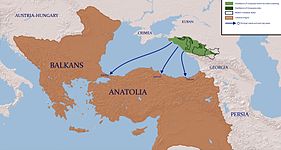 Map of the expulsion of Circassians to the Ottoman Empire.

Circassia was located in Eastern Europe, near the northeastern Black Sea coast. Before the Russian conquest of the Caucasus (1763–1864), it covered the entire fertile plateau and the steppe of the northwestern region of the Caucasus, with an estimated population of between 3 to 4 million.

Circassia’s historical great range extended from the Taman Peninsula in the west, to the town of Mozdok in today’s North Ossetia–Alania in the east. Historically, Circassia covered the southern half of today’s Krasnodar Krai, the Republic of Adygea, Karachay-Cherkessia, Kabardino-Balkaria, and parts of North Ossetia–Alania and Stavropol Krai, bounded by the Kuban River on the north which separated it from the Russian Empire.

Sochi is considered by many Circassians as their traditional capital city.[8] According to Circassians, the 2014 Winter Olympic village is built in an area of mass graves of Circassians after their defeat by the Russians in 1864.[9]

Under Russian and Soviet rule, ethnic and tribal divisions between Circassians (and other peoples) were promoted, resulting in several different statistical names being used for various parts of the Circassian people (Adyghes, Cherkess, Kabardins, Shapsugs). Consequently, there is an effort among Circassians to unite under the name Circassian (Adyghe) in Russian Censuses to reflect and revive the concept of the Circassian nation. The majority of the diaspora already tends to call itself "Circassian".