From Infogalactic: the planetary knowledge core
Jump to: navigation, search
For other uses, see Circe (disambiguation). 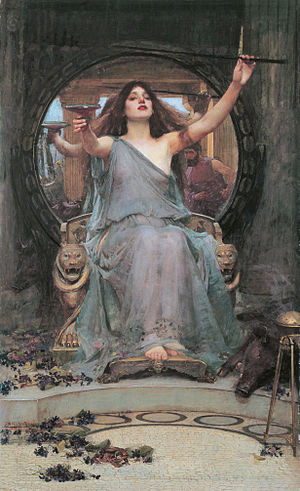 Circe Offering the Cup to Odysseus (1891) by John William Waterhouse

In Greek mythology, Circe (/ˈsɜːrsiː/; Greek Κίρκη Kírkē pronounced [kírkɛ͜ɛ]) is a goddess of magic (or sometimes a nymph, witch, enchantress or sorceress). By most accounts, Circe was the daughter of Helios, the god of the sun, and Perse, an Oceanid. Her brothers were Aeetes, the keeper of the Golden Fleece, and Perses. Her sister was Pasiphaë, the wife of King Minos and mother of the Minotaur.[1] Other accounts make her the daughter of Hecate, the goddess of witchcraft herself.[2]

Circe was renowned for her vast knowledge of potions and herbs. Through the use of magical potions and a wand or a staff, she transformed her enemies, or those who offended her, into animals. Some say she was exiled to the solitary island of Aeaea by her subjects and her father for ending the life of her husband, the prince of Colchis. Later traditions tell of her leaving or even destroying the island and moving to Italy, where she was identified with Cape Circeo.

In Homer's Odyssey, Circe is described as living in a mansion that stands in the middle of a clearing in a dense wood. Around the house prowled strangely docile lions and wolves, the drugged victims of her magic;[3] they were not dangerous, and fawned on all newcomers. Circe worked at a huge loom.[4] She invited Odysseus' crew to a feast of familiar food, a pottage of cheese and meal, sweetened with honey and laced with wine, but also laced with one of her magical potions, and drunk from an enchanted cup.[5] Thus so she turned them all into swine with a wand after they gorged themselves on it. Only Eurylochus, suspecting treachery from the outset, escaped to warn Odysseus and the others who had stayed behind at the ships. Odysseus set out to rescue his men, but was intercepted by the messenger god, Hermes, who had been sent by Athena. Hermes told Odysseus to use the holy herb moly to protect himself from Circe's potion and, having resisted it, to draw his sword and act as if he were to attack Circe. From there, Circe would ask him to bed, but Hermes advised caution, for even there the goddess would be treacherous. She would take his manhood unless he had her swear by the names of the gods that she would not.

Odysseus followed Hermes' advice, freeing his men and then remained on the island for one year, feasting and drinking wine. According to Homer, Circe suggested two alternative routes to Odysseus to return to Ithaca: toward Planctae, the "Wandering Rocks", or passing between the dangerous Scylla and the whirlpool-like Charybdis, conventionally identified with the Strait of Messina. She also advised Odysseus to go to the Underworld and gave him directions.[6]

Towards the end of Hesiod's Theogony (1011ff.), it is stated that Circe bore Odysseus three sons: Ardeas or Agrius (otherwise unknown); Latinus; and Telegonus, who ruled over the Tyrsenoi, that is the Etruscans. The Telegony (Τηλεγόνεια), an epic now lost, relates the later history of the last of these. Circe eventually informed him who his absent father was and, when he set out to find Odysseus, gave him a poisoned spear. With this he killed his father unknowingly. Telegonus then brought back his father's corpse, together with Penelope and Odysseus' other son Telemachus, to Aeaea. After burying Odysseus, Circe made the others immortal. According to Lycophron's Alexandra (808) and John Tzetzes' scholia on the poem (795 - 808), however, Circe used magical herbs to bring Odysseus back to life after he had been killed by Telegonus. Odysseus then gave Telemachus to Circe's daughter Cassiphone in marriage. Some time later, Telemachus had a quarrel with his mother-in-law and killed her; Cassiphone then killed Telemachus to avenge her mother's death. On hearing of this, Odysseus died of grief.

Dionysius of Halicarnassus (1.72.5) cites Xenagoras, the second century BC historian, as claiming that Odysseus and Circe had three sons: Rhomus, Anteias, and Ardeias, who respectively founded three cities called by their names: Rome, Antium, and Ardea. In a very late Alexandrian epic from the 5th century AD, the Dionysiaca of Nonnus, her son by Poseidon is mentioned under the name of Phaunos.[7]

In the 3rd century BC epic, the Argonautica, Apollonius Rhodius relates that Circe purified the Argonauts for the death of Absyrtus,[8] maybe reflecting an early tradition.[9] In this poem, the animals that surround her are not former lovers transformed but primeval ‘beasts, not resembling the beasts of the wild, nor yet like men in body, but with a medley of limbs.’[10]

Three ancient plays about Circe have been lost: the work of the tragedian Aeschylus and of the 4th century BC comic dramatists Ephippus of Athens and Anaxilas. The first told the story of Odysseus' encounter with Circe. Vase paintings from the period suggest that Odysseus' half-transformed animal-men formed the chorus in place of the usual Satyrs. Fragments of Anaxilas also mention the transformation and one of the characters complains of the impossibility of scratching his face now that he is a pig.[11]

The theme of turning men into a variety of animals was elaborated by later writers, especially in Latin. In the Aeneid, Aeneas skirts the Italian island where Circe now dwells, and hears the cries of her many victims, who now number more than the pigs of earlier accounts:

The roars of lions that refuse the chain,
The grunts of bristled boars, and groans of bears,
And herds of howling wolves that stun the sailors' ears.[12]

Ovid's Metamorphoses collects more transformation stories in its 14th book. The fourth episode covers Circe's encounter with Ulysses (lines 242-307). The first episode in that book deals with the story of Glaucus and Scylla, in which the enamoured sea-god seeks a love filtre to win Scylla's love, only to have the sorceress fall in love with him. When she is unsuccessful, she takes revenge on her rival by turning Scylla into a monster (lines 1-74). The story of the Latin king Picus is told in the fifth episode (and also alluded to in the Aeneid). Circe fell in love with him too; when he preferred to remain faithful to his wife Canens, she turned him into a woodpecker (lines 308-440).[13]

The gens Mamilia - described by Titus Livius as one of the most distinguished families of Latium[14][15] - claimed descent from Mamilia, a granddaughter of Odysseus and Circe through Telegonus. One of the most well known of them was Octavius Mamilius (died 498 BC), princeps of Tusculum and son-in-law of Lucius Tarquinius Superbus the seventh and last king of Rome.

Main article: Circe in the arts

In her survey of the Transformations of Circe, Judith Yarnall comments of this figure, who started out as a comparatively minor goddess of unclear origin, that “What we know for certain - what Western literature attests to – is her remarkable staying power…These different versions of Circe’s myth can be seen as mirrors, sometimes clouded and sometimes clear, of the fantasies and assumptions of the cultures that produced them.” After appearing as just one of the characters that Odysseus encounters on his wandering, "Circe herself, in the twists and turns of her story through the centuries, has gone through far more matamorphoses than those she inflicted on Odysseus's companions."[16]

Depictions, even in Classical times, wandered away from the detail in Homer's narrative, which was later to be reinterpreted morally as a cautionary story against drunkenness. Early philosophical questions were also raised whether the change from a reasoning being to a beast was not preferable after all, and this paradox was to have a powerful impact in the Renaissance. In later Christian opinion, Circe was an abominable witch using miraculous powers to evil ends. When the existence of witches came to be questioned, she was reinterpreted as a depressive suffering from delusions.[17] Circe was also taken as the archetype of the predatory female until her cause was taken up by women authors, who raised the question of whether this view had more to do with male fantasies than with the truth.

Western paintings established a visual iconography for the figure, but also went for inspiration to other stories concerning Circe that appear in Ovid's Metamophoses. The episodes of Scylla and Picus added the vice of violent jealousy to her bad qualities and made her a figure of fear as well as of desire. Later male interpretations were to take the metamophoses she inflicted not just as reflecting a temptation to bestiality but as an emasculatory threat.

Retellings from the middle ages to modern times 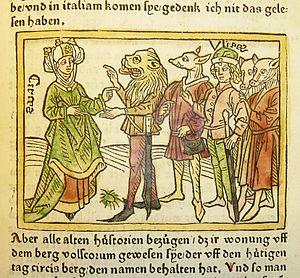 Woodcut of the Circe episode from a translation by Heinrich Steinhöwel of Boccaccio's De mulieribus claris (c.1474)

In botany the Circaea are plants belonging to the enchanter's nightshade genus. The name was given by botanists in the late 16th century in the belief that this was the herb used by Circe to charm Odysseus' companions.[23] Medical historians have speculated that the transformation to pigs was not intended literally but refers to anticholinergic intoxication.[24] Symptoms include amnesia, hallucinations, and delusions. The description of "moly" fits the snowdrop, a flower of the region that contains galantamine, which is an anticholinesterase and can therefore counteract anticholinergics.