Until 2013 the track was known only as the Circuit de Catalunya, before a sponsorship deal with Barcelona City Council added Barcelona to the track's title.[3]

When first used, overtaking was frequent as cars could follow closely through the last two corners and slipstream down the long straight. As aerodynamic balance became more critical, this overtaking method drastically decreased as the cars were unable to follow each other through the fast final corner due to turbulence created by the leading car.[4] The 2007 season saw the first of the two final sweepers replaced with a slow chicane in an effort to improve overtaking. However, the redesign has not yet shown any effect.[4]

The Circuit de Barcelona-Catalunya also plays host to many other racing series, including MotoGP. The chicane which was put in the penultimate turn for Formula 1 does not play a part in the track layout for Moto GP, and there are at least five points on the track (turns 1, 2, 4, 10, 14) where riders are known to overtake. As in Formula 1, turn one is arguably the most popular place for overtaking. The circuit is not known to produce copious amounts of overtaking, despite the long straights.

The wind direction at the circuit can change drastically during the day, a significant factor given the importance of aerodynamics to modern Formula One cars. It is then hard to find a good setup since cars can have massive aerodynamic drag and understeer on one part of the circuit in the morning, but suffer oversteer at the same part of the circuit in the afternoon. A given tyre compound can work well when tested, but not so well a couple of months later. These changeable conditions can make for unexpected performances from some teams during the race. The changeable wind conditions have also caused accidents at the circuit, with Fernando Alonso's testing accident in 2015 partly blamed on the severity of the wind.

The World RX of Spain uses parts of the track near turns 11-15, with two additional gravel sections. 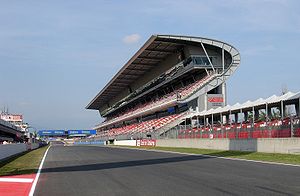 Turn 1 is the main overtaking point at Catalunya, as it is a braking zone at the end of a long DRS straight. The inside and outside are just as difficult as each other for overtaking; if you can hold it around the outside of turn one, then you get the inside for turn two. The corners themselves make up a medium speed chicane — you brake rather late for turn one (Elf[6]) and shift down to gear two, and turn two is almost full throttle as you try and gain as much exit speed as possible. Turn 3 (Renault[6]) is a long, flat out (in some cars) right-hander that has a g-force of about four,[6] and it leads onto a short straight before turn 4, the Repsol[6] curve. Another right-hander, turn four is similar to Monza's Curva Parabolica — you brake and take an early apex (in third gear), before carrying lots of speed out of the exit. Turn 5 (Seat[6]) comes immediately after and is a slow left-hander taken in second gear which drops rapidly downhill towards the left kink of turn 6 which is ignored by F1 cars. Turns 7 and 8 make up a medium-speed, uphill, left-right chicane. Drivers brake and shift down to gear three, and must not run too wide as turn eight has a large kerb on its apex which could potentially damage cars' suspensions. Turn 9, Campsa Corner, is a very fast, sixth gear right-hander which is made incredibly difficult because it is completely blind to the drivers. It is initially quite steep uphill but the exit is then downhill, making it blind, so it is quite easy to run wide onto the astroturf.[6] The long back straight leads into turn 10 (La Caixa), a second-gear, left-hand hairpin, then turns 11 and 12, a left kink before a long, slow, third-gear right. The next section has been redesigned by German engineer Hermann Tilke to lower speeds onto the 1,047 metre pit straight — which in turn increases overtaking opportunities and safety.[7] Turn 13 is a tight, third gear right-hander and drivers have to quickly cross the circuit to take the racing line through the slow left-right chicane of turns 14 and 15, taken in second gear. Good traction is needed here as it determines speed down the pit straight.[6] Turn 16 (New Holland[6]) is a flat-out right-hander which takes you across the line.

The circuit has been the site of some memorable moments. In 1991, Ayrton Senna and Nigel Mansell went down the entire front straight side-by-side while dueling for second place, with Mansell eventually taking the position and ultimately the race itself.[4] In 1994, Michael Schumacher managed to finish in second place despite driving over half the race with only fifth gear. In 1996, Schumacher took his first win as a Ferrari driver, after a dominant performance during a torrential rainstorm. The 1999 race was notable as there was only one reported overtaking move during the race. In 2001, Mika Häkkinen suffered a clutch failure while leading the race on the last lap, handing the win to Schumacher. At the 2006 event, Fernando Alonso became the first Spanish Formula One driver to win at his home country's track.[4]

In 2008, Heikki Kovalainen left the track at 240 km/h (149 mph) after a wheel rim failure at turn 9. He managed to decelerate to 130 km/h (81 mph) when he hit the tyre barrier. He was temporarily unconscious and suffered a minor concussion,[8] but a few minutes later, spectators were relieved when he gave a thumbs up.

At the 2009 motorcycle Grand Prix, teammates Valentino Rossi and Jorge Lorenzo fought all race long for first place, culminating in an overtake on the final corner by Rossi. Riders and pundits described the race as "historic" and "genius".[9]