Circuit de Monaco is a street circuit laid out on the city streets of Monte Carlo and La Condamine around the harbour of the principality of Monaco. It is commonly referred to as "Monte Carlo" because it is largely inside the Monte Carlo neighbourhood of Monaco.

The circuit is used on one weekend in the month of May of each year to host the Formula One Monaco Grand Prix. Formula One's respective feeder series over the years – F2, Formula 3000 and today GP2 – also visit the circuit concurrently with Formula One.

The original layout of the track

The idea for a Grand Prix race around the streets of Monaco came from Antony Noghès, the president of the Monegasque motor club, Automobile Club de Monaco, and close friend of the ruling Grimaldi family. The inaugural race was held in 1929 and was won by William Grover-Williams in a Bugatti. 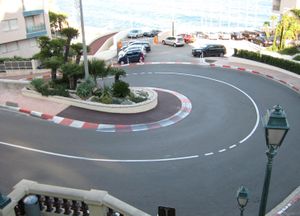 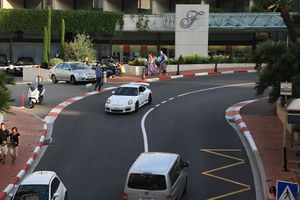 The building of the circuit takes six weeks, and the dismantling after the race another three weeks. The race circuit has many elevation shifts, tight corners and is narrow. These features make it perhaps the most demanding track in Formula One racing. Although the course has changed many times during its history, it is still considered the ultimate test of driving skills in Formula One.[according to whom?] It contains both the slowest corner in Formula One [the Fairmont Hairpin, taken at just 48 km/h (30 mph)] and one of the quickest [the flat out kink in the tunnel, three turns beyond the hairpin, taken at 260 km/h (160 mph)].

Due to the tight and twisty nature of the circuit, it favours the skill of the drivers over the power of the cars. However, there is very little overtaking as the course is so narrow and dangerous. Nelson Piquet likened racing round the course to "riding a bicycle around your living room".[1] Prior to 1987, the number of cars starting the race was limited to 20, compared to 26 at other circuits. The famous tunnel section (running under the Fairmont Hotel, marked in grey in the circuit diagram above) is said to be difficult for drivers to cope with due to the quick switch from light to dark, then back to light again, at one of the fastest points of the course. As a result, race outcomes tend to be decided by grid positions as well as pit strategies, and is extremely hard on gearboxes and brakes.

Several attempts have been made to improve cramped conditions in the pit garages. In 2002, a substantial amount of land was reclaimed from the harbour to slightly change the shape of one section of the circuit; this left more space for new pit garages, which debuted in the 2004 event.

The circuit is generally recognised to be less safe than other circuits used for Formula One. Driver and former winner Michael Schumacher stated before the 2012 Grand Prix that the additional risk is "justifiable once a year".[2] If it were not already an existing Grand Prix, it would not be permitted to be added to the Formula One schedule, for safety reasons.[3]

In January 2009, the circuit was voted top of the "Seven Sporting Wonders of the World" in a poll of 3,500 British sports fans.[4]

A lap of the modern day circuit 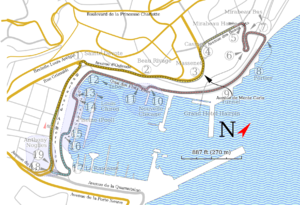 The lap starts with a short sprint up Boulevard Albert 1er, to the tight St. Devote corner. This is a nearly 90 degree right-hand bend usually taken in first or second gear.[5] This corner has seen many first lap accidents, although these are less common since the removal of the mini roundabout on the apex of the corner before the 2003 event, making the entrance to the corner wider. The cars then head uphill along Avenue d'Ostende, before changing down for the long left-hander at Massenet.

Out of Massenet, the cars drive past the famous casino before quickly reaching the aptly named Casino Square. This part of the track is 44 metres higher than the lowest part. The cars snake down Avenue des Beaux Arts, the next short straight, avoiding an enormous bump on the left of the track, a reminder of the unique nature of the circuit. This leads to the tight Mirabeau corner, which is followed by a short downhill burst to the even tighter Fairmont Hairpin (was known as the Station Hairpin before the hotel was opened on the site in 1973; the hairpin's name changed depending on the name on the hotel)[6]). It is a corner which has been used for many overtaking manoeuvres in the past. However it would be almost physically impossible for two modern F1 cars to go round side by side, as the drivers must use full steering lock to get around. It is so tight that many Formula 1 teams must redesign their steering and suspension specifically to negotiate this corner.

After the hairpin, the cars head downhill again to a double right-hander called Portier before heading into the famous tunnel, a unique feature of a Formula One circuit. (Until 2009 only one other circuit, Detroit USA in 1982–88, featured a tunnel, but the F1 series now includes racing at the Yas Marina Circuit in Abu Dhabi, which presents a shorter tunnel at the exit of the pit lane.) As well as the change of light making visibility poor,[7] a car can lose 20–30% of its downforce due to the unique aerodynamic properties of the tunnel.[7] The tunnel also presents a unique problem when it rains. As it is virtually indoors, the tunnel usually remains dry while the rest of the track is wet, with only the cars bringing in water from their tyres. Famously before the very wet 1984 race, Formula One boss Bernie Ecclestone had local fire crews wet down the road in the tunnel to give it the same surface grip as the rest of the track. This was done at the request of McLaren driver Niki Lauda. 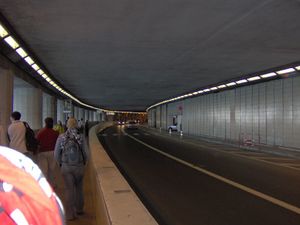 Out of the tunnel, the cars have to brake hard for a tight left-right-left chicane. This has been the scene of several large accidents, including that of Karl Wendlinger in 1994, Jenson Button in 2003 and Sergio Pérez in 2011. The chicane is generally the only place on the circuit where overtaking can be attempted. There is a short straight to Tabac, a tight fourth gear corner which is taken at about 195 km/h (120 mph).[8] Accelerating up to 225 km/h (140 mph),[8] the cars reach Piscine, a fast left-right followed by a slower right-left chicane which takes the cars past the Rainier III Nautical Stadium, its swimming pool gives its name to the corner.

Following Piscine, there is a short straight followed by heavy braking for a quick left which is immediately followed by the tight 135 degree right-hander called La Rascasse. This is another corner which requires full steering lock; it will be remembered for a long time as the location of one of the most suspicious manoeuvres in recent Formula One history after the 2006 season when Michael Schumacher appeared to deliberately stop his car in qualifying so as to prevent Fernando Alonso and Mark Webber – who were both following and were on flying laps – from out-qualifying him. The Rascasse takes the cars into a short straight that precedes the final corner, Virage Antony Noghes. Named after the organiser of the first Monaco Grand Prix, the corner is a tight right-hander which brings the cars back onto the start-finish straight, and across the line to start a new lap. 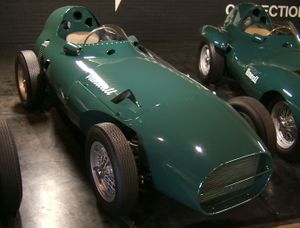 Monaco's street circuit places very different demands on the cars in comparison to the majority of the other circuits used during a Championship season. The cars are set up with high downforce, not as is popularly believed to increase cornering speeds, as many of the corners are taken at such a low speed to negate any aerodynamic effect, but instead to shorten braking times and keep the cars stable under acceleration.[9] Many teams use special wing assemblies incorporating extra active planes in addition to those in use for other circuits. The Jordan and Arrows teams tried to use new mid-wings in 2001. The Arrows wing was similar in design to a normal rear wing, but smaller and suspended above the nose cone. Jordan had a small wing suspended on a short pole just in front the driver. Both were designed to improve downforce, but, after testing them during Thursday practice, the FIA banned both.

Brake wear is not a problem during a race in Monaco. Instead the low speeds mean the issue is keeping the brakes up to working temperature. The only heavy braking points are at the chicane after the tunnel, and to a lesser extent into the Ste Devote and Mirabeau corners. With a lack of temperature brake bite becomes a problem, as the surface of the carbon brake disc becomes smooth as glass, reducing friction between the pads and the disk, hence lessening braking power[citation needed]. To combat this, in 2006 Juan Pablo Montoya adopted discs with radial grooves that increase the bite rate between disk and pads, increasing the average temperature of the brakes.

Conversely, cooling the cars' engines is a major concern. Formula One cars do not incorporate any form of forced cooling, relying solely on air moving over the car to remove heat from the radiator elements. In the past many teams used to adjust the radiator intakes to allow for extra airflow, creating the once-common "Monaco nose". Teams also use closer ratio gears, as there are hardly any long straights in Monaco and acceleration is at a premium. A special steering rack with a larger pinion gear is also fitted to allow the cars to be driven around the tightest corners. Some Formula One teams use other specifically designed components for this circuit.

The circuit has been used as a special stage during the WRC Monte Carlo Rally, for example in 2008. 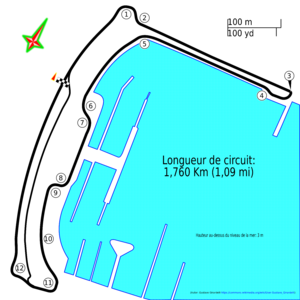 This is the map of the shorter version of the original Circuit de Monaco, which will be used for the Monaco ePrix in the 2014–15 Formula E season.

On 18 September 2014 it was announced the Formula E would be racing on a shorter version of the original Monaco Grand Prix circuit for the 2014–15 season.[10] This version misses out the hill, Casino square, the iconic hairpin, the famous tunnel and the chicane.

Monaco is not scheduled to be on the calendar for the second season of Formula E because it takes the slot on the calendar filled by the Historic Grand Prix at Monaco every other year. Series boss Alejandro Agag has revealed that a race in Paris is a strong possibility for season two of the series, which would replace the Monaco ePrix.