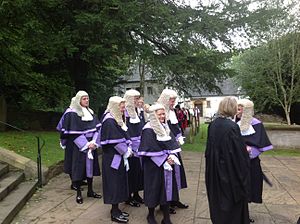 Until April 1, 2005 there were six court circuits in England and Wales, namely the Midland, Northern, North Eastern, South Eastern and Western circuits, and the Wales and Chester circuit. On that date, following the creation of Her Majesty's Courts Service (HMCS), the circuits were replaced by seven regions: Midlands, North West, North East, South East, London, South West and Wales.

Formerly, circuit judges could only be drawn from barristers and solicitors of at least 10 years' standing.[3] However, in 2004 there were calls for increased diversity among the judiciary that were recognised and the qualification period was changed[4][5] so that, as of 21 July 2008, a potential Circuit judge must satisfy the judicial-appointment eligibility condition on a 7-year basis.[6]

When hearing criminal cases, Circuit judges wear a violet robe with lilac trim, bands, a short horsehair wig and a red tippet (sash) over the left shoulder. For civil cases the tippet is lilac and neither bands nor wigs are worn. When sitting at the Old Bailey, and for some types of High court work, circuit judges wear a black silk gown over a court coat or a waistcoat.[7] On ceremonial occasions they wear violet robes with a lilac trim and a full-bottomed wig.

In Rumpole and the Reign of Terror by John Mortimer, Horace Rumpole dismisses the idea of being a Circuit judge: "Circus judge is what I call them."[8]