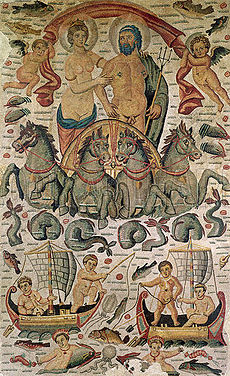 Detail of Triumph of Neptune and Amphitrite (ca. 315-325 AD), a vast Roman mosaic from Cirta. Now in the Louvre.

Cirta (from Berber: KRTN or Kirthan,[1] Phoenician: Tzirta) was the capital city of the Berber Kingdom of Numidia in northern Africa (modern Algeria). Its strategically important port city was Russicada. Although Numidia was a key ally of the ancient Roman Republic during the Punic Wars (264 BC–146 BC), Cirta was subject to Roman invasions during the 1st and 2nd centuries BC. Eventually went under Roman dominion during the rule of Julius Caesar. Cirta was then repopulated by Italian colonists by Caesar and Augustus and was surrounded by a "Confederation of free Roman cities" (Tiddis, Cuicul, Milevum, etc.) The city was destroyed in the beginning of the 4th century and was rebuilt by the Roman Emperor Constantine the Great, who gave his name to the newly constructed city, Constantine. Vandals damaged Cirta, but emperor Justinianus I reconquered and improved the roman city. Arabs finally destroyed it in 698 AD, reducing the former Christian city to a small Moslem village that only after some centuries recovered some importance.

File:Fossatum.png
Cirta in Roman times was protected to the south and west by the "Limes romanus" called Fossatum Africae

Cirta was an important roman colonia in Berber Africa characterized by a full latinisation during the late Roman Empire: it was fully Latin speaking and Christian when the Vandals arrived in 430 AD, according to historian Theodore Mommsen.[2] Pliny calls the city as the first century roman colonia "Cirta Sittianorum",[3] together with Rusicade, Milevum and Chullu in what was an autonomous territory of the new province Africa Nova.

Indeed, Rome allowed Publius Sittius and his Italian legionaries from Campania to rule the territory of Cirta and surroundings with the Latin name of Respublica IIII coloniarum Cirtensium.[4] Later, with the expansion of the Roman limes, Cirta was at the center of the most romanised area in Roman Africa (protected by the Fossatum Africae stretching from Sitifis and Icosium (modern Algiers) to Capsa and the modern Gulf of Gabès.

However under Publius Sittius Cirta was a special colony with some autonomy from Rome, but under emperor Augustus the city obtained full roman status as colonia with the name Iulia Iuvenalis Honoris et Virtutis Cirta in 27 BC. Since then Cirta started to grow enormously as an economic center of Roman Africa.

The city by the end of the second century -when Christianity started to be important- had nearly 50,000 inhabitants, according to historian Robin Daniel.[5]

Roman influence before 46 BC

Cirta's populace was as diverse as the Roman Republic itself — alongside native Numidians were Carthaginians displaced by the Second and Third Punic Wars, as well as Greeks, Romans, and Italians.[6] It served as an economic hub for Rome’s African empire, as it was inhabited by Roman and Italian merchants, bankers, and businessmen.[7] Even prior to Cirta’s fall to Julius Caesar, these economic elites constituted an important segment of the city's population, as they kept it within Rome’s sphere of influence without having to be directly controlled.

Not only was Cirta an important economic site, it was also a key political and military spot within the African kingdoms. During the Second Punic War, the Battle of Cirta (203 BC) marked a decisive Roman victory for Scipio Africanus against Rome's most formidable rival in the Mediterranean — Carthage. Moreover, Rome illustrated its willingness to defend its interests in Cirta into the late 2nd century BC following the death of Micipsa, King of Numidia, in 118 BC.[8] A power struggle ensued between his adopted son Jugurtha and his natural son Adherbal.[8] Adherbal appealed to Rome to help broker a truce and to help evenly split the kingdom between the two heirs. Despite a senatorial commission’s seemingly successful mediation, Jugurtha besieged Cirta, killing Adherbal and Italian elites who defended him.[8] Subsequently, Rome declared war on the kingdom to assert its hegemony in the region and to defend those citizens who lived outside of the homeland. Jugurtha’s defeat at Cirta at the hands of the Roman army is commonly referred to as the Jugurthine War.

Roman Cirta: 46 BC and after

Caesar's conquest of Northern Africa officially brought Cirta under direct Roman rule in 46 BC.[9] It was during the rule of Augustus, however, when Cirta's territory expanded and assimilated into the empire. Augustus split Cirta into communities, or pagis, dividing Numidians and newly settled Romans.[10] In 26 BC, the emperor attempted to increase Roman settlement in the city by supplementing the Sittiani — followers of Sittius Nucerinus, a man from Italian Nucera whom Julius Caesar had personally appointed to "Romanize" the city.[11] This helped facilitate Cirta's assumption into the Roman realm, culturally and economically. These settlers, of course, were augmenting those Romans who had inhabited the city since the earlier periods of the Punic Wars, namely the Italian business elite.

In the first two centuries AD Christianity began to take root in Cirta. While little remains of African Christianity before 200 AD, records of martyred Christians at Cirta existed by mid-century.[12] Civil war in 311 marked the destruction of the city; however, the first Christian emperor Constantine rebuilt it in his own name in 313 AD, calling it Constantine.[13]

The town of Cirta had become a Roman colony, probably as early as the time of Sittius. At the beginning of the 2d c. it was the capital of a curious administrative district, one of those anomalies common to the administrative history of Africa. It was the capital of the confederation of the IV colonies, the three others being Rusicade, Chullu, and Milev. Its magistrates and municipal assembly were those of the confederation. On the other hand, Cirta itself possessed castella distributed throughout the area of the High Plains and to the N of the region: Castellum Mastarense, Elephantum, Tidditanorum, Cletianis, Thibilis, Sigus, etc. After the dissolution of this confederation, Cirta recovered its role as a capital when it headed Numidia Cirtenses (created under Diocletian) and, later, all of Numidia. At that time it changed its name to Constantina in honor of the emperor who restored it to its splendor after a siege undertaken by the usurper Domitius Alexander.Constantine was an important center of the Christian community as early as the 3d c. It became the chief town of an ecclesiastical district and was an important city until the end of antiquity. Although many ancient cities disappeared during the Arab Middle Ages, Constantine survived. Perseus [14]

Cirta was renamed by Constantine I: "Civitas Constantina Cirtensium". It was surrounded by a "Confederation of free Roman cities" (Tiddis, Cuicul, etc.), that in the fourth century was dismantled. In 412 AD in Cirta was done an important Christian Council, ruled by Saint Augustine. Under the emperor Justinianus I the city walls were reinforced and the city was named capital of the region with a Byzantine "Dux" resident. Cirta was part of the Byzantine Exarchate of Africa from 534 AD to 697 AD. It was conquered by the Arabs in the 7th century, receiving later the name of Qusantina.

When the Arabs conquered the region, berber queen Kahina fought in the city, that was partially destroyed. Since then Cirta -now called "Constantina"- lost importance, but remained inhabited: for a couple of centuries and until the tenth century there was even a small Christian community.