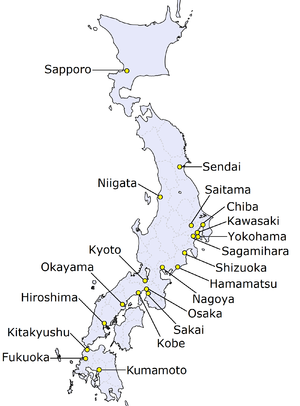 Designated cities are also required to subdivide themselves into wards (区, ku?), each of which has a ward office conducting various administrative functions for the city government, such as koseki and juminhyo resident registration and tax collection. In some cities, ward offices are responsible for business licensing, construction permits and other administrative matters. The structure and authorities of the wards are determined by municipal ordinances.

The 23 special wards of Tokyo are not part of this system, as Tokyo is a prefecture and its wards are effectively independent cities. Although the two largest wards of Tokyo: Setagaya and Nerima, are populous enough to become designated cities, they are not considered to be "cities" within the meaning of the Local Autonomy Law and therefore cannot be designated.

No cities that have been designated by government ordinance have later lost this status.

Cities designated by government ordinance have been established since 1956.[1]

To become a candidate for designated city status, a city must satisfy the following condition:

Application for designation is made by a city with the approval of both the city and prefectural assemblies.

Cities that meet the requirements but have not yet been nominated

The following cities have populations greater than 500,000 but have not yet been nominated. (Cities planning to apply for core city status are not shown. ※Core Cities; ※※Special Cities)

The first form of the designated city system was enacted under Japan's first formalized local government system in 1878 with the introduction of "wards". Under this system, wards existed in every city: most cities had only one, but the largest cities at the time — Tokyo, Osaka and Kyoto — were divided into 15, 4 and 2 wards respectively.

The municipal system enacted in 1889 replaced ward assemblies with city assemblies, but retained ward assemblies in Tokyo, Osaka and Kyoto: in these cities, the city had no assembly of its own but was rather governed by the prefectural assembly. In 1898, these cities were allowed to form city assemblies. This ward system was adopted by three more cities prior to World War II: Nagoya (1908), Yokohama (1927) and Kobe (1931). Under a 1911 statute, wards were granted corporate personality and treated as local entities.

Following the war, the 1947 Local Autonomy Law grandfathered in the five subdivided cities (Tokyo having become a prefecture in 1943) as special cities (特別市, tokubetsu shi?). This system was replaced by the designated city system when the Local Autonomy Law was amended in 1956.

During the ensuing Japanese economic growth period, the government required designated cities to be forecast to reach a population of 1 million within the near future, but this requirement was dropped in 2005 in order to accommodate several geographically large cities formed by mergers under the Koizumi government.