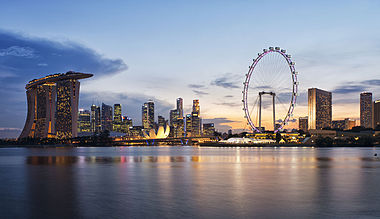 Singapore is a global city and an island city-state. 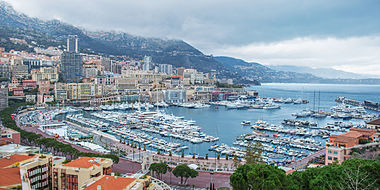 Monaco, known for its casino, royalty and scenic harbour. 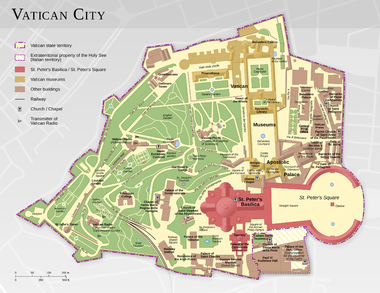 Vatican City, a city-state well known for being the smallest country in the world.

A city-state is a sovereign state that consists of a city and its dependent territories.[1][2] Historically, this included famous cities like Rome, Athens, Carthage,[2] and the Italian city-states during the Renaissance—but today only a handful of sovereign city-states exist, with some disagreement as to which are city-states. However, a great deal of consensus exists that the term properly applies to Singapore, Monaco, and Vatican City. In particular, Singapore has been referred to by The Economist as the "world's only fully-functioning city-state".[3]

A number of other states share similar characteristics, and therefore are sometimes also cited as modern city-states. These include Malta,[4][5][6][7] Bahrain,[8][9] and San Marino[8][10][11]and Andorra,[12] which are microstates with high population densities; as well as Qatar,[9][13] Brunei,[8] and Kuwait,[8][9][14] each characterised by a highly populated urban center comprising a significant proportion of the population. Notably however, all of them have a designated or 'de facto' capital city.

Additionally, several non-sovereign cities enjoy a high degree of autonomy, and are sometimes considered city-states. Hong Kong and Macau, along with independent members of the United Arab Emirates, most notably Dubai and Abu Dhabi, often are cited as such.[8][10][15]

Historical examples of city-states include the oldest known Sumerian cities of Uruk and Ur; Ancient Egyptian city-states, such as Thebes and Memphis; the Phoenician cities (such as Tyre and Sidon); the Berber city-states of the Garamantes; the city-states of ancient Greece (the poleis such as Athens, Sparta, Thebes, and Corinth); the Roman Republic (which grew from a city-state into a great power); the Mayan and other cultures of pre-Columbian Mesoamerica (including cities such as Chichen Itza, Tikal, Copan and Monte Albán); the central Asian cities along the Silk Road; the city-states of the Swahili coast; Venice; Ragusa; states of the medieval Russian lands such as Novgorod and Pskov; and many others. Scholars[which?] have classed the Viking colonial cities in medieval Ireland, most importantly Dublin, as genuine city-states.[16] 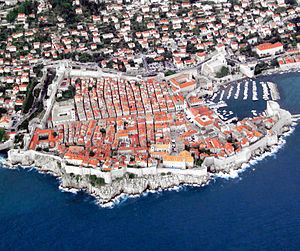 The Republic of Ragusa, a maritime city-state, was based in the walled city of Dubrovnik.

In Cyprus, the Phoenician settlement of Kition (in present-day Larnaca) was a city-state that existed from around 800 BC until the end of the 4th century BC.

Some of the most well-known examples of city-state culture in human history include the ancient Greek city-states and the merchant city-states of Renaissance Italy, which organised themselves in small independent centers. The success of small regional units coexisting as autonomous actors in loose geographical and cultural unity, as in Italy or Greece, often prevented their amalgamation into larger national units.[citation needed] However, such small political entities often survived only for short periods because they lacked the resources to defend themselves against incursions by larger states. Thus they inevitably gave way to larger organisations of society, including the empire and the nation-state.[17][need quotation to verify]

In the history of Mainland Southeast Asia, aristocratic groups, Buddhist leaders, and others organized settlements into autonomous or semi-autonomous city-states. These were referred to as mueang, and were usually related in a tributary relationship now described as mandala or as over-lapping sovereignty, in which smaller city-states paid tribute to larger ones that paid tribute to still larger ones—until reaching the apex in cities like Ayutthaya; Bagan; Bangkok and others that served as centers of Southeast Asian royalty. The system existed until the 19th century when colonization by European powers, and Thailand's (then known as Siam) resulted in the adoption of the modern concept of statehood.[18][19][20]

In the Holy Roman Empire the Free Imperial Cities enjoyed a considerable autonomy, buttressed legally by international law following the Peace of Westphalia (1648). Some, like the three Hanseatic cities of Bremen, Hamburg and Lübeck, pooled their economic relations with foreign powers and were able to wield considerable diplomatic clout. After the dissolution of the Holy Roman Empire in 1806, cities – then members of different confederacies – officially became sovereign city-states  – such as the Canton of Basel City (1833–48), the Free Hanseatic City of Bremen (1806–11 and again 1813–71), the Free City of Frankfurt upon Main (1815–66), the Canton of Geneva (1813–48), the Free and Hanseatic City of Hamburg (1806–11 and again 1814–71), the Free and Hanseatic City of Lübeck (1806–11 and again 1813–71), and the Free City of Krakow (1815-1846). Another city-state, though lacking sovereignty, was West Berlin (1948–1990), being a state legally not belonging to any other state, but ruled by the Western Allies. They allowed – notwithstanding their overlordship as occupant powers – its internal organisation as one state simultaneously being a city, officially called Berlin (West). Though West Berlin maintained close ties to the West German Federal Republic of Germany, it was legally never part of it.

The Free City of Danzig was a semi-autonomous city-state that existed between 1920 and 1939, consisting of the Baltic Sea port of Danzig (now Gdańsk, Poland) and nearly 200 towns in the surrounding areas. It was created on 15 November 1920[21][22] under the terms of Article 100 (Section XI of Part III) of the 1919 Treaty of Versailles after the end of World War I.

The Free State of Fiume was an independent free state between 1920 and 1924. Its territory of 28 km2 (11 sq mi) comprised the city of Fiume (now in Croatia and, since the end of World War II, known as Rijeka) and rural areas to its north, with a corridor to its west connecting it to Italy.

The Tangier International Zone was a 373 km2 (144 sq mi) international zone centered on the city of Tangier, North Africa under the joint administration of France, Spain, and Britain (later Portugal, Italy, Belgium, the Netherlands, Sweden, and the United States), attached to Morocco, then a French protectorate from 1923 until 29 October 1956 when it was reintegrated into Morocco.

The Klaipėda Region or Memel Territory was defined by the Treaty of Versailles in 1920 when it was put under the administration of the Council of Ambassadors. The Memel Territory was to remain under the control of the League of Nations until a future day when the people of the region would be allowed to vote on whether the land would return to Germany or not. The then predominantly ethnic German Memel Territory (Prussian Lithuanians and Memellanders constituted the other ethnic groups), situated between the river and the town of that name, was occupied by Lithuania in the Klaipėda Revolt of 1923.

The Free Territory of Trieste was an independent territory situated in Central Europe between northern Italy and Yugoslavia, facing the north part of the Adriatic Sea, under direct responsibility of the United Nations Security Council in the aftermath of World War II, from 1947 to 1954. The UN attempted to make the Free Territory of Trieste into a city state, but it never gained real independence and in 1954 its territory was divided between Italy and Yugoslavia.

Singapore is an island city-state in Southeast Asia. About 5.2 million people live and work within 700 square kilometres (270 sq mi), making Singapore the 2nd-most-densely populated country in the world after Monaco, another city-state. The entire island functions as a single metropolitan area. Singapore was part of Malaysia before it exited the federation in 1965, becoming an independent republic, a city and a sovereign country. The Economist refers to the nation as the "world’s only fully functioning city-state".[3]

Until 1870, the city of Rome had been controlled by the pope as part of his Papal States. When King Victor Emmanuel II seized the city in 1870, Pope Pius IX refused to recognize the newly formed Kingdom of Italy. Because he could not travel without effectively acknowledging the authority of the king, Pius IX and his successors each claimed to be a "Prisoner in the Vatican," unable to leave the 0.44 km2 (0.17 sq mi) papal enclave once they had ascended the papal thrones.

The impasse was resolved in 1929 by the Lateran Treaties negotiated by the Italian dictator Benito Mussolini between King Victor Emmanuel III and Pope Pius XI. Under this treaty, the Vatican was recognized as an independent state, with the Pope as its head. The Vatican City State has its own citizenship, diplomatic corps, flag, and postage stamps. With a population of less than 1,000 (mostly clergymen), it is by far the smallest sovereign country in the world.

Some cities or urban areas, while not sovereign states, may nevertheless enjoy such a high degree of autonomy that they function as "city-states" within the context of the sovereign state that they belong to. Historian Mogens Herman Hansen describes this aspect of self-government as: "The city-state is a self-governing, but not necessarily independent political unit."[8]