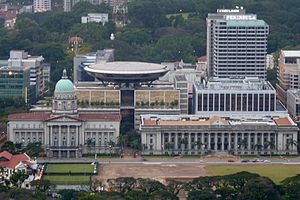 The City Hall (Chinese: 政府大厦; Malay: Dewan Bandaraya; Tamil: நகர மண்டபம்) in Singapore is a national monument gazetted on 14 February 1992. It can be found in front of historical Padang and adjacent to the Supreme Court of Singapore, it was designed and built by the architects of the municipal government, A. Gordans and F. D. Meadows from 1926 to 1929. A flight of stairs takes visitors from the Corinthian colonnade to the main building. The building was constructed to replace several houses designed by architect G.D. Coleman. It was first known as Municipal Building until 1951 when Singapore was granted city status by King George VI.

City Hall was built from 1926 to 1929 and was known as Principal Building. The building was built by G.D. Coleman in the 1830s. During the World War II, when the Japanese occupied Singapore, they managed the civic issues from the Municipal Building but political affairs were already being conducted in the building. In 1943, leader of the Indian National Army, Subhas Chandra Bose, rallied for the Japanese support to let India to be independent from the British rule at the Municipal Building. British prisoners-of-war were rounded up in front of the building for a march to POW camps at Changi Prison and Selarang. On 12 September 1945, the Japanese General Itagaki surrendered to Lord Mountbatten in 1945 to end World War II in Singapore. In 1951, it was renamed to its present name as it was to mark Singapore as a city, after being granted city status.

During self-government, then Prime Minister Lee Kuan Yew declared self-governance in Singapore in 1959, the playing of the new national anthem and the first time the people of Singapore saw the national flag as well as Singapore's independence from the Federation of Malaysia in 1965. In 1959, Lee and his eight cabinet minister were sworn into political office in the chamber of the City Hall before the first Yang di-Pertuan Negara, Yusof bin Ishak, whose oath was taken at the City Hall as well. Lee Kuan Yew read out the Malaysia Proclamation at the City Hall in 1963, and declared that Singapore was no longer under British rule. The people celebrated the first Malaysia Day at the Padang which is outside the City Hall. The first National Day Parade was held there in 1966 and subsequent years. The steps of the City Hall is use as a VIP seating area at National Day Parades held there.

Singapore has a unitary system of government. It has not had a mayor or a city council since the end of British rule. The ruling People's Action Party abolished the City Council and the Rural Board in 1959, and the role of the mayor disappeared. In place are the five Community Development Councils (namely Central Singapore, Northeast, Northwest, Southeast and Southwest), established in 1997. The CDCs are not elected bodies, rather each of them consists of 12 to 80 members appointed by the People's Association Chairman or Deputy Chairman. Each of the five CDCs is headed by a mayor.

In 1987, the building underwent a massive upgrade to allow the building to house governmental offices. In 1988, twelve courtrooms of the City Hall were transferred to the Supreme Court. This restoration work earned it a Good Effort Award in 1994 by the Urban Redevelopment Authority. The City Hall was later the place where Prime Minister Goh Chok Tong had his inauguration ceremony and the swearing-in of the cabinet. The building was used for many government events over the years, it was used as a venue for the Singapore Biennale, and also for the IMF and World Bank Meetings when it was held in Singapore as a registration centre.

In 2015, The City Hall, together with the adjacent Old Supreme Court Building, has been converted into the National Gallery Singapore.