City of Vicenza and the Palladian Villas of the Veneto 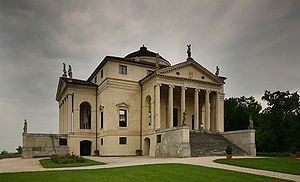 Villa Capra "La Rotonda" in Vicenza. One of Palladio's most influential designs 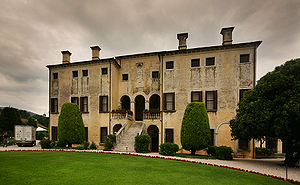 City of Vicenza and the Palladian Villas of the Veneto is a World Heritage Site in Italy, which protects buildings by the architect Andrea Palladio.

UNESCO inscribed the site on the World Heritage List in 1994.[1] At first the site was called "Vicenza, City of Palladio" and only buildings in the immediate area of Vicenza were included. Various types of buildings were represented in the original site, which included the Basilica Palladiana, Teatro Olimpico and palazzi in the city itself, along with a few villas in the vicinity. However, most of Palladio's surviving villas lay outside the site. In 1996 the site was expanded. Its present name reflects the fact that it includes all the Palladian Villas of the Veneto. City of Vicenza and the Palladian Villas of the Veneto also has some examples of ecclesiastical architecture, including the relatively small church at Maser.[2]

There is another important group of urban buildings by Palladio in Venice, a city which also has World Heritage Site status. Venice has notable examples of ecclesiastical architecture by Palladio, including the Church of San Giorgio Maggiore.