The City of Westminster (

i/ˈwɛstmɪnstər/) is an Inner London borough which occupies much of the central area of Greater London including most of the West End. It is to the west of and adjoining the ancient City of London, directly to the east of the Royal Borough of Kensington and Chelsea, and its southern boundary is the River Thames. It was created with the 1965 establishment of Greater London. Upon creation, Westminster was awarded city status, which had been previously held by the smaller Metropolitan Borough of Westminster.

Aside from a number of large parks and open spaces, the population density of the district is high. Many sites commonly associated with London are in the borough, including St. James's Palace, Buckingham Palace, the Houses of Parliament, and 10 Downing Street. The borough is divided into a number of localities including the ancient political district of Westminster around the Palace of Westminster; the shopping areas around Oxford Street, Regent Street, Piccadilly and Bond Street; and the night time entertainment district of Soho. Much of the borough is residential, and in 2008 it was estimated to have a population of 236,000. The local authority is Westminster City Council.

The Westminster coat of arms were given to the city by an official grant on September 2, 1964.[2]

Westminster had other arms before, which was identical to the chief in the present arms. The symbols in the lower two thirds of the shield stand for former municipalities now merged with the city, Paddington and St. Marylebone.[2]

The origins of the City of Westminster pre-date the Norman Conquest of England. In the mid-11th Century king Edward the Confessor began the construction of an abbey at Westminster, only the foundations of which survive today. Between the abbey and the river he built a palace, thereby guaranteeing that the seat of Government would be fixed at Westminster, and inevitably drawing power and wealth west out of the old City of London.[3]

For centuries Westminster and the City of London were geographically quite distinct. It was not until the sixteenth century that houses began to be built over the adjoining fields, eventually absorbing nearby villages such as Marylebone and Kensington, and gradually creating the vast Greater London that exists today. Westminster briefly became a city (in the sense of the seat of a bishop) in 1540 when Henry VIII created the short-lived Diocese of Westminster.

The present-day City of Westminster as an administrative entity with its present boundaries dates from 1965, when the City of Westminster was created from the former area of three metropolitan boroughs: St Marylebone, Paddington, and the smaller Metropolitan Borough of Westminster, which included Soho, Mayfair, St. James's, Strand, Westminster, Pimlico, Belgravia, and Hyde Park. This re-structuring took place under the London Government Act 1963, which significantly reduced the number of local government districts in London, resulting in local authorities responsible for larger geographical areas and greater populations.

The Westminster Metropolitan Borough was itself the result of an administrative amalgamation which took place in 1900. Sir John Hunt O.B.E was the First Town Clerk of the City of Westminster, 1900–1928.

The boundaries of the City of Westminster today, as well as those of the other London boroughs, have remained more or less unchanged since the Act of 1963.

A Lord Mayor is elected annually to serve as the official representative of the city for one year. See List of Lord Mayors of Westminster for a list of former Mayors (1900–1965) and Lord Mayors (1965 to date).

Main article: List of districts in the City of Westminster

The City of Westminster covers all or part of the following areas of London:

The City of Westminster is home to a large number of companies. Many leading global corporations have chosen to establish their global or European headquarters in the City of Westminster. Mayfair and St. James's within the City of Westminster also have a large concentration of hedge fund and private equity funds. The West End is known as the Theatre District and is home to many of the leading performing arts businesses. Soho and its adjoining areas house a concentration of media and creative companies. Oxford Street is one of the leading shopping destinations in the world.[citation needed] The list of companies includes 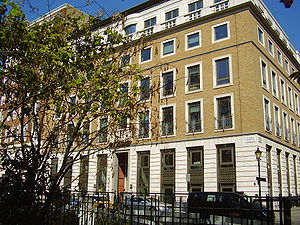 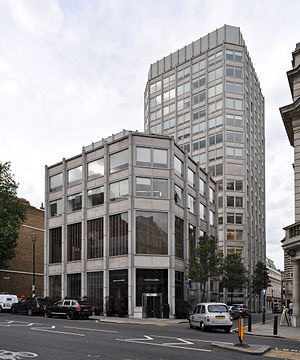 The Hong Kong Economic and Trade Office, London is in Westminster.[13][35] 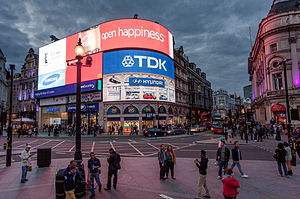 Piccadilly Circus
Main article: List of tourist attractions in Westminster
Further information: List of roads in the City of Westminster

The City of Westminster contains many of the most famous sites in London. Some of the popular tourist sites are Buckingham Palace, the Palace of Westminster (Houses of Parliament) which includes Big Ben, and nearby Westminster Abbey.

These include Green Park, Hyde Park, Kensington Gardens, Regent's Park and St. James's Park. In addition to parks and open spaces within the borough, the City owns and maintains East Finchley Cemetery and crematorium in the London Borough of Barnet. 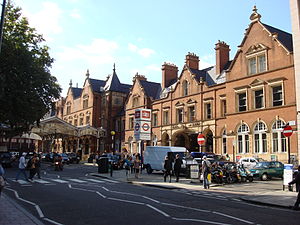 The City of Westminster is served by 27 tube stations, and 10 of the 11 London Underground lines (the Waterloo and City line is the exception).

Westminster City Council now has electric vehicle charging points in 15 locations through the city (13 car parks and two on-street points). Users pay an annual fee to cover administration costs to register and use the points.[48] 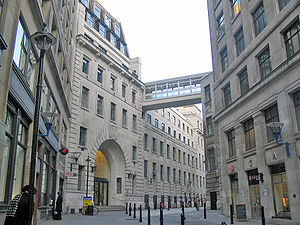 The main entrance to the London School of Economics
Main article: List of schools in the City of Westminster

Westminster Children's Services administers many primary and secondary schools. In addition, there are several state-funded faith schools, primarily Church of England (CE), and Roman Catholic (RC), but Christian non-denominational (ND) schools are also in the borough,[50] and there are several non-profit-making junior and senior independent schools. 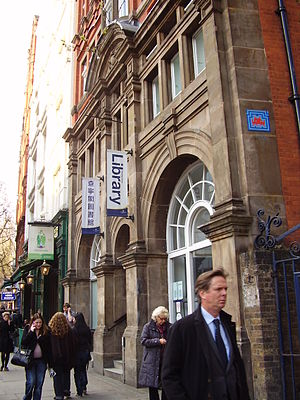 In terms of tenure, the borough ranks highest on one standard criteria in analysing housing supply and demand, the proportion of private rented accommodation relative to other types of housing in England. This is indicative of a high density of development and higher investment demand relative to other districts in England and most of the 15 highest-ranking local authorities are boroughs of Greater London. Tourism also increases the proportion of willing third-party landlords, as the two authorities which are outside London in the list are England's largest south coast holiday resorts.