Claire Conner McCaskill (/məˈkæskəl/; born July 24, 1953) is an American politician and member of the Democratic Party who serves as the senior United States Senator from Missouri. The first woman elected to the U.S. Senate from Missouri in her own right, she defeated Republican incumbent Jim Talent in the 2006 election, by a margin of 49.6% to 47.3%.[1] She became the state's senior U.S. Senator upon the retirement of Kit Bond in 2011[2] and won a bid for re-election in 2012, defeating Republican Todd Akin by a margin of 54.7% to 39.2%.[3][4]

Before her election to the U.S. Senate, McCaskill served as the State Auditor of Missouri from 1999 to 2007. She previously served as Jackson County Prosecutor from 1993 to 1998 and as a member of the Missouri House of Representatives from 1983 to 1989. She ran for Governor of Missouri in the 2004 election, beating Democratic incumbent Bob Holden in the primary election but losing to Republican Matt Blunt in a close general election. A native of Rolla, she graduated from the University of Missouri and studied at Georgetown University.

McCaskill was born in Rolla, Missouri. McCaskill's father, William Young McCaskill (1925–1993), served as a state Insurance Commissioner during the administration of Governor Warren E. Hearnes.[5] Her mother, Betty Anne (née Ward; 1928–2012), was the first woman elected to the City Council of Columbia, Missouri. Betty Anne McCaskill lost a race for a seat in the state House of Representatives to Leroy Blunt, the father of U.S. Senator Roy Blunt and grandfather of former Missouri Governor Matt Blunt.

Except for three years spent in private practice as an attorney at the firm of a Kansas City trial lawyer (1989 to 1991), McCaskill has worked in the public sector continuously since graduating from law school in 1978. McCaskill, following her graduation from law school, spent one year as a law clerk on the Missouri Court of Appeals for the Western District, which sits in Kansas City. Thereafter, McCaskill joined the Jackson County prosecutor's office where she specialized in arson cases.

In 1982, McCaskill was elected to represent the Brookside neighborhood of Kansas City in the Missouri House of Representatives. McCaskill left the State House to contemplate running for Jackson County Prosecutor in 1988, but did not pursue the position when fellow Democrat and incumbent Prosecutor Albert Riederer decided to seek another term.

In 1990, McCaskill was elected to the Jackson County Legislature (the equivalent of a county commission or county council). In 1991, McCaskill made a bold announcement when she expressed her intention to run for County Prosecutor. The announcement was significant in that the elected Democratic Prosecutor Riederer had not announced whether he was going to seek re-election. McCaskill went on to win election in 1992. McCaskill was the first woman to serve as Jackson County Prosecutor, and was re-elected in 1996.

In 1998, McCaskill was elected to the position of State Auditor, and was the second female to hold the post after her predecessor, Margaret B. Kelly. She was re-elected in a landslide in 2002.

On November 2, 2004, McCaskill lost to her Republican opponent, then-Secretary of State Matt Blunt in the general election by a margin of 51% to 48%. McCaskill's loss to Blunt was the first defeat in her twenty-year political career.[9] 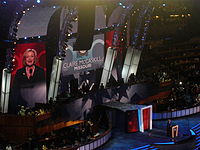 McCaskill speaks during the first night of the 2008 Democratic National Convention in Denver, Colorado.

Both Talent and McCaskill easily defeated their opponents in their respective primaries on August 8, 2006. McCaskill and Talent debated each other on Meet the Press on October 8, 2006.[10] On November 8, 2006, McCaskill defeated Talent by a margin of 49.6% to 47.3% with two minor-party candidates taking the remainder.

McCaskill was unopposed in the Democratic primary and faced Republican nominee Todd Akin in the general election. Until mid-August, polling showed McCaskill and Akin running neck and neck. Then, in a television interview on August 12, Akin claimed that women who were the victims of what he described as "legitimate rape" rarely experienced pregnancy from rape. His comments caused uproar and he was criticized by members of both parties. He faced calls to withdraw from the race but did not do so and McCaskill opened up increasing leads in opinion polls. Akin's comments caused a backlash amongst voters, particularly women,[11] and McCaskill was re-elected by 54.7% to his 39.2%.

McCaskill is the first elected woman to represent Missouri in the U.S. Senate. Jean Carnahan was appointed to the Senate following her husband's death and posthumous election, but was defeated in a close election by Jim Talent. McCaskill entered the U.S. Senate promising to raise the minimum wage and to work with her counterpart from Missouri, Republican Senator Kit Bond. 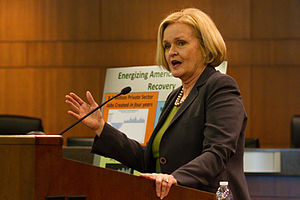 Since being elected to the Senate, McCaskill has consistently been named by the National Journal in its ideological rankings as one of the ten most moderate Senators.[12] In 2011, she was ranked exactly 50th on its scale of most-liberal to most-conservative.[13] The Washington Post reported in 2012 that she was the second-most-likely Democratic Senator to vote against her party.[12]

In January 2008, McCaskill decided to endorse Senator Barack Obama in his campaign for the Democratic nomination for the presidential elections of 2008, making her one of the first senators to do so. She was one of the most visible faces for his campaign[14] and her support was crucial to Obama's narrow victory in the Missouri primary in February 2008. She has credited her daughter Maddie as the one who made her publicly endorse Obama.[15] She was frequently mentioned as a possible vice presidential nominee for Obama, but was never seriously considered. She spoke on the opening day of the Democratic National Convention in August 2008.[16] 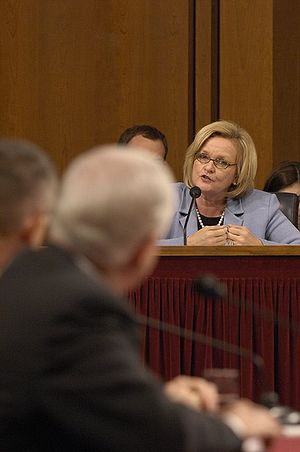 She introduced legislation with then-Senator Obama after the Walter Reed Army Medical Center neglect scandal erupted which demanded the full accountability of wounded veterans and agencies that would ensure physical and mental health conditions being addressed. "Those who have fought this war and felt its effects most personally, our servicemen and women, deserve to have a real researched plan for dealing with the aftermath of their sacrifice, so that the mistakes made by the administration in war planning are not repeated in planning for the readjustment needs of these heroes," McCaskill noted on the Senate floor after Obama made comments about the same issue. McCaskill also took Secretary of Veterans Affairs Jim Nicholson to task over the "irresponsibility" regarding overlooking the Department of Veterans Affairs.[17]

In the Senate Armed Services Committee, McCaskill has made herself known for being aggressive by questioning officials in the Department of Defense and their "loose" spending habits. McCaskill grilled top officials of the military's auditing agencies for rewarding KBR for their Logistics Civil Augmentation Program (LOGCAP) contract, a contract now valued at over $20 billion, despite audit reports indicating extreme contractor mismanagement and expansive overcharging of the U.S. government.[18] She has also been critical of DoD's auditors, the Defense Contract Audit Agency, based on a recent GAO report which alleges that audits were not properly supported or supervised, and in some cases been changed by managers in order to appease the procurement community and/or the audited contractor.[19]

On January 14, 2014, McCaskill introduced the Victims Protection Act of 2014 (S. 1917; 113th Congress) into the Senate.[22] The bill is intended to help protect the victims of sexual assault in the military.[23] The bill would allow victims to give a preferences as to whether they would prefer their cases take place in the military or in the civilian justice systems. It also applies these changes to the military academies.[22] The bill passed the Senate on March 10, 2014.

As a member of the Senate ad hoc subcommittee on disaster recovery, McCaskill supported Republican U.S. Representative Joseph Cao and fellow Democratic U.S. Senator Mary Landrieu in their insistence on corrections of mismanagement of the New Orleans office of the Federal Emergency Management Agency (FEMA).[24]

McCaskill voted for the Patient Protection and Affordable Care Act, popularly known as ObamaCare, in December 2009,[25] and she voted for the Health Care and Education Reconciliation Act of 2010.[26] She was critical of the Stupak–Pitts Amendment, which would have placed limits on private funding of abortions in the context of the November 2009 Affordable Health Care for America Act.[27]

On March 16, 2011, McCaskill told reporters that she was "embarrassed" about revelations that her office had used taxpayer money for the senator's use of a private airplane she co-owned with her husband and friends. According to a government audit, the plane was used for 90 flights taken between Washington, D.C., and her home in suburban St. Louis, as well as to numerous sites around the state of Missouri. According to McCaskill's Senate office, all but 1 of the 90 flights in question were within Senate rules. As soon as the story broke, Senator McCaskill sent a check for $88,000 to the U.S. Treasury as reimbursement for the flights.[28] The Missouri Republican Party filed a formal complaint with the Senate Ethics Committee on March 16. In response McCaskill said, “The Missouri Republican Party is going to try to ride this horse as long as they can. They’re going to try to make this as big a deal as they can. Them filing the ethics complaint is about as surprising as the sun coming up”.[29] On March 21, 2011, Politico reported that McCaskill had failed to pay more than $280,000 in property taxes on the plane and was planning to sell it. “I have convinced my husband to sell the damn plane”, McCaskill said on a conference call with reporters. “I will never set foot on the plane again”.[29] The Senate Ethics Committee has yet to comment on the matter.

The plane, a 2001 Pilatus PC-12, is stored at Spirit of St. Louis Airport, McCaskill confirmed. It is owned by Timesaver LLC, a Delaware-based corporation. McCaskill noted that she had paid $38,800 in sales taxes on the plane, and she only recently became aware that Missouri also imposed a property tax on private aircraft. She said she was “disappointed” in herself for not ensuring that Timesaver LLC paid the property taxes. “Frankly, having the plane owned in Delaware would not negate the necessity of paying the personal property tax in Missouri,” she said. “This is a mistake. It should have been reported in Missouri. It was owed in Missouri. It will be paid in Missouri today”.[29]

Senator McCaskill also served as the Chairwoman of the Select Committee for the Impeachment of Samuel B. Kent, which was disbanded July 22, 2009, after Judge Kent resigned.[31]

McCaskill was married to David Exposito, with whom she had three children. The couple divorced in 1995, after 11 years of marriage, while McCaskill was Jackson County Prosecutor. David Exposito was found murdered in Kansas City, Kansas on December 12, 2005.[33] Exposito's murder has never been solved.[34]

On the October 3, 2009 episode of NPR's Wait Wait... Don't Tell Me!, McCaskill spoke about a vacation early in her career as a lawyer, where she was a contestant on High Rollers. McCaskill would reign as champion for four days, and later sold several of her prizes to pay off her student loan debt.[35]

In April 2002, McCaskill married St. Louis businessman Joseph Shepard. Shepard lent $1.6 million to McCaskill's 2004 gubernatorial campaign and also had business interests in the nursing home industry. Because as state auditor McCaskill was responsible for auditing the Missouri Department of Health and Senior Services, which regulates the state's nursing home system, Shepard's financial interests in the industry became an issue during the 2004 gubernatorial campaign.[36]

McCaskill is a convert to Roman Catholicism.[38][not in citation given]