The Frasers are believed to have come from Anjou in France.[2] The name Fraser may be derived from Fredarius, Fresel or Freseau.[2] Another suggestion is that the Frasers were a tribe in Roman Gaul, whose badge was a strawberry plant (fraisier in French).[2] The first Fraser to appear in Scotland was in about 1160 when Simon Fraser held lands at Keith in East Lothian .[2] 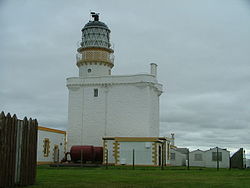 In 1592, Sir Alexander Fraser of Philorth received charters from James VI of Scotland for the fishing village of Faithlie which later became the town of Fraserburgh.[2] Sir Alexander Fraser was also authorized to found a university in the town but this scheme was short lived due to the religious troubles of the time.[2]

The eighth Lord Philorth built Fraserburgh Castle which later became the Kinnaird Head lighthouse.[2] This bankrupted him and Philorth Castle was lost from the family for over three hundred years until 1934 when it was bought back by the 19th Lord Saltoun.[2]

The ninth Laird of Philorth married the heiress of the Abernethy Lords Saltoun.[2] Their son became the tenth Lord Saltoun who was severely wounded at the Battle of Worcester in 1651.[2] He survived thanks to his servant, James Cardno, who rescued him from the battlefield.[2] In 1666 the tenth Lord built Philorth House a mile from Fraserburgh which remained the family seat until it burned down in 1915.[2]

Sir Alexander Fraser of Durris was personal physician to Charles II of England.[2] He was educated at Aberdeen and accompanied the king on his campaign throughout 1650.[2] After the Restoration he sat in the Scottish Parliament and he featured in the diaries of Samuel Pepys.[2]

The Fraser family took no part in the Jacobite risings,[2] although their distant Highland relatives in the Clan Fraser of Lovat were Jacobites.[2]

The sixteenth Lord Saltoun commanded the Light Companies of the First Guards at the Battle of Waterloo in 1815.[2] The nineteenth Lord Saltoun was a prisoner of war during World War I in Germany.[2] Later, in 1936 he became a member of the House of Lords and promoted the Royal National Lifeboat Institution.[2]