The Clan Hamilton also occasionally referred to as the House of Hamilton, is a Lowland Scottish clan.[1]

Origins of the house

The Hamilton chiefs descend from Walter fitz Gilbert of Hambledon who appears in a charter to the Monastery of Paisley in about 1294.[1] His lands appear to have originally been in Renfrewshire, however his support for Robert the Bruce rewarded him with lands in Lanarkshire and the Lothians[1] These lands included Cadzow, which later became the town of Hamilton, South Lanarkshire.[1]

Chief among the legends still clinging to this important family is that which gives a descent from the House of Beaumont, a branch of which is stated to have held the manor of Hamilton, Leicestershire; and it is argued that the three cinquefoils of the Hamilton shield bear some resemblance to the single cinquefoils of the Beaumonts. In face of this it has been recently shown that the single cinquefoil was also borne by the Umfravilles of Northumberland, who appear to have owned a place called Hamilton in that county. It may be pointed out that Simon de Montfort, the great earl of Leicester, in whose veins flowed the blood of the Beaumonts, obtained about 1245 the wardship of Gilbert de Umfraville, second earl of Angus, and it is conceivable that this name Gilbert may somehow be responsible for the legend of the Beaumont descent, seeing that the first authentic ancestor of the Hamiltons is one Walter FitzGilbert. He first appears in 1294–1295 as one of the witnesses to a charter by James, the high steward of Scotland, to the monks of Paisley; and in 1296 his name appears in the Homage Roll as Walter FitzGilbert of "Hameldone." Who this Gilbert of "Hameldone" may have been is uncertain.

As already mentioned Walter Fitz Gilbert was rewarded with lands for his support of king Robert the Bruce.[1] Walter's son, David, fought at the Battle of Neville's Cross for David II of Scotland in 1346.[1] David was captured and was not released until a substantial ransom was paid.[1]

In 1474 James Hamilton, 1st Lord Hamilton married Princess Mary, daughter of James III of Scotland.[1] Their son was James Hamilton, 1st Earl of Arran.[1] The family extended Brodick Castle on the Isle of Arran.[1] The second Earl of Arran, James Hamilton, Duke of Châtellerault was heir to the throne of both James IV of Scotland and Mary, Queen of Scots.[1] He was made regent of Scotland while the queen was still a child and proposed to marry his son to her, in order to secure his claim to the throne.[1] However the marriage did not take place and Mary married an heir to the French throne instead.[1] James Hamilton was created Duke of Châtellerault because he had figured prominently in the marriage negotiations with France.[1] In 1561 he was sent into exile for five years because he openly opposed Mary's marriage to Henry Stuart, Lord Darnley, having had his hopes rekindled when Mary's marriage ended upon the death of the Dauphin of France.[1]

James Hamilton of Bothwellhaugh was a Scottish supporter of Mary, Queen of Scots, who assassinated James Stewart, 1st Earl of Moray, Regent of Scotland, in January 1570.[3]

The 4th Earl of Arran, James Hamilton, 2nd Marquess of Hamilton became Lord Chancellor of Scotland and was made keeper of both of the strategic royal castles; Edinburgh Castle and Stirling Castle.[1] He had been advanced to the rank of Marquess in 1599.[1] His brother was Claud Hamilton, 1st Lord Paisley who had been created Lord Paisley in 1587 and later Lord Abercorn.[1] This branch of the family also prospered and Abercorn was advanced to an earldom and later a dukedom in 1868.[1] 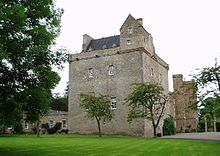 The third Marquess, James Hamilton, 1st Duke of Hamilton was a staunch supporter of Charles I.[1] Charles rewarded him with the dukedom in 1643, which made Hamilton the premier peer in Scotland.[1] Hamilton led a royalist army into England but was defeated at the Battle of Preston (1648) by the Parliamentarians of Oliver Cromwell.[1] Hamilton was later executed in 1649 at Whitehall shortly before the king met the same fate.[1] Hamilton's brother, William Hamilton, 2nd Duke of Hamilton was also a brave soldier but was killed at the Battle of Worcester in 1651.[1] The title passed to Anne Hamilton, 3rd Duchess of Hamilton, daughter of the first Duke.[1] She was a woman of great intellect but she inherited estates heavily burdened by debt.[1] Matters were made worse with her kinsman Hamilton, Earl of Abercorn, challenged her right to succeed to the title.[1] Anne married William Douglas, 1st Earl of Selkirk (later Duke of Hamilton).[1] Their son was James Hamilton, 4th Duke of Hamilton who was killed in a duel in London in 1712.[1]

Seat of the chief

Hamilton Palace in Hamilton, South Lanarkshire, had been the family's seat from 1695. Built by Duchess Anne, and her husband William Douglas, 3rd Duke of Hamilton, it had the distinction of being the largest non-royal residence in Europe, reaching its greatest extent under the 10th and the 11th dukes in the mid nineteenth century.

Excessive subsidence of the palace caused by the family's mines led to its condemnation and demolition in 1921.[1] The 13th Duke then moved to Dungavel House, near Strathaven. This was where deputy-führer Rudolf Hess aimed to reach during his doomed peace mission to see the Douglas, 14th Duke of Hamilton in 1941.

In 1947, Dungavel was sold to the coal board, and then on to the government, who turned it into an open prison. Currently, it is the site of a controversial holding centre for asylum-seekers.

The family moved to Lennoxlove House in East Lothian, which remains the residence of the current Duke.[1]