Clan Keith is a Scottish clan, whose chief historically held the hereditary title of Great Marischal of Scotland.[1]

The placename Keith comes from a Cumbric form of the Modern Welsh coed ("wood").[2]

A warrior of the Chatti tribe is said to have killed the Danish General, Camus, at the Battle of Barrie in 1010.[1] For this valour Malcolm II of Scotland dipped three fingers into the blood of the dead and drew them down the warrior's shield.[1] The warrior was thereafter named Marbhachair Chamuis which meant the Camus Slayer.[1] The chief of the Clan Keith has borne the same three lines on his shield ever since.[1] It can be found as early as 1316 on the seal of Sir Robert de Keith.[1]

King Malcolm's victory at the Battle of Carham in 1018 brought him into possession of Lothian and the lands of Keith in Lothian were subsequently held by the Camus Slayer.[1] It is from these lands that his progeny took their name.[1]

A Norman adventurer named Hervey married the native heiress of Marbhachair and in about 1150 David I of Scotland granted her a charter for the lands of Keith.[1] In a charter of 1176 their son was styled as Marischal of the King of Scots.[1] The Marischal was charged with the safety of the king's person within Parliament and was also custodian of the royal regalia.[1]

In 1308 Robert the Bruce granted the royal Halforest of Aberdeenshire to his friend, Robert de Keith.[1] Here the Marischal built his castle.[1] His nephew was William Keith of Galston who returned Bruce's heart to Melrose Abbey after the death of the Sir James Douglas at the Battle of Teba in Andalucia.[1] Bruce confirmed to the family the hereditary office of marischal by a charter of 1324 and Sir Robert de Keith had commanded the Scottish cavalry at the Battle of Bannockburn.[1] The office was held upon the condition that they bore the ancient arms that they had inherited from Marbhachair Chamuis.[1]

Sir Robert Keith, the Marishchal escorted the young David II of Scotland when he fled to France to escape the usurpation Edward Balliol.[1]

Sir William Keith the Marischal who died in 1407 married the heiress of Sir Alexander Fraser and in doing so added great estates in Buchan, Kincardine and Lothian to his existing patrimony.[1] William's brother, John Keith, married the Cheyne heiress which brought the Keiths massive estates in Inverugie as well as Inverugie Castle, which later became the seat of the clan chiefs.[1] Three of Sir William Keith's children married children of Robert II of Scotland, while another daughter married Sir Adam Gordon, ancestor of the Earls of Huntly.[1]

In 1458 the third Lord Keith was made Earl Marischal and was the only peer to be styled by his office of state.[1] 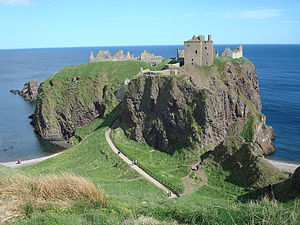 The ruins of Dunnottar Castle, a seat of the chiefs of Clan Keith

After Charles II of England was crowned in 1651, William Keith, 7th Earl Marischal was captured and imprisoned in the Tower of London.[1] He remained there until the Restoration when the king appointed him a Privy Councillor and later Lord Privy Seal as recompense for what he and his family had suffered in the royal cause.[1] After Charles's coronation the Scottish crown jewels had been hidden on the Keith lands and as a result Marishcal's brother, John Keith, was created Knight Marischal and Earl of Kintore.[1]

George Keith, 8th Earl Marischal was appointed a Knight of the Thistle by James Francis Edward Stuart (the Old Pretender).[1] During the Jacobite rising of 1745 the Clan Keith supported the Jacobite cause.[1] As a result George Keith, 10th Earl Marischal along with his brother, James, forfeited their lands, castles and titles.[1] However the two Keith brothers played a part in Continental affairs during the 18th century with the earl being one of the very few Jacobite Knights of the Garter.[1] He also received the highest order in Prussia, the Black Eagle.[1] While his brother, James, was given Russia's Imperial Order of St Andrew.[1]

In 1801 the Lord Lyon King of Arms recognised Keith of Ravelston and Dunnotter as representer of the Marischal Keiths and his nephew was dubbed Knight Marischal in 1822 for George IV's visit to Edinburgh that year.[1]

The 9th Earl of Kintore was flamboyant and decimated the Kintore estates.[1] However Ian Keith, 12th Earl of Kintore promoted the clan internationally and appointed a Seanchaí to preserve their history and traditions.[1]

The current Chief of Clan Keith is James William Falconer Keith, 14th Earl of Kintore (b. 1976).