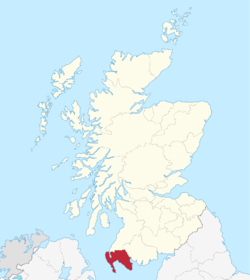 Clan Macdowall is a Scottish clan.[3]

The name Macdowall is from the district of Galloway which itself was named after the Galli or Gaelic settlers of the seventh and eight centuries.[3] There are many legends surrounding the foundation of the princedom of Galloway and even historian Alexander Nisbet narrated that Dovall of Galloway killed Nothatus the Tyrant in 230 BC.[3] The royal house of Galloway is said to have also resisted the Romans and Nesbit also stated that it was because of these early deeds that the lords included a fierce lion on their shield with a royal crown.[3]

The Lords of Galloway were powerful and scattered their princedom with abbeys and priories.[3] Fergus of Galloway flourished in the reign of David I of Scotland and he divided his princedom between his sons.[3] One of his sons or grandsons was Dougal.[3] The last native Lord of Galloway was Alan who died in about 1234.[3] Alan's daughter was Devorgilla who married Balliol, Lord of Barnard Castle.[3] Their son was John who claimed Galloway through his mother.[3] In 1295 Balliol as Lord of Galloway granted a charter of the lands of Garthland to Dougal.[3] In 1296 both Dougall and Fergus M'douall appear on the Ragman Rolls swearing fealty to Edward I of England.[3]

Dougal's grandson was Fergus, third of Garthland who during the reign of David II of Scotland was sheriff depute for Kirkcudbright.[3] His grandson was Sir Fergus Macdowall, the fifth Laird who in 1401 was taken prisoner at the Battle of Homildon by the English.[3]

Uchtred, the ninth of Garthland married Isobel Gordon of the branch of the Clan Gordon who controlled Lochinver.[3] However he and his son Thomas were both killed at the Battle of Flodden in 1513 along with James IV of Scotland.[3] John the eleventh Laird was also killed fighting the English at the Battle of Pinkie Cleugh in 1547.[3][4]

John had passed his estates to his son, another Uchtred, before going to war.[3] This Uchtred was implicated in the Raid of Ruthven when the Earl of Gowrie and other Protestant nobles kidnapped the young James VI of Scotland in 1582 and held him at Ruthven Castle and later Edinburgh Castle.[3] Uchtred was later pardoned in 1584 for his involvement in the conspiracy and received a fresh charter from the king for the barony of Garthland and Corswall.[3]

James Macdowall and William Macdowall were the sixteenth and seventeenth Lairds respectively.[3] During the seventeenth century, they were members of Parliament for Wigtownshire.[3] William and his wife, Grizel Beaton, had fourteen children. Their grandson, James Macdowall, became Lord Provost of Glasgow.[3]

The twenty-first Macdowall Laird was an advocate at the Scottish Bar and was elected to Parliament. From 1783 to his death in 1810, he served in the House of Commons at Westminster.[3] He was succeeded by his nephew, William, who sold the clan lands of Garthland but transferred the name to his estate at Lochwinnoch, Renfrewshire.[3] He and his brother died unmarried and the title passed to Lieutenant General Day Macdowall.[3] At the end of the nineteenth century, the chiefly family of Macdowall emigrated to Canada.[3]

Lesser-status MacDowalls were among those who were recruited by the English for plantations in Ireland in the early 18th century and many settled there.

Today, Fergus MacDowall of Garthland is the Chief of the Name and Arms.

Branches of the clan

The main branches of the clan include :[7]