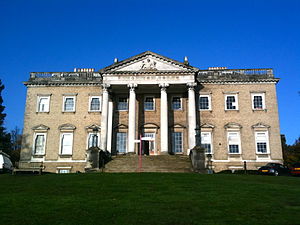 Claremont, also known historically as 'Clermont', is an 18th-century Palladian mansion less than a mile south of the centre of Esher in Surrey, England. The buildings are now occupied by Claremont Fan Court School, and its landscaped gardens are owned and managed by the National Trust. Claremont House is a Grade I listed building.[1]

The first house on the Claremont estate was built in 1708 by Sir John Vanbrugh, the Restoration playwright and architect of Blenheim Palace and Castle Howard, for his own use. This "very small box", as he described it, stood on the level ground in front of the present mansion. At the same time, he built the stables and the walled gardens, also probably White Cottage, which is now the Sixth Form Centre of Claremont Fan Court School.

In 1714 he sold the house to the wealthy Whig politician Thomas Pelham-Holles, Earl of Clare, who later became Duke of Newcastle and served twice as Prime Minister. The earl commissioned Vanbrugh to add two great wings to the house and to build a fortress-like turret on an adjoining knoll. From this so-called "prospect-house", or Belvedere, he and his guests could admire the views of the Surrey countryside as they took refreshments and played hazard, a popular dice game.

In the clear eighteenth-century air it was apparently possible to see Windsor Castle and St Paul's Cathedral. The Earl of Clare named his country seat Clare-mount, later contracted to Claremont. The two lodges at the Copsem Lane entrance were added at this time.

Claremont landscape garden is one of the earliest surviving gardens of its kind of landscape design, the English Landscape Garden — still featuring its original 18th century layout. The extensive landscaped grounds of Claremont represents the work of some of the best known landscape gardeners, Charles Bridgeman, Capability Brown, William Kent (with Thomas Greening) and Sir John Vanbrugh.[2]

Work on the gardens began around 1715, and by 1727 they were described as "the noblest of any in Europe". Within the grounds, overlooking the lake, is an unusual turfed amphitheatre.

A feature in the grounds is the Belvedere Tower, designed by Vanbrugh for the Duke of Newcastle. The tower is unusual in that what appear to be windows, are actually bricks painted black and white. It is now owned by Claremont Fan Court School, which is situated alongside the gardens.

In 1949 the landscape garden was donated to the National Trust for stewardship and protection. A restoration programme was launched in 1975 following a significant donation by the Slater Foundation.

When the Duke of Newcastle died in 1768, his widow sold the estate to Robert Clive, founder of Britain's Indian Empire. Although the great house was then little more than fifty years old, it was aesthetically and politically out of fashion. Lord Clive decided to demolish the house and commissioned Lancelot "Capability" Brown to build the present Palladian mansion on higher and dryer ground. Brown, more accomplished as a landscape designer than architect, took on his future son-in-law Henry Holland as a junior partner owing to the scale of the project. John Soane, later Sir John Soane, was employed in Holland's office at this time and worked on the project as a draftsman and junior designer.[3] Holland's interiors for Claremont owe much to the contemporary work of Robert Adam.

A large map now situated in "Clive's room" of the mansion is entitled "Claremont Palace"; the map shows the mansion and the surrounding grounds, giving a detailed overview of the campus. The map probably dates back to the 1860s when the mansion was frequently occupied by Queen Victoria, thus it being christened a palace; however, the exact date is still unknown.

Clive, by now a fabulously rich nabob, is reputed to have spent over £100,000 on rebuilding the house and a complete remodelling of the celebrated pleasure grounds. However, Clive never lived here, as he died in 1774—the year that the house was finished. The estate then passed through a rapid succession of owners, being first sold 'for not more than one third of what the house and alterations had cost',[4] to Viscount Galway, then to the Earl of Tyrconnel and finally to Charles Rose Ellis.

In 1816 Claremont was bought by the British Nation by an Act of Parliament as a wedding present for George IV's daughter Princess Charlotte and her husband Prince Leopold of Saxe-Coburg. At that time the estate was valued to Parliament at 60,000 pounds: "Mr Huskisson stated that it had been agreed to purchase the house and demesnes of Clermont... The valuation of the farms, farm-houses, and park, including 350 acres of land, was 36,000/; the mansion, 19,000/; and the furniture, 6,000/; making together 60,000/. The mansion, which is in good repair, could not be built now for less than 91,000/."[5] To the nation's great sorrow, however, Princess Charlotte, who was second in line to the throne, was, after two miscarriages, to die there after giving birth to a stillborn son in November the following year. Although Leopold retained ownership of Claremont until his death in 1865, he left the house in 1831 when he became the first King of the Belgians. 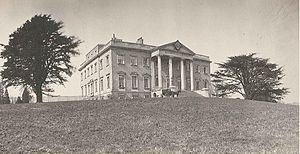 Queen Victoria was a frequent visitor to Claremont both as a child and later as an adult when Leopold, her doting uncle, lent her the house. She, in turn, lent the house to the exiled French king and queen Louis-Philippe and Marie-Amelie (the parents-in-law of Leopold I of Belgium) after the revolution of 1848.

In 1870, Queen Victoria commissioned Francis John Williamson to sculpt a marble memorial to Charlotte and Leopold which was erected inside the house.[6][7] (The memorial was subsequently moved to St George's Church, Esher.)[7]

Victoria bought Claremont for her fourth and youngest son Prince Leopold, Duke of Albany, when he married Princess Helena of Waldeck and Pyrmont in 1882. The Duke and Duchess of Albany had two children—Alice and Charles. In 1900, the latter became the Duke of Saxe-Coburg and a German citizen.

Claremont should have passed to the Duke of Saxe-Coburg on his mother's death in 1922, but because he had served as a German general in the First World War, the British government disallowed the inheritance. Claremont was accordingly confiscated and sold by the Public Trustee to shipping magnate Sir William Corry, director of the Cunard Line. Two years after Sir William's death in 1926, it was bought by Eugen Spier, a wealthy German financier. In 1930 the Mansion stood empty and was marked for demolition when it was bought, together with the Belvedere, the stables and 30 acres (120,000 m2) of parkland, by the Governors of a south London school, later renamed Claremont School and since 1978 known as Claremont Fan Court School.

The National Trust acquired 50 acres (0.20 km2) of the Claremont estate in 1949. In 1975, with a grant from the Slater Foundation, it set about restoring the eighteenth-century landscape garden. Now the Claremont Landscape Garden displays the successive contributions of the great landscape gardeners who worked on it: Sir John Vanbrugh, Charles Bridgeman, William Kent and Capability Brown.

In 1996 the school celebrated the National Trust's centenary by opening a feature of the grounds which had not previously been accessible to the garden's visitors: the 281-year-old Belvedere Tower.