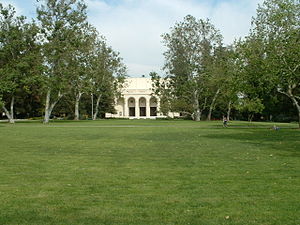 The Claremont Colleges are an American consortium of five undergraduate and two graduate schools of higher education located in Claremont, California, a city 35 miles (56 km) east of downtown Los Angeles and 25 miles (40 km) west of downtown San Bernardino. Unlike most other collegiate consortia, such as the Five Colleges Consortium in Massachusetts and the Tri-College Consortium in Pennsylvania, the Claremont College campuses are adjoining and within walking distance of one another. Put together, the campuses cover roughly 1 square mile (2.6 km2).

Known colloquially to students as the 7Cs—or the 5Cs, when referring only to the undergraduate institutions—the Claremont Colleges were founded in 1925 when the all-graduate Claremont University College (now Claremont Graduate University) was established in addition to the older all-undergraduate Pomona College. The purpose of the consortium is to provide the specialization, flexibility and personal attention commonly found in a small college, with the resources of a large university.[1] Their compartmentalized collegiate university design was inspired by Oxford University and Cambridge University. With more than 6,300 students, about 700 faculty, and approximately 1,600 staff and support, the colleges offer more than 2,000 courses to students. The Claremont Colleges are a unique consortium that the Fiske Guide called "a collection of intellectual resources unmatched in America".[2][3]

The five undergraduate colleges are:

The five undergraduate Claremont Colleges are commonly referred to as the "5Cs", while "7Cs" is used to refer to all the colleges, including the two graduate institutions. In mid-2008, the Consortium began talks with the National University of Singapore to build a sixth undergraduate Claremont College, off-site, in Singapore. However, as of October 2009, the Singapore Ministry of Education has put off funding plans.[4] The partnership would have been the first of its kind for a liberal arts college.

The two graduate universities are:

The Claremont School of Theology (founded 1885) (and thus Claremont Lincoln University) is affiliated with the consortium, but is not a member.

According to the American Liberal Arts College rankings released by U.S. News & World Report in fall 2013, the "5Cs" were ranked among the top 40 liberal art colleges in the United States: Pomona College (#4), Claremont McKenna College (#9), Harvey Mudd College (#18), Scripps College (#25), and Pitzer College (#35). Additionally, all of the undergraduate colleges are categorized as "Most Selective".[5] U.S. News & World Report also releases individual graduate program rankings for the Claremont Graduate University, with several of its programs ranking in the top tier of graduate programs nationwide.[6]

Each college is independent in that, for example, students receive their degrees from the one college in which they are enrolled, and administration and admissions departments are independent. However, large or expensive facilities and programs are shared. The seven-institution Claremont Colleges system is supported by the Claremont University Consortium. CUC provides centralized services, such as a library, student health, campus mail, financial and human resource, telecommunications, risk management, real estate, physical plant maintenance, and other services, for those colleges.

Shared facilities include the Libraries of the Claremont Colleges, Campus Safety, the Tranquada Student Services Center (which houses Baxter Medical Center, Monsour Counseling Center, and the Health Education Outreach), McAlister Center (home of the Office of the Chaplains and the Claremont Card Center), Huntley Bookstore, all dining facilities and several sports facilities. The Claremont Colleges Library is an example of the level of cooperation in terms of support services. The library collection ranks third among the private institutions in California, behind only Stanford and USC, and it is clearly larger than any one of the schools could afford to own on its own.[7] 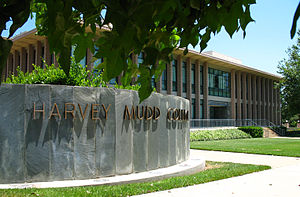 KSPC 88.7 FM is the non-profit community radio station associated with the Claremont Colleges. Students from the colleges host KSPC shows and help run the station.

The Robert Day School at Claremont McKenna College is open to students from all five undergraduate colleges.

In October 1923, President James A. Blaisdell of Pomona College wrote to Ellen Browning Scripps describing a vision of educational excellence he had for the future Claremont Colleges:

I cannot but believe that we shall need here in the South [of California] a suburban educational institution of the range of Stanford. My own very deep hope is that instead of one great undifferentiated university, we might have a group of institutions divided into small colleges — somewhat on the Oxford type — around a library and other utilities which they would use in common. In this way I should hope to preserve the inestimable personal values of the small college while securing the facilities of the great university. Such a development would be a new and wonderful contribution to American education. Now the thing which would assure this future institution to Southern California is land... It is now or never. To save the needed land for educational use seems to me to guarantee to Southern California one of the great educational institutions of America. Other hands through the centuries will carry on the project and perfect it. But never again can there come so fundamental a service as this.[8][9]

Athletics teams from Claremont McKenna College, Harvey Mudd College and Scripps College compete as one team. Male athletic teams are called the Stags, and women's teams are called the Athenas.[10] The teams (including Claremont-Mudd-Scripps men's basketball) participate in the NCAA's Division III and in the Southern California Intercollegiate Athletic Conference (SCIAC). Pomona College and Pitzer College compete together in the SCIAC. Their team is called the Sagehens.[11]