The three classes were established by Article I, Section 3, Clause 2 of the U.S. Constitution. The actual division was originally performed by the Senate in May 1789 by lot, with a rule being that a state's two seats had to be in different classes.[1] Whenever a new state subsequently joined the union, its two senate seats were permanently assigned to two different classes by coin toss, while keeping the three classes as close to the same size as possible.[2]

A senator's description as junior or senior senator is not related to his or her class. Rather, a state's senior U.S. senator is the one with the greater seniority in the Senate. This is mostly based on length of service.

When the Founding Fathers agreed to give six-year terms to senators, they also decided to stagger the elections, so that a third of the Senate was up for election every two years. With this staggered turnover, the Founding Fathers wanted to ensure stability in the Senate, and encourage senators to deliberate measures over time, rather than risk a rapid turnover of the entire chamber every six years. At the same time, they wanted more frequent elections, as opposed to waiting every six years, to prevent senators from permanently combining for "sinister purposes".[1]

The three classes of the Senate were then specified by Article I, Section 3 of the U. S. Constitution:

This was achieved in May 1789, several weeks after the first Senate assembled. Only 20 senators from 10 states were present; North Carolina and Rhode Island had not yet ratified the U.S. Constitution, and New York, because of its late ratification, had not yet selected its senators.[3] To decide on how to implement the division into classes, on May 11 the Senate appointed a committee consisting of Senators Ellsworth, Carroll, and Few.[4] In accordance with their recommendation, on May 14 the Senate divided the members into three classes:[5]

Thursday, May 14, 1789. The committee appointed to consider and report a mode of carrying into effect the provision in the second clause of the third section of the first article of the Constitution, reported:

Whereupon, Resolved, That the Senators be divided into three classes:

That three papers of an equal size, numbered 1, 2, and 3, be, by the Secretary, rolled up and put into a box, and drawn by Mr. Langdon, Mr. Wingate, and Mr. Dalton, in behalf of the respective classes in which each of them are placed; and that the classes shall vacate their seats in the Senate according to the order of numbers drawn for them, beginning with number one: And that, when Senators shall take their seats from States that have not yet appointed Senators, they shall be placed by lot in the foregoing classes, but in such manner as shall keep the classes as nearly equal as may be in numbers.

On the following day, May 15, the term expiration of each class was determined by drawing lots.[5]

The Senate proceeded to determine the classes, agreeably to the resolve of yesterday, on the mode of carrying into effect the provision of the second clause of the third section of the first article of the constitution, and the numbers being drawn, the classes were determined as follows:

Lot No. 1, drawn by Mr. Dalton, contained Mr. Dalton, Mr. Ellsworth, Mr. Elmer, Mr. Maclay, Mr. Read, Mr. Carroll, and Mr. Grayson, whose seats shall, accordingly, be vacated in the Senate, at the expiration of the second year.

Lot No. 2, drawn by Mr. Wingate, contained Mr. Wingate, Mr. Strong, Mr. Paterson, Mr. Bassett, Mr. Lee, Mr. Butler, and Mr. Few, whose seats shall, accordingly be vacated in the Senate, at the expiration of the fourth year.

Lot No. 3, drawn by Mr. Langdon, contained Mr. Langdon, Mr. Johnson, Mr. Morris, Mr. Henry, Mr. Izard, and Mr. Gunn, whose seats shall, accordingly, be vacated in the Senate, at the expiration of the sixth year.

Upon the expiration of a senator's term of any length, someone starts a new six-year term as senator (based on election by the state legislatures until the Seventeenth Amendment required direct popular election of senators).

Because each state is represented by two senators, regardless of population, each Senate class collectively represents a different number of people than each other Senate class. Since the early 19th century, class 2 senators have cumulatively represented between 50-60% of the population of the United States, while senators from each of the other two classes have cumulatively represented approximately 70-75% of the population of the United States.[6] (Because each state has two senators, the sum total of these figures is 200%, not 100%.) Several currently large states, including California, New York, Florida, and Ohio, all have their senators in classes 1 and 3, helping to create this imbalance. 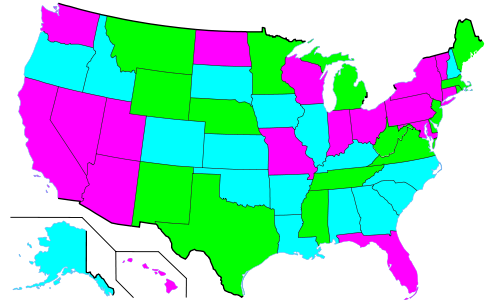 Map shows the classes in each U.S. State:

When a new state is admitted to the Union, its two senators have terms that correspond to those of two different classes, among the three classes defined below. Which two classes is determined by a scheme that keeps the three classes as close to the same size as possible; one that avoids the largest class differing by more than one senator from the smallest class.[2] A coin toss determines which new senator enters which of the classes selected to be expanded.[2]

This means at least one of any new state's first pair of senators has a term of less than six years, and one term is either two or four years shorter than the other.

When the last state, Hawaii, was admitted in 1959, candidates for the Senate ran either for "seat A" or "seat B." The new senators, in a process managed by the Secretary of the Senate, drew lots to determine which of the two would join the class 1 (whose term would end in five-and-a-half years), and which would join class 3 (whose term would end in three-and-a-half years).[7][8]

Should a 51st state be admitted, it would receive senators in classes 1 and 2, at which point all three classes would have 34 senators.[2]

The following table lists the senators by party by class.

The following table lists the senators by state and by class, including the states' Cook Partisan Voting Index ratings, which indicate the party direction in which a state tends to lean and the extent of that lean.