From Infogalactic: the planetary knowledge core
Jump to: navigation, search
For other uses, see Classic.

The Classic is a bus developed by General Motors Diesel from its previous-generation New Look design. The "Classic" was nearly identical to the New Look from the belt rail up, but sported a new front which allowed for a wider front door. The design was originally intended solely for the Canadian market as an alternative to the unpopular RTS but ultimately the Classic, produced from 1982 to 1997, met with widespread success in both Canada and the United States. It was available primarily as a 40-foot (12.19 m) long, 102-inch (2.59 m) wide coach, although 16 60-foot (18.29 m) long articulated Classics were manufactured. The design was fairly conservative, yet contemporary and less controversial than the RTS.

When GMC in the United States decided to replace the New Look with the RTS II series in 1977, they hoped that they would win over operators in both the US and Canada. But the design and the futuristic look turned off most Canadian transit operators. In 1979, GM Canada's Transit division decided to continue producing New Looks until 1982, when it unveiled the Classic. Several orders for New Looks were still accepted, built and delivered until 1986 for U.S. properties, although the buses were made in Canada.

The Classic proved to be a popular in the U.S. as well, where the Utah Transit Authority would be the first American operator, in 1984, to order the buses, which was later followed by orders from DDOT (Detroit), Grand Rapids, Connecticut Transit, Big Blue Bus (Santa Monica), and the contract bus operators serving the New York City metropolitan area (the single-door Classics that was used for commuter routes).

In 1987 GM sold the transit bus division to MCI and TMC. By 1993 the bus division changed hands again, this time going to NovaBus. During the two transitions the Classics continued to be built until NovaBus ceased production on the coaches in 1997, as most agencies were preferring the new low-floor LFS model. The last Classics were built in 1997, for the Société de transport de l'Outaouais (STO) of Gatineau, Quebec; the RTS model was discontinued at the same time, leaving the LFS and its derivatives as the only models produced by NovaBus.

NovaBus also assembled Classics in the US in 1995 and 1996 from its now-closed plant in New York state. They were delivered to Buffalo, Connecticut, Rochester, the suburbs of Chicago (Pace), and Pittsburgh, which was the last US transit agency to acquire Classics. These agencies are slowly retiring the American units, but some have been refurbished and rebuilt by third-party distributors.

As of 2015, notable Classics from NYC, Montreal, Toronto, Connecticut, Calgary, Winnipeg and Santa Monica have been preserved by local non-profit bus groups.[1]

All of the 16 articulated buses were scrapped and destroyed upon their retirement, but some parts from the Halifax Transit fleet were saved to be used on their remaining and refurbished Classics.[2][3]

The model designations used for Classics consisted of two letters followed by a series of five numbers then another letter. The only versions built were the TC40-102A, TC40-102N and the TA60-102N. All were equipped with an automatic transmission. (Some TC40-102As without center doors have been erroneously identified as SC40-102As, but a true Suburban version would have had a lowered center aisle and underfloor baggage compartments.) 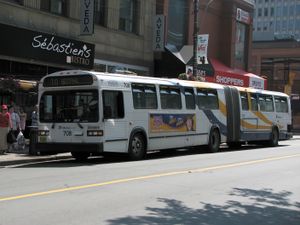 The 60-foot version was not introduced until 1992, after MCI took over production of the Classic design, and only 16 of these articulated buses were ever built (14 for Halifax Transit (Nova Scotia)), and two to Réseau de transport de la Capitale (RTC) (Quebec City, Quebec). NovaBus discontinued the 60-foot articulated version when it took over production from MCI in 1993. This bus is not to be confused with the New Look TA60-102N, a 60-foot articulated version of the New Look manufactured by GMC in 1982, which had the body of a New Look but the front end of a Classic, which allowed for a wider front entrance.

Seating capacity ranged from 39 to 52, and included wheelchair lifts which were optional for Canadian operators but was a requirement for American operators, which had to comply with the Americans with Disabilities Act of 1990.

There were many optional feature in the Classics, among them were the rear exit doors. Most orders were the wide-door versions, but a narrow single-stream door was also available. In addition, a majority opted to either have rear windows or none at all, with a few opting for a smaller rear window that was placed at the top part of the rear area. The US-built models saw the window portion phased out all together due to newly equipped air conditioning and a stand-out spoiler exhaust features that expanded the top part by a few inches. Another modification during its run was the size of the front destination sign window. A taller and wider version was offered from 1990 as more transit systems specified larger electronic destination signs. The major exception was Montreal, as MCI and NovaBus built an "M-version"—for Montreal—which retained the narrow destination sign windows, and was ordered primarily by properties in the Montreal area.

In its 15 years of production, a 35-foot long or a 96-inch wide version of the Classic was never made. However, GM, MCI and NovaBus did build a commuter version with all forward-facing seats and without a rear exit.