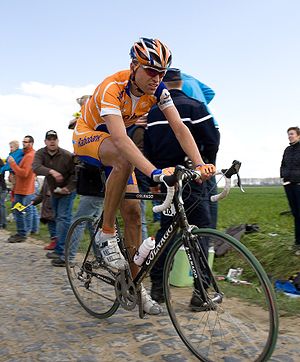 Joost Posthuma rides the 2008 Paris-Roubaix, one of the classic cycle races.

The classic cycle races are one-day professional cycling road races in the international calendar.[citation needed] Most of the events, all run in western Europe, have been fixtures on the professional calendar for decades and the oldest ones date back to the 19th century. They are normally held at roughly the same time each year. The five most revered races are often described as the 'Monuments'.

For the 2005 to 2007 seasons, the Classics formed part of the UCI ProTour run by the Union Cycliste Internationale. This event series also included various stage races including the Tour de France, Giro d'Italia, Vuelta a España, Paris–Nice and the Critérium du Dauphiné Libéré, and various non-Classic one-day events. The ProTour replaced the UCI Road World Cup series which contained only one-day races. Many of the Classics, and all the Grand Tours, were not part of the ProTour for the 2008 season because of disputes between the UCI and the ASO, which organizes the Tour de France and several other major races.

Although cycling fans and sports media eagerly use the term "classic", there is no clear consensus about what constitutes a classic cycling race. UCI, the international governing body of cycling, has no mention at all of the term in its rulings. This poses problems to define the characteristics of these races and makes it impossible to make precise lists. Several criteria are used to denote the importance of a cycling race: date of creation, historical importance and tradition, commercial importance, location, level of difficulty, level of competition field, etc. However, many of these paradigms tend to shift over time and are often opinions of a personal nature. One of the few objective criteria is the official categorization of races as classified by the UCI, although this is not a defining feature either, as many fans dispute the presence of some of the highest-categorized races and some older races are not included in the UCI World Tour.

Because of the growing ambiguity and inflation of the term "classic", the much younger term "monument" was introduced in the 21st century to denote the five most revered of the classic cycling races.

Given the lack of a clear definition of classic races, these are professional races mostly regarded as classics. It includes all of the one-day events of the UCI World Tour and additional races of historical importance.

Together, Milan–San Remo, the Cobbled classics and the Ardennes classics make up the "Spring Classics", all held in March and April.

Season openers are usually not regarded as highly as other classics, but receive a lot of attention because of their position early in the season, typically in February.

Some Classics have disappeared, often because of financial problems.[1] These include:

The five Monuments are generally considered to be the oldest, hardest and most prestigious one-day events in cycling.[4][5][6] They each have a long history and specific individual characteristics. They are currently the one-day races in which most points can be earned in the UCI World Tour (100 pts for the winner).

Except for the Tour of Flanders, the 'Monuments' currently have no women's events. A women's version of Milan–San Remo, named Primavera Rosa, was initiated in 1999, but cancelled after 2005.[7]

Only three riders have won all five Monument races during their careers: Rik Van Looy, Eddy Merckx and Roger De Vlaeminck, all three Belgians, and only Eddy Merckx won each of them more than once. Five riders won four of the Monuments. With victories in all the other Monuments, Seán Kelly almost joined the top group, finishing second in the Tour of Flanders on three occasions (1984, 1986 and 1987). Dutch rider Hennie Kuiper won each Monument, except Liège–Bastogne–Liège in which he finished second in 1980. Frenchman Louison Bobet, also won all but Liège–Bastogne–Liège. Belgian rider Fred De Bruyne also came close, finishing second in the Giro di Lombardia in 1955 and winning the other four races during his career. Germain Derycke also won four races, all except the Giro di Lombardia. Twenty riders have won at least five Monuments in their career.

Riders in blue are still active. Number of wins in gold indicates the current record holder(s).

Most wins in a single year

Only Eddy Merckx has been able to win three 'Monuments' in a single year - and he did it four times: