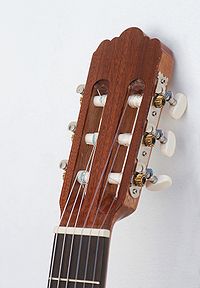 Since the development of nylon guitar strings by Albert Augustine Ltd., the three treble strings are a single nylon filament, while the three bass strings are made of a core of fine nylon threadlike filaments wound with silver-plated bronze or copper wire.

Up until the Second World War animal gut and silk were the materials from which guitar strings were manufactured. Albert Augustine, an instrument maker from New York, USA, was the first to produce guitar strings with nylon. According to Rose Augustine,[1] his wife, he was unable to secure source materials due to the war restrictions and happened upon nylon line in an army surplus store in Greenwich Village. When initially approached by him the DuPont company, who manufactured the material, were unconvinced that guitarists would accept nylon's sonic characteristics. Augustine staged a blind test with company representatives from DuPont, they happened to choose nylon over gut as having the best "guitar sound". The DuPont company then supported Augustine's initiative. Augustine classical guitar strings were first commercially manufactured in 1948, in conjunction with Olinto Mari, President of E.& O. Mari/La Bella Strings at their factory in Long Island City New York. When Andrés Segovia, the great Spanish guitar virtuoso, discovered Augustine's strings he was an immediate convert[citation needed].

Fluorocarbon polymers have recently become an alternative to nylon treble strings. The sound is preferred by some luthiers and players, especially for the smooth transition provided by the G string from treble to bass.[2]