A classical guitar with additional strings is a nylon-string or gut-string classical guitar with more than six strings, in which the additional strings pass over a fingerboard so that they may be "stopped" or fretted with the fingers. These are also known as extended-range guitars, and should not be confused with harp guitars (in which the added strings do not pass over a fingerboard; see below).

While the invention of the seven-string guitar has sometimes been attributed to Russian guitarist and composer Andrei Sychra, guitar historian Matanya Ophee has found evidence that seven-string classical guitars may have already existed in Europe in the late 18th century, when Sychra was just beginning his career.[1] 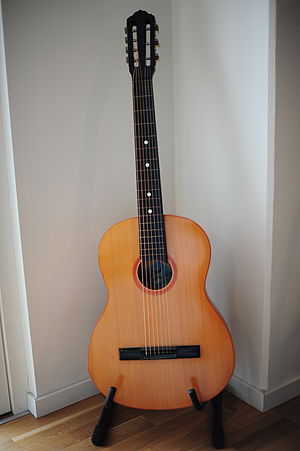 There is no question, however, that Sychra was a great proponent of the seven-string instrument, having written a method, and more than one thousand compositions for the instrument. Seventy-five of these pieces were republished in the 1840s by Stellovsky, then again in the 1880s by Gutheil. Some of these were published again in the Soviet Union in 1926.

Sychra's guitar was a nylon-string "classical" variation of the traditional Russian Gypsy Guitar (now usually steel-strung), and tuned in a similar manner, to an open 'G' chord:

The modern seven-string classical guitar is usually tuned the same as the modern standard six-string instrument, with the addition of a low 'B' strring:

As with any guitar, many tuning variations are possible, and not uncommon.

Eight-string classical guitars are generally tuned with two extra basses ([BD]EADGBE) that vary in pitch depending on the piece being played. Another common variation is to add an extra bass and treble string. The extra treble is almost always tuned to A, while the added bass string usually falls on A,B, or C.

Paul Galbraith and Alexander Vynograd are two of the most notable 8 string players who use the extra high and low string tuning. Galbraith generally tunes (B)EADGBEA which puts standard 6 string guitar chord voicings and scale shapes within the neck and allows him to read lute tablature directly (a whole step higher). Vynograd chooses to tune AEADGCEA (notice the b string is tuned up a half step) which allows him to play the top 6 strings like a guitar a 4th higher. Vynograd writes his music on a grand staff in a different key and plays as if the guitar was tuned EBEADGBE.

The Brahms guitar was developed by guitarist Paul Galbraith and luthier David Rubio to allow the music of Brahms to be played more comfortably on the guitar. Information: 8 string guitar

Includes the Decacorde - a historical romantic guitar - which was tuned C2-D2-E2-F2-G2-A2-D3-G4-B4-E4 and the modern 10-string guitar, which has various tunings.

The Yepes 10-string guitar adds four strings (resonators) tuned in such a way that they (along with the other three bass strings) can resonate in sympathy with any of the 12 chromatic notes (or their primary harmonics) that can occur on the higher strings; the idea behind this being an attempt at enhancing and balancing sonority.

The tuning of the Yepes ten-string guitar is:

For more details on this topic, see eleven-string alto guitar.

The eleven-string alto guitar was developed by Swedish luthier Georg Bolin in the 1960s, and Bolin altgitarren (Swedish for the alto guitar, plural altgitarrer) are now rare and valuable. The Bolin alto guitar most often has eleven strings, but a thirteen-string version also exists.

The eleven-string alto guitar is played by guitarists such as John Francis, Stefan Östersjö and Göran Söllscher and is often used in performances of Bach on the guitar.

The Godin Glissentar is another type of eleven-string guitar and is fretless.

The 11-string archguitar built by American luthier Walter Stanul is played by guitarists such as Peter Blanchette [1].

The 13-string "Chiavi-Miolin" guitar is played by Anders Miolin and created by Swiss luthier Ermanno Chiavi.

Luthier Michael Thames has developed the 13-string "Dresden" designed to function as a baroque lute for guitarists.

The harp guitar is a guitar with added strings which are "floating", and are only played as open strings. As with extended-range guitars, these additional strings may be lower or higher in pitch than the standard strings. Unlike extended-range instruments, the extra strings on harp guitars may only be played as open strings, or employed as sympathetic resonators for the other strings., because they do not pass over a fingerboard, and cannot be "stopped" or fretted.[3]