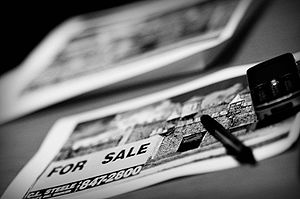 Classified ads in a newspaper.

Classified advertising is a form of advertising which is particularly common in newspapers, online and other periodicals which may be sold or distributed free of charge. Advertisements in a newspaper are typically short, as they are charged for by the line, and are one newspaper column wide.

Publications printing news or other information often have sections of classified advertisements; there are also publications that contain only advertisements. The advertisements are grouped into categories or classes such as "for sale—telephones", "wanted—kitchen appliances", and "services—plumbing", hence the term "classified".

In recent years the term "classified advertising" or "classified ads" has expanded from merely the sense of print advertisements in periodicals to include similar types of advertising on computer services, radio, and even television, particularly cable television but occasionally broadcast television as well, with the latter occurring typically very early in the morning hours.[citation needed]

Like most forms of printed media, the classified ad has found its way to the Internet.

Internet classified ads do not typically use per-line pricing models, so they tend to be longer. They are also searchable, unlike printed material, tend to be local,[citation needed] and may foster a greater sense of urgency as a result of their daily structure and wider scope for audiences. Because of their self-regulatory nature and low cost structures, some companies offer free classifieds internationally. Other companies focus mainly on their local hometown region, while others blanket urban areas by using postal codes. Craigslist.org was one of the first online classified sites, and has grown to become the largest classified source, bringing in over 14 million unique visitors a month according to comScore Media Metrix.[citation needed] A growing number of sites and companies have begun to provide specialized classified marketplaces online, catering to niche market products and services, such include boats, pianos, pets, and adult services, amongst others. In many cases, these specialized services provide better and more targeted search capabilities than general search engines or general classified services can provide.[citation needed]

A number of online services called aggregators crawl and aggregate classifieds from sources such as blogs and RSS feeds, as opposed to relying on manually submitted listings.

Additionally, other companies provide online advertising services and tools to assist members in designing online ads using professional ad templates and then automatically distributing the finished ads to the various online ad directories as part of their service. In this sense these companies act as both an application service provider and a content delivery platform. Social classifieds is a growing niche.[citation needed]

Newspaper's revenue from classifieds advertisements is decreasing continually as internet classifieds grow. Classified advertising at some of the larger newspaper chains dropped by 14% to 20% in 2007, while traffic to classified sites grew by 23%.[1]

As the online classified advertising sector develops, there is an increasing emphasis toward specialization. Vertical markets for classifieds are developing quickly along with the general marketplace for classifieds websites. Like search engines, classified websites are often specialized, with sites providing advertising platforms for niche markets of buyers or sellers.