From Infogalactic: the planetary knowledge core
Jump to: navigation, search
For other uses, see Dornier (disambiguation). 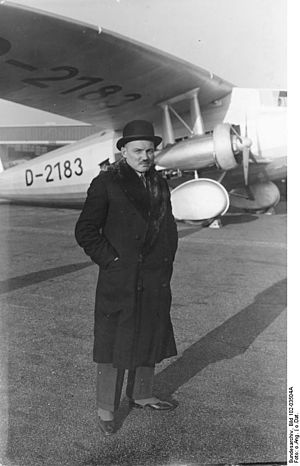 Claude (Claudius) Honoré Desiré Dornier born in Kempten im Allgäu (May 14, 1884 - December 5, 1969) was a German airplane builder and founder of Dornier GmbH. His legacy remains in the aircraft named after him, including the 12-engine Dornier Do X flying boat, for decades the world's largest and most powerful airplane.

The son of a French wine importer and his German wife, Claude Dornier was born in Bavaria where he grew up and attended school, with science being his chief interest. Dornier then moved to Munich, where he graduated in 1907 from the Technical University.

As a young engineer Dornier first worked on strength calculations at Nagel Engineering Works in Karlsruhe. In 1910, he joined Luftschiffbau Zeppelin in Friedrichshafen on the Bodensee, where his advanced abilities quickly attracted Count Ferdinand von Zeppelin's attention. Soon appointed as the Count's personal scientific advisor, Dornier began fundamental research and design on improving the strength of light metal sections and later on aircraft engineering and giant metal flying boats[1] and was responsible for the development of the first stressed skin all-metal monocoque aircraft designs, including the Zeppelin-Lindau D.I, which was the first such aircraft to enter production.[2]

Dornier is also recognised in the history of German aviation for his unique concepts in multiple aircraft engine installations. His aircraft often used paired propellers on the front and the back of the engine nacelles in a push-pull configuration.

Dornier received the Ludwig-Prandtl-Ring from the Deutsche Gesellschaft für Luft- und Raumfahrt (German Society for Aeronautics and Astronautics) for "outstanding contribution in the field of aerospace engineering" in 1959.