His parents were French, his father being a career officer who was killed in the First World War. He grew up with his mother and her family in Perpignan in the middle of the wine district of Roussillon. Among his ancestors was a general from the time of the French Revolution.

After secondary school at Collège Stanislas in Paris and brief sojourns at Oxford and Cambridge he took courses in painting at the André Lhote Academy. He then travelled extensively through Spain, Germany, the Soviet Union, Italy and Greece. This experience as well as those from the Second World War show up in his literary work. At the beginning of the war Claude Simon took part in the battle of the Meuse (1940) and was taken prisoner. He managed to escape and joined the resistance movement. At the same time he completed his first novel, Le Tricheur ("The Cheat", published in 1946), which he had started to write before the war.

He lived in Paris and used to spend part of the year at Salses in the Pyrenees.

In 1961 Claude Simon received the prize of L'Express for La Route des Flandres and in 1967 the Médicis prize for Histoire. The University of East Anglia made him honorary doctor in 1973.

Simon is often identified with the nouveau roman movement exemplified in the works of Alain Robbe-Grillet and Michel Butor, and while his fragmented narratives certainly contain some of the formal disruption characteristic of that movement (in particular Histoire , 1967, Triptyque, 1973), he nevertheless retains a strong sense of narrative and character.[1]

In fact, Simon arguably has much more in common with his Modernist predecessors than with his contemporaries; in particular, the works of Marcel Proust and William Faulkner are a clear influence. Simon's use of self-consciously long sentences (often stretching across many pages and with parentheses sometimes interrupting a clause which is only completed pages later) can be seen to reference Proust's own style, and Simon moreover makes use of certain Proustian settings (in La Route des Flandres, for example, the narrator's captain de Reixach is shot by a sniper concealed behind a hawthorn hedge or haie d'aubépines, a reference to the meeting between Gilberte and the narrator across a hawthorn hedge in Proust's A la recherche du temps perdu).

The Faulknerian influence is evident in the novels' extensive use of a fractured timeline with frequent and potentially disorienting analepsis (moments of chronological discontinuity), and of an extreme form of free indirect speech in which narrative voices (often unidentified) and streams of consciousness bleed into the words of the narrator. The ghost of Faulkner looms particularly large in 1989's L'Acacia, which uses a number of non-sequential calendar dates covering a wide chronological period in lieu of chapter headings, a device borrowed from Faulkner's The Sound and the Fury.

Despite these influences, Simon's work is thematically and stylistically highly original. War is a constant and central theme (indeed it is present in one form or another in almost all of Simon's published works), and Simon often contrasts various individuals' experiences of different historical conflicts in a single novel; World War I and the Second World War in L'Acacia (which also takes into account the impact of war on the widows of soldiers), the French Revolutionary Wars and the Second World War in Les Géorgiques.

In addition, many of the novels deal with the notion of family history, those myths and legends which are passed down through generations and which conspire in Simon's work to affect the protagonists' lives. In this regard, the novels make use of a number of leitmotifs which recur in different combinations between novels (a technique also employed by Marguerite Duras), in particular the suicide of an eighteenth-century ancestor and the death of a contemporary relative by sniper-fire. Finally, almost all of Simon's novels feature horses; Simon was himself an accomplished equestrian, and fought in a mounted regiment during WWII (the ridiculousness of mounted soldiers fighting in a mechanised war is a major theme of La Route des Flandres and Les Géorgiques).

Simon's principal obsession, however, is with the ways in which humans experience time (another Modernist fascination). The novels often dwell on images of old-age, such as the decaying 'LSM' or the old woman (that 'flaccid and ectoplasmic Cassandra') in Les Géorgiques, which are frequently seen through the uncomprehending eyes of childhood. Simon's use of family history equally attempts to show how individuals exist in history—that is, how they might feel implicated in the lives and stories of their ancestors who died long ago. 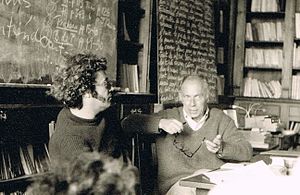 Essayist Christopher Hitchens criticised Simon's deconstruction of George Orwell's account of the Spanish Civil War, claiming that Simon had himself fought "on the side of the Stalintern forces." In a further reference to the literary honours bestowed on Simon, Hitchens added: "the award of the Nobel Prize to such a shady literary enterprise is a minor scandal, reflecting the intellectual rot which had been spread by pseudo intellectuals."[4]