In the Fall of 1860, George Hayes, who was running for Representative from Cherokee County, promised his southeastern constituents to introduce legislation to form a new county. In February 1861 the legislation was introduced and passed by the North Carolina General Assembly.[3]

Clay County was formed primarily from Cherokee County, North Carolina, however a small area was taken from Macon County, North Carolina. In honor of Mr. Hayes, the then new county's seat was appointed Hayesville and the newly formed county was named in honor Henry Clay, famous American statesman, member of the United States Senate from Kentucky.[3]

Despite having been created in 1861, Clay County lacked an organized, formal government until 1868. Later that year, the first post office opened in Hayesville and the first county courthouse was built in 1888, currently it is listed on the National Register of Historic Places.[4]

Throughout the rest of the nineteenth and early twentieth centuries, Clay County has remained largely agricultural.[3]

Clay County is bordered to the south by the state of Georgia and the Chattahoochee National Forest. The Nantahala River forms part of its northeastern border. The county is drained by the Hiwassee River. In the southern part of Clay County is Chatuge Lake, on the North Carolina–Georgia border. Much of Clay County exists within the Nantahala National Forest. Fires Creek Bear Reserve is north of the township of Tusquittee.

The eastern portion of the county is preserved as part of the Nantahala National Forest.

Clay County has a humid subtropical climate, (Cfa) according to the Köppen classification, with hot, humid summers and mild, but occasionally cold winters by the standards of the southern United States.[6]

Like the rest of the southeastern U.S., Clay County receives abundant rainfall, which is relatively evenly distributed throughout the year. Average annual rainfall is 55.9 inches (1,420 mm). Blizzards are rare but possible; one nicknamed the 1993 Storm of the Century hit the entire Eastern United States in March, 1993.

The county government is a constitutional body and is granted specific powers by the Constitution of North Carolina. Clay County is a member of the regional Southwestern Commission council of governments. 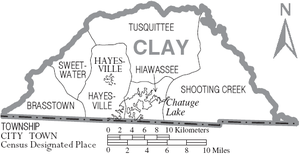 The county is divided into six townships: Brasstown comprises the westernmost township, Hayesville is centrally located and home to the county seat, Hiawassee is the smallest and surrounds Lake Chatuge, Shooting Creek is the easternmost township, Sweetwater is a small township northwest of Hayesville Township, and Tusquittee, one of the larger townships and most northern.