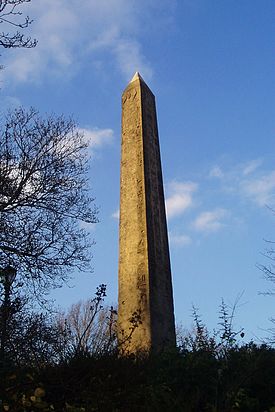 Cleopatra's Needle is the popular name for each of three Ancient Egyptian obelisks re-erected in London, Paris, and New York City during the nineteenth century. The obelisks in London and New York are a pair, and the one in Paris is also part of a pair originally from a different site in Luxor, where its twin remains. Although all three needles are genuine Ancient Egyptian obelisks, their shared nickname is a misnomer, as they have no connection with the Ptolemaic Queen Cleopatra VII of Egypt, and were already over a thousand years old in her lifetime. The London and New York "needles" were originally made during the reign of 18th Dynasty Pharaoh Thutmose III. The Paris "needle" dates to the reign of 19th Dynasty Pharaoh Ramesses II and was the first to be moved and re-erected. The New York "needle," was the first to acquire the nickname, "L'aiguille de Cléopâtre" in French,[1] where it stood in Alexandria.

The London needle is in the City of Westminster, on the Victoria Embankment near the Golden Jubilee Bridges.

It was originally erected in the Egyptian city of Heliopolis on the orders of Thutmose III, around 1450 BC. It remained in Alexandria until October 1877 when its transport to London was funded by William James Erasmus Wilson.

The New York City needle was erected in Central Park (at Lua error in Module:Coordinates at line 668: callParserFunction: function "#coordinates" was not found., just west of the Metropolitan Museum of Art) on 22 February 1881. It was secured in May 1877 by judge Elbert E. Farman, the then-United States Consul General at Cairo, as a gift from the Khedive for the United States remaining a friendly neutral as the European powers – France and Britain – maneuvered to secure political control of the Egyptian Government.

The Paris Needle ("L'aiguille de Cléopâtre") is in the Place de la Concorde. The centre of the Place is occupied by the giant Egyptian obelisk decorated with hieroglyphs exalting the reign of the pharaoh Ramesses II. Along with its twin (still in situ), it once marked the entrance to the Luxor Temple. The ruler of Egypt and Sudan, Muhammad Ali, presented the 3,300-year-old Luxor Obelisk to France in 1826. King Louis-Philippe had it placed in the centre of Place de la Concorde in 1833 near the spot where Louis XVI and Marie Antoinette had been guillotined in 1793. Given the technical limitations of the day, transporting it was difficult – on the pedestal are diagrams explaining the machinery used for its transportation. The red granite column rises 23 metres high, including the base, and weighs over 250 tonnes. Missing its original cap, believed stolen in the 6th century BC, in 1998 the government of France added a goldleafed pyramid cap to the top of the obelisk. The obelisk is flanked by two fountains constructed at the time of its erection on the Place.