The Cleveland Barons were a professional ice hockey team in the National Hockey League (NHL) from 1976 to 1978. They were a relocation of the California Golden Seals franchise, which had played in Oakland since 1967. After only two seasons, the team merged with the Minnesota North Stars (now the Dallas Stars). As a result the NHL fielded only 17 teams during the 1978–79 season.

As of 2015, the Barons remain the last franchise in the four major North American sports leagues to cease operations. Ohio would not have another NHL team until the Columbus Blue Jackets joined the league in 2000. 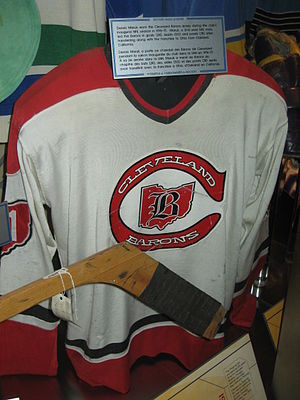 After new arena plans in San Francisco were cancelled, the NHL dropped its objection to a relocation of the troubled California Golden Seals franchise from Oakland. Minority owner George Gund III persuaded majority owner Melvin Swig to move the team to his hometown of Cleveland for the 1976–77 season. The team was named "Barons" after the successful team, in the American Hockey League (AHL), that played in the city from 1929 to 1973. The AHL Barons' owner moved that team to Florida in favour of his Cleveland Crusaders team in the brand new World Hockey Association (WHA). Although a successful minor league city, Cleveland had been turned down for an NHL expansion team on three previous occasions.

The Barons played in the suburban Richfield Coliseum in Richfield, Ohio, an arena originally built for the WHA’s Crusaders (which had become the Minnesota Fighting Saints for the 1976-77 WHA season) and the NBA’s Cleveland Cavaliers. The Richfield Coliseum had the then-largest seating capacity in the NHL, at 18,544.

The NHL approved the move to Cleveland on July 14, 1976, but details were not finalized until late August, and there was little time or money for promotion of the new team. The Barons would never come close to filling the arena in their two years in Cleveland. The team’s home opener on October 7, 1976, only drew 8,900 fans. They only drew 10,000 or more fans in seven out of 40 home games, and attendance was actually worse than it had been in Oakland.

The Barons were also troubled by an unfavorable lease with the Coliseum, and in January 1977 Swig hinted the team might not finish the season because of payroll difficulties. The Barons actually missed payroll twice in a row in February, and with the franchise on the verge of collapse, some of the Barons’ players were actively being courted by other teams. Wanting to avoid the embarrassment of a team folding at mid-season (as had previously happened in the rival WHA), the league and the NHLPA made a last-minute $1.3 million loan to allow the Barons to finish the season. After the team finished last in the Adams Division yet again, Swig sold his interest to Gund and his brother Gordon.

For 1977–78, the Gunds poured money into the team, and it seemed to make a difference at first. The Barons stunned the defending Stanley Cup champion Montreal Canadiens on November 23 before a boisterous crowd of 12,859. After a brief slump, general manager Harry Howell pulled off several trades in an attempt to make the team tougher. It initially paid off, and the Barons knocked off three of the NHL’s top teams, the Toronto Maple Leafs, New York Islanders and Buffalo Sabres in consecutive games in January 1978. A few weeks later, a record crowd of 13,110 saw the Barons tie the Philadelphia Flyers 2–2. The bottom fell out in February, however, as a 15-game losing skid knocked the Barons out of playoff contention.

After the season, the Gunds tried to buy the Coliseum, but failed. Meanwhile, the Minnesota North Stars were facing financial difficulties similar to those weighing down the Barons. Fearing that two franchises were on the verge of folding, on June 14, 1978 the league granted approval for the two teams to merge. While the North Stars were the surviving team, the Gunds were the majority owners and the North Stars assumed the Barons’ place in the Adams Division, with the North Stars later moving to the Norris Division in the 1981 realignment. In 1991, the Gunds were chosen as inaugural owners of the new San Jose Sharks expansion franchise, selling their North Stars shares to a new ownership group. The NHL arranged a special Dispersal and Expansion Draft, which allowed the Sharks to take 16 North Stars players in a dispersal draft, with both teams then allowed to choose players in an expansion draft.

The dispersal to San Jose had the effect of reversing the original Barons/North Stars merger, with the Sharks occupying the same market as the Golden Seals did prior to their move to Cleveland. The new North Stars owners moved their team to Dallas as the Dallas Stars in 1993. The Gunds later moved an existing American Hockey League team to Cleveland, operating the minor-league Cleveland Barons from 2001 to 2006.

The NHL worked to keep interest in hockey alive in Ohio. The Pittsburgh Penguins, who from 1978-1991 were owned by Northeast Ohio native Edward DeBartolo, Sr., would play two "home" games at the Richfield Coliseum in the early 1990s before the arena was demolished and the land added to Cuyahoga Valley National Park. The NHL returned to Ohio in 2000 with the expansion Columbus Blue Jackets.

Dennis Maruk was the last Baron (and last Golden Seal as well) to be active in the NHL, retiring from the North Stars after the 1988–89 season with 356 goals in 888 games.