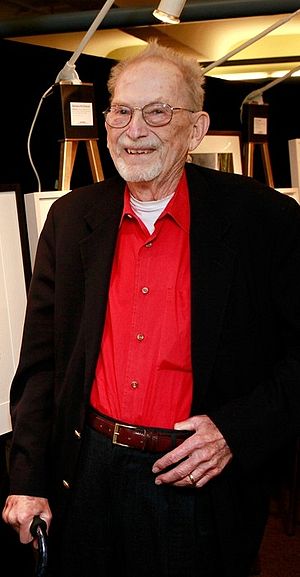 Norman Bridwell, the creator and author of the Clifford the Big Red Dog book series, in 2011.

Clifford the Big Red Dog is an eponymously titled American children's book series about a big red dog named Clifford. It was first published in 1963 and was written by Norman Bridwell (1928–2014). The series helped establish Scholastic Books as a premier publishing company,[citation needed] and Clifford himself is Scholastic's official mascot.

Clifford was the runt of a litter of puppies and was chosen by a city child named Emily Elizabeth as her Christmas present. No one expected him to grow, but Emily's love for her tiny red puppy changed him dramatically. Before long, he was over 25 feet (7.6 m) tall, forcing the Howard family to leave the city and move to the open spaces of Birdwell Island. He met friends there, including Cleo, Mac, and T-Bone. 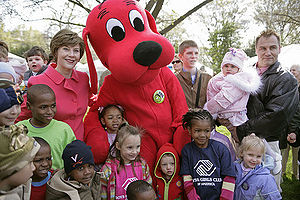 Clifford The Big Red Dog with Laura Bush and many children at the White House Easter Egg Roll, 2007.

Scholastic Studios produced a 65-episode television adaptation shown on PBS Kids, which aired from September 2000 to February 2003. Clifford was voiced by actor, John Ritter, and Emily Elizabeth was voiced by Grey DeLisle. There was also a 39-episode prequel series that ran September 2003 to October 2004. During that time, a 76-minute film was released February 2004.

In May 2012, it was reported that Universal Pictures and Illumination Entertainment would make a live-action/animated feature film based on the book. Matt Lopez had been hired to write the script, while Chris Meledandri and Deborah Forte would produce the film.[5] In July 2013, it was reported that Illumination Entertainment had dropped the project.[6] Two months later, it was reported that the film was still in development at Universal Pictures and that David Bowers was in talks to direct the film.[7] Like the 2011 film Hop, the titular dog character will be animated while the other characters will be live-action.[7] On August 1, 2014, Universal Pictures scheduled the film for a release on April 8, 2016.[8] In the beginning of 2015, the film's release date was taken over by another Universal film, Michelle Darnell.[9]