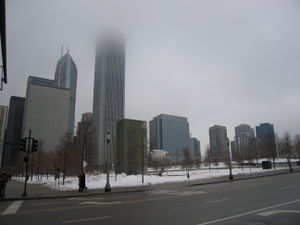 Downtown Chicago in the winter

The climate of Chicago is classified as humid continental (Köppen Dfa), with all four seasons distinctly represented: wet springs; hot, and often humid summers; pleasant autumns; and cold winters. Annual precipitation is average, and reaches its lowest points in the months of January and February, and peaks in the months of May and June.

Winter in Chicago proves quite variable: Seasonal snowfall in the city has ranged from 9.8 inches (24.9 cm) (in 1920–21) up to 89.7 in (228 cm) (in 1978–79) and the average annual snowfall in Chicago is 36 inches (91 cm).[10] Most winters produce many snow falls during the season in light accumulations of around 2 in (5.1 cm). Cities on the other side of Lake Michigan usually receive more snow than Chicago because of the lake-effect snow that falls on these communities, even though northeasterly winds can sometimes bring lake-effect snow to Chicago area too. However, every three years or so during the winter Chicago experiences a heavier snowstorm that can produce over 10 in (25 cm) of snow over a 1–3 day period, a level of snowfall very often seen in cities on the "snowbelt" on other side of the lake such as Grand Rapids, Michigan, Kalamazoo, Michigan, and South Bend, Indiana.

Based on 30-year averages obtained from NOAA's National Climatic Data Center for the months of December, January and February, Weather Channel ranked Chicago the 6th coldest major U.S. city as of 2014.[13]

Spring in Chicago is perhaps the city's wettest season: Winter conditions can persist well into April and even occasionally into May. Thunderstorms are especially prevalent in the spring time as the city's lakeside location makes it a center of conflicts between large volumes of warm and cold air, triggering many kinds of severe weather including hailstorms and small tornadoes.

Although it is extremely rare, temperatures in March can sometimes reach 80 °F (27 °C). In 2012, there were eight days with temperatures 80 °F (27 °C)+ (with a ninth day occurring in many suburban areas) during the record-breaking March 2012 North American heat wave, although the last couple of 80 degree days occurred after the spring equinox on March 20.

On the other hand, large snowfalls can also occur in late March and in early April. For example, in 1970, over 10 in (25 cm) of snow fell in a storm that occurred on April 1–2.[14] Twelve years later, Opening Day for the Chicago White Sox was postponed due to another 9 in (23 cm) snowfall that had occurred on April 5.[15] Even more extraordinary, over 18 in (46 cm) of snow fell on March 25–26, 1930, which remains one of the city's five biggest recorded snowstorms despite it occurring past the vernal equinox.[16] The average date for last measurable snowfall (≥0.1 in or 0.25 cm) is April 1.

Temperatures can vary tremendously in the springtime; at 100 °F (38 °C), March is the month with the greatest span between the record high and low. At O'Hare, temperatures as low as 7 °F (−14 °C) and 31 °F (−1 °C) have been recorded as late as April 7 and May 21, respectively. Conversely, in official records, the earliest triple-digit (100 °F or 38 °C) high occurred on June 1, 1934. More typically, the last freezing low of the season on average occurs on April 13 at Midway and ten days later at O'Hare.

On a typical summer day, humidity is usually moderately high and temperatures ordinarily reach anywhere between 78 and 92 °F (26 and 33 °C). Overnight temperatures in summer usually drop to around 65–70 °F (18–21 °C), although even in July and August there are usually several nights where the temperature drops below 60 °F (16 °C). Conversely, on the other extreme, temperatures can on a rare basis remain above 80 °F (27 °C) overnight. Chicago's yearly precipitation comes in at an average of about 36 inches (910 mm), but during the summer, rain arises from short-lived hit-or-miss rain rather than actual prolonged rainfalls, and thunderstorms also occur with regularity at night. In a normal summer, temperatures exceed 90 °F (32 °C) on 23 days. Summer is both the rainiest and sunniest season here;[17] only the three months of June thru August experience more than 65% of possible sunshine.[8]

In July 2012 Chicago reached and exceeded 100 °F (38 °C) for three consecutive days at O'Hare Airport with highs reaching 103 °F (39 °C) in the city and many suburban areas recording temperatures between 105 and 110 °F (41 and 43 °C). It was the first time in sixty-five years that Chicago had ever seen a triad of 100 °F days.[18] Chicago nearly recorded a fourth consecutive day at or above 100 °F, but the temperature reached 98 degrees at O'Hare in late morning before a slight cool front came through the area and cooled temperatures off slightly. Despite this, many suburban areas still reached or exceeded 100 °F for a fourth consecutive day.

Although considered "unofficial", during the Dust Bowl years, Midway Airport recorded a record eight consecutive 100 °F-plus days in July, 1936. This is not shown in the official records because until 1942, records were taken at the University of Chicago, which is close to the lake, which reduces temperatures in the immediate shoreline area in the summer. In that heat wave, temperatures at the lake remained in the middle and upper 90s Fahrenheit (middle 30s Celsius), whereas Midway Airport broiled in the 100s Fahrenheit (upper 30s to low 40s Celsius) for over a week, and further west in what would today be the near and far suburbs (e.g. DuPage County and westward), temperatures reached a blistering 110 °F or still higher.

Fall, in some ways, is a calmer season than any of the other three in Chicago. This does not mean that wild weather can't happen. The first freeze of the season on average occurs on October 24 at Midway and 11 days earlier at O'Hare. In many years, a period of warm weather, known as an Indian summer, occurs well after the autumnal equinox has occurred. In these so-called Indian summers, extremely warm weather can last for several days. For example, during the 2005 American League Division Series, for both home games between the Chicago White Sox and the Boston Red Sox, temperatures exceeded 80 °F (27 °C), despite the fact that it was already well into October. On top of that, during the same warm stretch in October 2005, for two consecutive days the overnight temperature failed to drop below 70 °F (21 °C), an extraordinary occurrence for Chicago in early autumn.

Fall can bring rain showers, many of which are capable of producing flooding. As the winter solstice nears, the threat of a major winter or snowstorm grows, and there have been major winter storms around the Thanksgiving holiday, causing major delays at the city's two major airports. The first measurable (≥0.1 in or 0.25 cm) snow on average falls on November 19. However, on December 20, 2012, the record for latest first measurable snowfall, besting the record of December 17, 1899. The autumn and early winter of 2012–13 did not see a daily maximum temperature below freezing 32 °F (0 °C) until early January 2013, and the entire calendar year of 2012 did not record a temperature lower than 5 °F (−15 °C). The largest snowstorm before the winter solstice dropped 14.8 inches (380 mm) at Midway Airport in December 1929.

The highest temperature ever recorded in Chicago is an unofficial 109 °F (43 °C) on July 24, 1934, at Midway Airport. The official reading of 105 °F (41 °C) for that day was taken at the University of Chicago campus near the waterfront, and is the highest official temperature ever recorded in the city.[19] Readings near the lake can be several degrees cooler than inland locations if lake breezes are present, which suggests that the higher unofficial reading may also be accurate. During the Chicago Heat Wave of 1995, official temperatures reached 104 °F (40 °C) at O'Hare Airport and 106 °F (41 °C) at Midway, but high humidity pushed the heat index to 15–20 °F (8–11 °C) above actual air temperatures. The coldest temperature ever recorded in Chicago is −27 °F (−33 °C) at O'Hare on January 20, 1985. Due to the urban heat island, the city of Chicago is often warmer in winter than the suburbs, and unofficial temperatures as low as−33 °F (−36 °C) have been recorded at Chicago Aurora Airport in far western suburbs and in the rural areas to the west of Chicago.[20] On December 24, 1983, and January 18, 1994, the high temperature reached only −11 °F (−24 °C), and on July 29, 1916, the low temperature sank to only 85 °F (29 °C), both of which are all-time records.

Although Chicago is known as the Windy City, it is in fact less windy than many other major American cities. Average wind speeds range from 8 miles per hour (13 km/h) in late summer to 12 miles per hour (19 km/h) in spring months. The "Windy City" moniker is believed to actually be a reference to the boostering politicians of Chicago from the 1800s. The phrase may have also been created by Chicago tourism boosters promoting the city, suggesting that the cool breezes from Lake Michigan make Chicago an ideal summer destination. It could also be because of extreme wind drafts around the high rise buildings.

Chicago can be cooler and moister than other parts of Illinois because of its proximity to the relatively cooler waters of Lake Michigan, effects which are most pronounced during spring and early summer. A frequent lakeshore breeze pushes much cooler, moister air into Chicago than the usual hot air of the Plains States (usually a moist air mass depending on upper level circulation), but the effect can be so localized that only the immediate waterfront neighborhoods (both north and southside lake adjacent communities) are cooler than inland parts of the city. South, west and southwestern suburbs can be more than 20 °F (11 °C) warmer than the lakefront at some times of year.[citation needed] The lake breeze also has other effects, including dense fog spilling into the city. Because of the closed-loop circulation pattern with a lake breeze that moves back and forth across the city, it is thought to significantly increase low-level ozone counts.[21] Differing wind direction on either side of the thermal dividing line allows for sharp updrafts under certain conditions, favorable to thunderstorm development. Offshore or land breezes shutdown the lake breeze and can have the opposite effect, with over lake convection occurring, usually in mid-late summer and fall. As a general rule, the opposite trend occurs during the winter—winter temperatures are warmer along the lakeshore and downtown than inland.