From Infogalactic: the planetary knowledge core
Jump to: navigation, search
This article is about the family related to Bill Clinton. For other Clinton families, see Clinton. 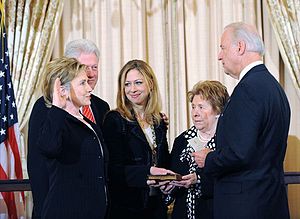 The Clinton family or Clinton-Rodham family is a prominent American political family related to the 42nd President of the United States, Bill Clinton, who was in office for two terms from January 20, 1993 until January 20, 2001.

Bill Clinton's father, William Jefferson Blythe, Jr. (February 27, 1910 – May 17, 1946), was a traveling heavy equipment salesman who died in a car crash three months before Bill was born.[1] Blythe was born as one of nine children to William Jefferson Blythe, Sr. (1884–1935), a poor farmer in Sherman, Texas, and his wife, the former Lou Birchie Ayers (1893–1946). He was of English and Scots descent, with family lines in North America since the days of the thirteen colonies.[2] Blythe was married four times: first to Virginia Adele Gash in December 1935, whom he divorced thirteen months later. This marriage produced a son, Henry Leon Ritzenthaler (1938-2009). Blythe married again to Minnie Faye Gash, sister of Virginia, in December 1940. This marriage was annulled in April 1941. He married a third time in May 1941 to Wanetta Ellen Alexander, who had become pregnant to him while still married to Minnie Faye Gash. They had a daughter, Sharon Lee Blythe Pettijohn, who was born May 11, 1941 and is still alive. They formally divorced in April 1944, however Blythe had already married Virginia Dell Cassidy in September 1943. Their marriage ended upon his death in May 1946, three months before Bill Clinton was born. Virginia did not learn about Blythe's previous marriages until decades later.[3] 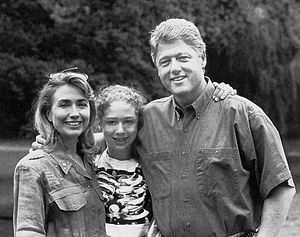 Hillary Diane Rodham Clinton's father, businessman Hugh Ellsworth Rodham, was born on April 2, 1911 in Scranton, Pennsylvania and died of a stroke on April 7, 1993 in Little Rock, Arkansas at the age of 82. Descended from coal miners, Rodham's parents were Hugh Rodham (1879-1965) and Hannah Jones Rodham (1882-1952). His father was from County Durham in northern England, while his mother was born in Pennsylvania to Welsh immigrants from Merthyr Tydfil.[5] Rodham married Dorothy Emma Howell in early 1942.[6][7] In addition to Hillary Rodham Clinton, the Rodham family also includes her brother Hugh Edwin Rodham (born May 26, 1950). Hugh Rodham ran for the United States Senate seat from Florida in 1994, winning the Democratic nomination to radio talk show host Mike Wiley but losing to incumbent Republican candidate Connie Mack III.[8][9] after earlier finishing first in a four-person primary field with 34 percent.[9] Hugh is married to Maria Victoria Arias. Hugh and Hillary's brother Anthony Dean Rodham (born 1954; usually known as Tony Rodham) is a consultant and businessman. In May 1994 Rodham married Nicole Boxer, daughter of California senator Barbara Boxer at the White House in a ceremony attended by 250 guests. It was the first White House wedding since Tricia Nixon married Edward F. Cox in 1971.[10] The couple had one child, Zachary, who was born in 1995. They separated in 2000 and later divorced. In the summer of 2005, Tony Rodham married Megan Madden of Vienna, Virginia.[11] The couple have two children, Fiona and Simon, and settled in Vienna.

Hillary's mother Dorothy Howell was born in Chicago, the daughter of Edwin John Howell, Jr. (1897–1946), a Chicago firefighter,[6] and Della Murray (1902–1960).[12] Her sister is Isabelle Howell (born 1924).[6] Her ancestry included Welsh, English, Scottish, French, and distant Dutch; her paternal grandfather was an immigrant from Bristol in Gloucestershire, and many of her recent forebears had lived in Canada.[12] Dorothy Howell Rodham died on November 1, 2011 due to heart failure.[13][14][15]

Bill and Hillary Clinton's daughter Chelsea Victoria Clinton was born on February 27, 1980 in Little Rock, Pulaski County, Arkansas while her father was Governor of Arkansas. On July 31, 2010, Clinton and investment banker Marc Mezvinsky were married in an interfaith ceremony in Rhinebeck, New York.[16] Mezvinsky (born December 15, 1977) is the son of former members of Congress Marjorie Margolies-Mezvinsky and Edward Mezvinsky, and was raised in the Conservative Jewish tradition.[17] The senior Clintons and Mezvinskys were friends in the 1990s and their children met on a Renaissance Weekend retreat in Hilton Head Island, South Carolina.[17] They first were reported to be a couple in 2005, and became engaged over Thanksgiving weekend in 2009.[18] Clinton announced in April 2014 that they were expecting their first child.[19] She gave birth to their daughter, Charlotte Clinton Mezvinsky, on September 26, 2014.[20] Chelsea Clinton worked as an NBC reporter and currently works with the Clinton Foundation.[21] Clinton announced in December 2015 that they are expecting their second child in the summer of 2016.[22] 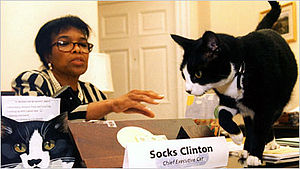 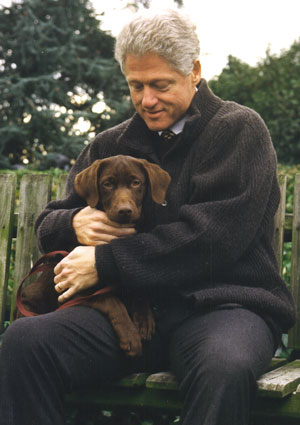 While living in the White House the Clintons had two pets: a cat named Socks and a dog named Buddy. Socks, born about 1989, was adopted by the Clintons in 1991.[23] The cat was left under the care of Bill Clinton's secretary Betty Currie, residing with her until Socks' death on February 20, 2009, euthanized due to cancer of the jaw.[24] Buddy, a Labrador Retriever born on August 7, 1997, was acquired by the Clintons on December 5, 1997. Buddy was named after Clinton's late great uncle Henry Oren Grisham, nicknamed "Buddy". The Clintons kept Buddy after they left the White House in January 2001 however the dog was hit by a car on January 2, 2002 and died.[25] The two pets were reported to not get along.[26] Clinton adopted a new dog in 2005, whom he named Seamus.[27]

Clinton was the third female Secretary of State and the first former First Lady to hold political office. In addition, she ran for president in 2008 and is running in 2016.